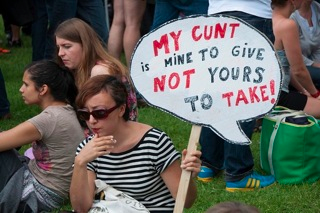 While the world is only just coming to terms with saying the word vagina out loud, cunt remains a term that takes people’s breath away as they cringe at the sheer power it contains. Pushed underground, banished from conventional language, cunt has long since been appropriated by patriarchs and misogynists and used as an utterance that disgusts or insults in the worst possible way.

But cunt has not always been the most taboo word around. It was originally a term used to revere the wisdom of women, in particular the wisdom of her genitals. In pre-agrarian days, cunts were tacitly celebrated as purveyors of pleasure and knowledge.

Vaginas, on the other hand, have often been the locale of war, violence and disdain since the inception of patriarchy – that cruel, women-hating inclination which saw female bodies become sites of restraint, control and oppression.

The etymology of vagina dates back to the 1680s. From Latin, it means a sheath or scabbard in which to thrust a sword. So the word contains the notion that a vagina is something to be potentially violated–entered forcefully with a weapon of war.

It can be no mistake that the term originated at about the time of insane witch hunts in Europe that saw thousands of women being raped, tortured and burned at the stake–apparently because vagina-bodied people were evil, their sexuality unbridled. Women were often accused of having intercourse with the devil himself.

Despite modernity, the contemporary vagina continues to be a locale of violence, suffering and exploitation. Stories now flood the media around issues pertaining to this contested and vilified part of the female anatomy, mostly centered on violence towards women or the pornification and pacifying of women’s bodies.

The scourge of rape is also as high or higher than ever, being used as a weapon in wars premised on land grabbing and the seizing of natural resources. In the Congo, for example, hundreds of thousands of women have been raped by marauding militias that are often funded by multinationals.

In the West, we see vagina-cruel practices such as vagina bleaching, vagina tightening and labiaplasty. In the United States, the uber-misogynistic war on the vagina which has recently taken on the form of a veritable witch hunt, with absurd and backward legislation put forth to stifle women’s reproductive rights. In Africa and parts of the Middle East, especially, we see forced genital mutilation (FGM). Rape takes place everywhere. Vagina violation and vilification is a global phenomenon.

But on the other side of the spectrum, we have the those who fight for the rights of the vagina to be free, in all her natural, hair-covered, musky, fragrant, quirky, curled, creased, folded, humid, orgasmic, beautiful self: from Eve Ensler’s The Vagina Monologues to artist Jamie McCartney’s Great Wall of Vagina to the Russian anarchist punk protest group Pussy Riot to the many ordinary women reclaiming words such as vagina and slut to the women in Africa who rescue young women from FGM and early marriage. It seems that the more some try to push the vagina underground, the more others make it center stage.

When we look to the etymology of the word cunt, it has a much more celebratory and empowering origin than vagina.

Etymologist Eric Partridge, writes in his book A Charm of Words that the the prefix “cu” is an expression of “quintessential femininity,” confirming “cunt” as truly a woman’s term. Tony Thorne, in his Dictionary of Contemporary Slang writes; “The synonymy between ‘cu’ and femininity was in place even before the development of written language: In the unwritten prehistoric Indo-European languages ‘cu’ or ‘koo’ was a word base expressing ‘feminine’, ‘fecund’ and associated notions.”

Matthew Hunt, who draws from the above writers in his offerings on the history of cunt, says that the Proto-Indo-European “cu” is also cognate with other feminine/vaginal terms, such as the Hebrew “cus;” the Arabic “cush,” “kush,” and “khunt;” the Nostratic “kuni” (woman); and the Irish “cuint” (cunt). He goes on to say that the word cunt is inherent in many goddess’s names such as the Indian goddess Kunt and the energy force known as Kundalini.

Furthermore, while the word vagina implies a singular orifice for organ, cunt speaks of the textured nature of female genitals and includes the vulva, clitoris, labia and canal. Cunt speaks of the multidimensionality of women’s sexual pleasure–not just the sheath in which a man can thrust his erection. It denotes a sexuality that is rooted in pleasure and orgasm, not one denied orgasm by patriarchal doctrine.

I believe that the word cunt has to be dug up and given a good historical dusting so that the beauty, force and power of the word is  reinstated into the feminine discourse. When women finally reclaim and speak this word, its full potential will be released and women will repossess their collective cunt-power and rise up against misogyny and patriarchy with the absolute intent of ending it.

(The author is currently making a film entitled C is for Cunt, which explores the etymology of taboo feminine words.) Watch the trailer below.

Feminist, filmmaker, writer, poet, activist and author, Gillian Schutte has a degree in African politics, an MA in Creative Writing and a Film Director's qualification from the Binger Institute, Netherlands. Winner of the Award of Excellence for her documentary entry to the Society for Visual Anthropology Festival in Washington, 2005, and author of the novel After Just Now -- Schutte fearlessly and creatively tackles issues of race, identity, sexuality and social justice in her multimedia work. She is founding member of Media for Justice co-owner of handHeld Films. and co producer of the online Reality TV series The Schutte Singiswas'.