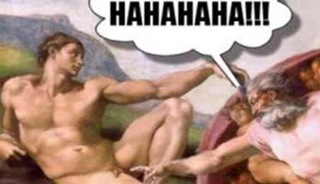 Let’s just get it out there for once and for all. Do black men have bigger penises than white men and is this what all the fuss over the past 350 years has been about? Or is the legend of the oversized black cock nothing more than a construct concocted by white men in order to subjugate both black men and all women – then reign supreme, along with their flesh-hued, veiny members?

A paper on the issue of white supremacy and patriarchy reflected in the mass media in the US is what prompted this particular line of thought and found me doing some fairly ardent investigation into a South Africa version of the topic.

Starting at the most obvious point I ask my circle of multiracial female friends (some of whom are in interracial relationships and some of whom have had more than 100 lovers of every shade) a lot of penis-related questions.

Based on this informal survey at least – it becomes clear to me that the myth of the huge black penis is just that – a myth. And that’s not to say that some black men do not have humungous penises, but so too do some white men – and let’s throw some Asian men in for good measure. It seems that in every racial category there are well-hung men, men with average-sized penises and then those with littlies.

Throwing myself into this inquiry with gusto I soon discover that in both the US and in Africa, our white colonial forefathers misled our poor Caucasian female ancestors into believing that every black man had a voracious desire to bed or rape her, and therefore had to be kept down by whatever brutal means necessary.

I also learn that our white male ancestors were of the opinion that since “bestial” black men with “devilishly huge penises” desired white women, they may as well show them whose boss and seize their black women first.

At this point it becomes plain to me that the huge-black-penis is no more than a cock-and-bull story, historically constructed as the white man’s devious tool of oppression and power – a crafty hypothesis set up to achieve at least three things.

1. Enslave black folk since they were deemed animalistic and this was proven through the spreading of propaganda vis a vis their animalistic male genitalia.

2. Assuage any feelings of guilt by dehumanising and demonising the black man to such an extent that brutal treatment of that race group was justified.

3. Sexualise and exploit black women while using the constant threat of the “black sexually rampant rapist” to control white women.

Little did they know that this dubious invention would turn around and bite them on their lily-white butts one day – as on that day in South Africa when power shifted from the white-supremacist males of our former regime to the black previously oppressed males of our current regime. And look what happened? In no time the white-controlled advertising industry portrayed images of handsome, materially successful black men holding hands with petite blondes and even impregnating them for god’s sake.

Had the construct of the big-black-penis ultimately become entrenched in the white male psyche as a truism and was this a hasty admission by the white South African male to say: “We know you’ve now got the political power, and on top of that you have huge dicks, so we will bow out graciously and acknowledge that white women will be clamouring at your impossibly huge penises sooner or later.”

Or perhaps it was the opposite and they were merely following in the footsteps of their wily progenitors, realising that while they no longer wielded political power they still had control over the advertising industry and could therefore find a way to conquer their own penis-based feelings of inadequacy while asserting their hegemonic status. How? Well by capturing, sexualising, trivialising and marketing the black male image, thereby asserting control over the black man’s penis (not to forget the white woman’s vagina).

But seldom was the black male seen in computer or business-related adverts.

Was this sublime messaging sinister testimony to the white male belief that they are inherently intellectually superior to the rest of the inhabitants of the world and should therefore reserve the “brains and intelligence” niche for themselves while feminising, objectifying and metaphorically castrating the black male?

In a flash of forensic insight it occurs to me that this historical cock-and-bull story is a long way from over.

Published in Equality and Media

Feminist, filmmaker, writer, poet, activist and author, Gillian Schutte has a degree in African politics, an MA in Creative Writing and a Film Director's qualification from the Binger Institute, Netherlands. Winner of the Award of Excellence for her documentary entry to the Society for Visual Anthropology Festival in Washington, 2005, and author of the novel After Just Now -- Schutte fearlessly and creatively tackles issues of race, identity, sexuality and social justice in her multimedia work. She is founding member of Media for Justice co-owner of handHeld Films. and co producer of the online Reality TV series The Schutte Singiswas'.