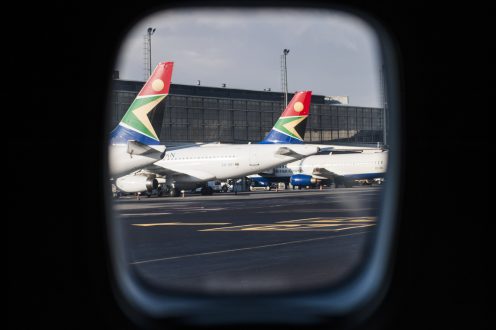 I love going to the movies, enjoying the popcorn, and switching off my phone for the duration of the movie. The cinemas, along with flying, are two of the last escapes we have from the bombardment of life in the smartphone age. This last weekend I sat down to watch a film that I have been eagerly anticipating: Ford vs. Ferrari. The plot follows Ford’s mission to dethrone the ever-dominant Ferrari at the 24 Hours of Le Mans race in 1966. Since watching the film I have found my mind wandering to the comparisons between Ford’s singular focus and the much more recent turnaround story of the Springboks. My mind, however, also wandered towards thinking about SAA, especially since I watched the movie the day after last week’s nationwide strike ended.

Simply stating that the road ahead for SAA is difficult would be a gross understatement. Aside from their financial and operational woes, their task is compounded by the fact that public sentiment is so adamantly against them. A recent News24 poll showed two things clearly. Firstly, that the topic of SAA is emotive. That poll was the most responded to poll they have had on their website in the last two months, even beating out an outcomes poll on the Rugby World Cup final and leaving polls on the SABC and Eskom falling far behind. The second point was the sheer one-sided nature of the responses. Just two options, ‘selling SAA’ and ‘supporting retrenchments’ out of the four they gave on the poll accounted for nearly all responses (95%) to the poll.

But there is reason to hope. Just because an airline makes a loss, even one as bad as SAA, does not mean it is beyond saving. Close to a decade ago Qantas, the flag carrier for Australia, was mired in industrial action and heavy financial losses. Yet today it is one of the best performing airlines in the world. Its close neighbour, Air New Zealand was just this week named the world’s best airline, showing us that far flung airlines can work. Both Ford and the Springboks task seemed insurmountable when they began, which make their triumphs even sweeter. However, both the Ford and Springbok stories started with some sort of dramatic change to a singular vision.

In Ford vs. Ferrari, Carroll Shelby, the racing team lead, famously tells Henry Ford II, “You can’t win a race by committee”, referring to Ford’s bureaucrats’ incessant interference, when explaining why the team had underperformed on their first try at Le Mans stated. This is just as true for SAA as it was for Ford back then, and today. The inability to reform and adapt are one of the main reasons for airline failures. Instead, State-run organisations are more commonly associated with overregulation, overstaffing, excessive debt, political interference and poor management.

I’m not opposed to a state-owned airline, but I am opposed to a purely state-run airline. Privatising national airlines sounds like a logical step, but many privatisations end in failure, giving governments reason to hesitate. However, what is often painted as an either-or option is in fact not. Both Singapore and Emirates are listed in the top 10 airlines in the world for 2019, and neither is state run, but both are state-owned. Just because SAA is state-owned, does not mean it has to be state-run. This would give the airline the ability to do the things that a fully private company may not be willing to do, but also would allow it to become everything that it needs to be.

Having our government own, but not run something, is not completely foreign. Prior to selling its 13.9% stake in Vodacom to fund Eskom, the South African Government received a steady inflow of dividends annually, to the benefit of citizens.

We should hope and demand change at SAA. Just like the examples of Ford and the Springboks, they show us that winning can have a bigger impact on society than the win itself. A good turnaround can unify an organisation or even a nation, but we need to keep on winning. The importance of SAA goes beyond the simple bottom line. Aside from a well-run airline being a source of pride for a nation, it can meaningfully connect this country to the rest of the continent and the world. SAA should be an ‘Embassy with wings’, showcasing the best of our culture, our artists, sport, food, innovation, providing employment that people can be proud of, contributing to tourism and supporting the decision to invest, rather than detracting from it. Lastly it should unify us, to a far greater degree than the Springboks, bringing back national pride instead of showcasing the embarrassment that a large loss-making airline gives us now.

Dale is trained as an economist and has eight years’ experience as a policy and strategy analyst with specialisations in strategic foresight and behavioural insights. He holds a master’s in economics from Stellenbosch University and more recently completed the Scenario Planning Programme at the Said Business School, Oxford University. He writes in his capacity as a Mandela Rhodes Scholar.