Soccer fever will pick up before the World Cup

International interest in the Fifa World Cup is expected to pick up about nine months before kick-off in June 2010 based on data supplied by Google.

We determined that interest started in September 2005 by looking at which relevant World Cup keywords were popular on Google in the run-up to the World Cup in Germany in 2006. 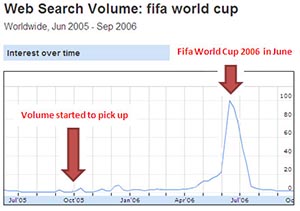 From a marketing point of view, the internet is going to be the primary source of information on the World Cup for our foreign guests. We should therefore focus on delivering a solid, sophisticated internet experience and provide them with the information they require.

Most of our foreign guests will use search engines (Google, Yahoo) to find information, hence it is important to note the different terms people use to search for information on the internet.

Focus on specific keywords like Fifa World Cup or World Cup 2010 to achieve a ranking in the search engines. If, for example, you focus on the keyword “Fifa”, you will compete with soccer gaming websites (Electronic Arts publish a wildly popular game series called Fifa 2009). If you focus on the keyword “2010”, you will compete with every date on the internet. You will not show up in the search engines.

I’m very excited about the tournament and urge businesses to be ready for the Cup. Ensure you’re providing relevant information that can easily be found and that you have the capacity to deliver during the tournament.

Ferdie Bester is founder and MD of ClickMaven, a leading Internet Marketing company in South Africa. He's a reformed accountant turned marketer and loves the fact that everything online can be measured.