A doctoral student in philosophy at the University of the Free State, Mark Amaridakis, recently reminded me of the important contribution made to philosophy — specifically the Critical Theory of the so-called Frankfurt School — by Max Horkheimer, one of the Frankfurt Institute for Social Research’s early directors. This made me pick up one of my books by Horkheimer – Critical Theory: Selected Essays (Continuum, New York, 2002) – which afforded me the rare pleasure of reading again some of the work of this early master of Critical Theory. 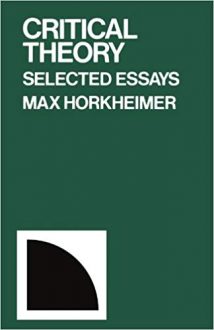 Horkheimer is probably known best by teachers and students of philosophy for his co-authorship, with Theodor Adorno, of a sometimes elliptical, but nevertheless illuminating book, Dialectic of Enlightenment, published in the 1940s at a time when the world was in the throes of a catastrophic war. This fact goes a long way towards explaining its sombre, pessimistic tone and its theme of the paradoxical metamorphosis of the historical process of enlightenment into a form of enslavement, by a transmogrified reason in the guise of technical-instrumental and administrative rationality. Recall that enlightenment is usually associated with the 18th- century Enlightenment, or discovery of universal reason, as the force capable of liberating humanity from fear of nature, superstition and from political oppression, then the irony of a situation of universal social misery — depicted by Horkheimer and Adorno in this classic text — will become apparent.

It hardly requires a genius to realise that today humanity still faces a situation of ‘universal social misery’, despite proponents of the currently hegemonic economic system claiming otherwise — a brief reflection on the provenance of the saying, the 1% versus the 99%, should clarify what is at stake here. This obviously raises the question — at least to socially concerned world citizens – what ought to be, and can be, done to alleviate the present situation. 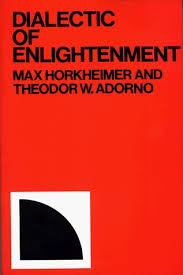 More pertinently for someone like myself, a practitioner of philosophy, is there anything one might expect philosophy to be able to contribute to resolving the persisting conditions of suffering globally?

In the essay, ‘The Social Function of Philosophy‘, Horkheimer has some interesting ideas in this regard, articulated in the context of the curious fact that, among the disciplines, philosophy is probably the only one that people cannot readily ‘place’ in society. Think about it — any reasonably informed person has hardly any difficulty locating medicine, law, chemistry, art, history, psychology, and so on, within a specific social field regarding its role or function. Yet, when it’s philosophy’s turn, they are usually at a loss, except perhaps for locating philosophy institutionally, that is, in the university. But does it have a social function beyond ‘higher education’?

Which is not the same as a ‘use’, by the way; as far as disciplines are concerned, a ‘use’ can only be ascribed to something like civil engineering, or psychology, for obvious reasons: the former studies and indicates the techniques for constructing something like a bridge, while the latter examines the functioning of the human psyche with a view to therapeutic intervention when needed. Clearly, philosophy does not have such a clearly delineated ‘use’, although practitioners of philosophical counselling might disagree. In my view, all that such counsellors can do is to clarify concepts for clients, and it is up to the latter to find ways of benefitting from this. Even the very ‘definition’ of philosophy – let alone the social function, if it has one – is problematical. Comparing the other disciplines with philosophy, Horkheimer states (2002: 253):

It is different with philosophy. Suppose we ask a professor of philosophy what philosophy is. If we are lucky and happen to find a specialist who is not averse to definitions in general, he will give us one. If we then adopt this definition, we should probably soon discover that it is by no means the universally accepted meaning of the word. We might then appeal to other authorities, and pore over textbooks, modern and old. The confusion would only increase. Many thinkers, accepting Plato and Kant as their authorities, regard philosophy as an exact science in its own right, with its own field and subject matter. In our epoch this conception is chiefly represented by the late Edmund Husserl. Other thinkers, like Ernst Mach, conceive philosophy as the critical elaboration and synthesis of the special sciences into a unifi“ed whole…

If most writers of philosophical works agree on the scientific character of philosophy, a few, but by no means the worst, have emphatically denied it. For the German poet Schiller, whose philosophical essays have had an influence perhaps even more profound than his dramas, the purpose of philosophy was to bring aesthetic order into our thoughts and actions. Beauty was the criterion of its results. Other poets, like Hölderlin and Novalis, held a similar position, and even pure philosophers, Schelling for instance, came very close to it in some of their formulations. Henri Bergson, at any rate, insists that philosophy is closely related to art, and is not a science.

What, then, remains for philosophy as a possible social function, if an attempt at finding an agreed-upon ‘definition’ of philosophy provides no guidance in this respect? I am reminded of my mentor at Yale University, Karsten Harries, often reminding his students that philosophy mostly has questions to contribute, instead of (conclusive) answers. This resonates with Horkheimer’s allusion to Socrates (2002: 257):

Ever since the trial of Socrates, it has been clear that they [philosophers] have a strained relationship with reality as it is, and especially with the community in which they live. The tension sometimes takes the form of open persecution; at other times merely failure to understand their language. They must live in hiding, physically or intellectually.

What Horkheimer is referring to here is, of course, the well-known episode in ancient Greece when Socrates – who ‘did not acknowledge the gods of the city’ – was condemned to death because of his philosophical questioning of convention. In this way Socrates bequeathed to all philosophers after him the legacy, or ‘social function’, of questioning, as rigorously as possible, all conventional, ostensibly self-justifying assumptions and social practices. Horkheimer phrases this insight as follows (2002: 257):

The opposition of philosophy to reality arises from its principles. Philosophy insists that the actions and aims of man must not be the product of blind necessity. Neither the concepts of science nor the form of social life, neither the prevailing way of thinking nor the prevailing mores should be accepted by custom and practiced uncritically. Philosophy has set itself against mere tradition and resignation in the decisive problems of existence, and it has shouldered the unpleasant task of throwing the light of consciousness even upon those human relations and modes of reaction which have become so deeply rooted that they seem natural, immutable, and eternal.

Again, showing the extent to which Horkheimer has incorporated the Socratic understanding of philosophy as a practice into his own dialectical thinking: (2002: 263-264):

The real social function of philosophy lies in its criticism of what is prevalent. That does not mean superficial fault-finding with individual ideas or conditions, as though a philosopher were a crank. Nor does it mean that the philosopher complains about this or that isolated condition and suggests remedies. The chief aim of such criticism is to prevent mankind from losing itself in those ideas and activities which the existing organisation of society instils into its members.

This was precisely the issue in the trial of Socrates. Against the demand for submission to the customs protected by the gods and unquestioning adaptation to the traditional forms of life, Socrates asserted the principle that man should know what he does, and shape his own destiny. His god dwells within him, that is to say, in his own reason and will. Today the conflicts in philosophy no longer appear as struggles over gods, but the situation of the world is no less critical. We should indeed be accepting the present situation if we were to maintain that reason and reality have been reconciled, and that man’s autonomy was assured within this society. The original function of philosophy is still very relevant.

And one could add that, although these words were written by Horkheimer decades ago, they are still as pertinent to the role of philosophers in society as they were then. Moreover, it is obvious what contemporary society ‘instils into its members’, and should be the object of philosophical criticism.