In the later 19th century there was a protracted debate among thinkers of various stripes about the question, what ultimately determines human actions — ‘nature’ or ‘nurture’ — a debate that is still going on today. But while it was then influenced by the evolutionary theory of Charles Darwin, on the one hand, and empiricist philosophy, on the other, today it is the science of genetics (arguably the heir of evolutionary theory) and, broadly speaking, the social sciences, which influence the debate.

Just to be clear, Darwin’s theory of evolution seemed to imply that what we are is the result solely of evolutionary adaptations to changed natural (and by extension, social) circumstances, while 19th-century empiricist thinking argued that, if all knowledge comes from experience, human experience should (and could) be changed by modifying the social environment in which people lived ‘for the better’. Hence various forms of ‘social engineering’.

Some years ago there was an issue of TIME magazine in which the cover article was on precisely this question, and I recall the writer came to the judicious conclusion – with which I agree — that neither nature nor nurture predominates; instead, he or she said, it could be described as a ‘dance between the two’, implying that both contribute equally to the direction in which things develop, so that a balance of sorts would prevail in the end.

And yet, in the face of accumulating evidence of various countries — Russia, China, the US, Japan, North Korea and others — pursuing a new arms race, one wonders whether this ‘dance’ has ended, with only naked natural, or perhaps (on the other hand) social, impulses, in the form of aggression, taking over. These developments have apparently prompted erstwhile Russian leader Mikhail Gorbachev to remark that the world seems to be ‘preparing for war’, to which one could add numerous other symptoms of human aggression, not only towards other people, but animals as well, judging by the deluge of petitions sent one’s way by anti-cruelty-to-animals petition sites concerning the gratuitous killing of innocent animals and birds.

Regarding our own dear, and naturally speaking, beautiful country, I need not even elaborate — the spate of attacks, robberies and killings reported in the various media do not show any sign of letting up. Needless to say, it makes one despair for the future of South Africa as a supposedly civilised country. Small wonder that foreign visitors to our country are appalled by what they encounter here (I am speaking from experience), despite the ameliorating effect of their enjoyment of our mountains and beaches. 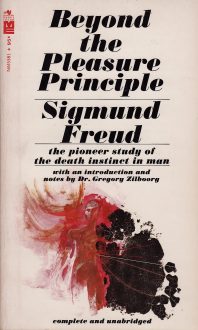 One of the spheres of concentrated human activity in the age of the internet is precisely that which is made possible by the latter, namely the sphere of cyberspace. In this sphere — as in everyday social space — there is today every indication of the unceasing struggle between what Freud (in Beyond the Pleasure Principle and in Civilisation and its Discontents) called the constructive, life-giving force of Eros and the sometimes conservative, as well as aggressively destructive, and ultimately victorious, death drive, Thanatos.

If anyone still believes that human beings will ‘regulate’ their own activity ethically in cyberspace, and that government agencies are redundant in this regard, recent happenings argue unambiguously for such government control. Don’t get me wrong, at heart I am a ‘philosophical anarchist’ — not, as most people believe, someone who promotes chaos, but instead someone who believes that human beings are ‘potentially’ (if not ‘actually’) capable of governing themselves, and that we should be able to get along without governments — I certainly am capable of doing this, and so are people I call my friends.

It is not always individual agents who perpetrate such ethically reprehensible deeds in cyberspace, either. Confirming my own misgivings about capitalist companies with only one goal in mind, namely to push their profits up even higher (no matter what the human cost), a recent report listing the colossal fine (€4.3-billion) slapped on internet giant, Google, by the EU’s Competition Commissioner, Margrethe Vestager, indicates that she is explicit about the growing need to rein in large technology companies’ ‘misuse’ of ‘data and failing to respect citizens’ rights’. She referred to new EU data rules as providing ‘some protection’, but admitted in an interview with the BBC that this was not sufficient:

‘Over these 12 months our relationship with tech has both been darker and more muddy because it becomes increasingly clear that all the bright and shiny positive potentials of tech are at the risk of being darkened by forced misuse of data, manipulation, supervision, no respect of the citizen, no respect of individual rights,’ she told Martha Lane Fox who carried out the interview.

‘There is an increasing awareness of the fact that we really need to do something and to do that together.’

In addition to the fine incurred by Google for illegally reinforcing its dominance as a search engine, the report lists the following instances of companies’ ethical abuses:

 ‘Facebook having to apologise for letting 87-million users’ details be harvested, many of which were obtained by the political consultancy Cambridge Analytica

Small wonder that there are indications of ‘big changes’ coming to the way one is able to use the internet — from social media regulation and age restriction for access to pornography, to the introduction of digital copyright law and what is known as ‘the right to be forgotten’ (pertaining to the removal of outdated information on the internet).

Hence one might say that ‘I rest my case’, in light of abundant evidence that in the current era human beings show no sign of what one might call ‘ethical improvement’; quite the contrary — the aggressive side of the Freudian death drive is undoubtedly in the ascendant, but the jury is still out on the question, whether this is because of human ‘nature’ or ‘nurture’. In my own humble opinion it is a bit of both.