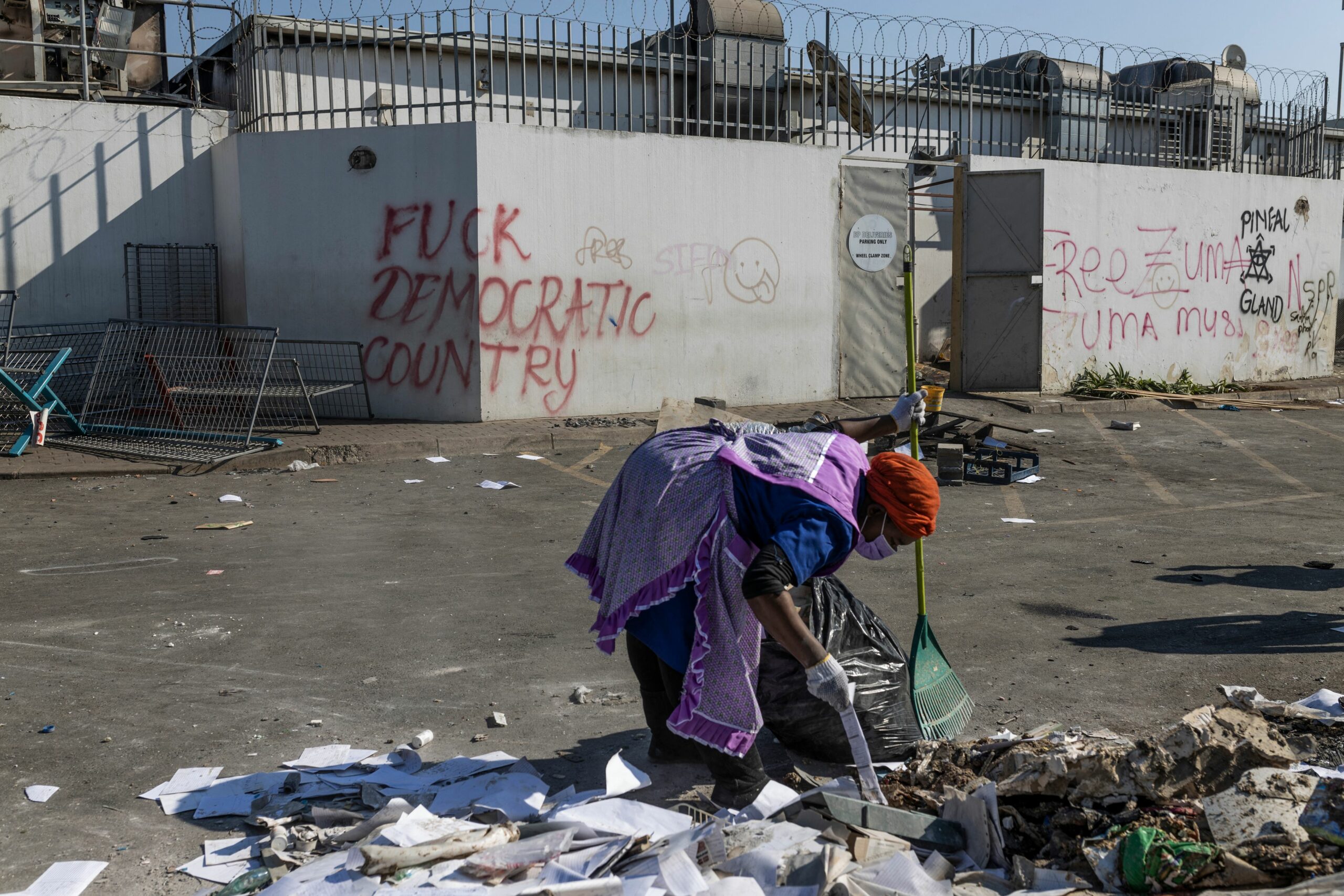 My arm is still sore from the Covid vaccine I received the day before yesterday. After what seems like years of exile in my home, I queued for three hours in a multi-storey car park; concrete and grey with ancient cold.

I left vaccinated. Finally, the years that the locust had eaten were now over. Perhaps.

By now, the few days of rioting that had contorted our country had passed. It started with a protest on the N3. Planned or unplanned or semi-planned, it spread across the country faster than the coronavirus ever had. Probably more destructive too.

For reasons not entirely clear to me, a group of us set off in an Uber Van soon after, determined to participate in one of the many clean-up projects underway throughout the city, throughout the country.

The bowel of our consumer society loosed upon the streets. Scattered.

Woodford whiskey. You deserve it. The real beer for real men. Vodacom. Further together. Just do it. No sugar added. I’m lovin’ it. You can taste the difference. You’re worth it. Lasts longer. The better connection. Logitech. For you. Also! For real energy. Helping people to…something I can’t read. Yes! 25% off. Faster than fast. Say yes. Made for the now generation. For the energy you need. With extra zinc. Smoother than smooth. More. Get it. For the new you. Because you know. Mellowed in wood. Twice distilled. Twice the taste. The taste you’ll remember. 50% more.

And then, next to some wire, a cartridge from a police shotgun. Probably fired only the day before.

What’s that? 2 bore? I know little about munitions. I’ve only heard of 12 bore, and am unclear what a “bore” is. I assume it’s not a person who goes on about how their holiday in Bali was SO much better than Mauritius, and how the “new drop and go system at the school is a disaster, don’t you think?”

My terms of reference probably reveal much about why all this happened. Why The Battle of the Somme visited Johannesburg for a long weekend.

A crow eats what I think is half a pie, or possibly another dead crow.

Cars burned for no reason. Or maybe the best reasons imaginable.

I’m scared of being robbed by the figures staring at us as we clean up. But more scared that someone will take a picture of us cleaning up and post it on social media, robbing this pathetic effort of any miniscule meaning. Fears that turn out to be very well founded. Social media is the founding father of our nothingness.

Smashed windows. A shop emptied of goods, its shelves dragged into the road. In his book Anarchy, State and Utopia, Robert Nozich said that the idea of “the state” was a protection racket — persuading people to give up rights in exchange for protection of property. If so, our city seems to be run by a remarkably ineffectual protection racket. The brown stain on that mattress — which looks like blood — seems to support this view.

People who have nothing, have absolutely nothing to lose  —  is a system that leaves someone with so little worth supporting in any way?

Philosopher John Rawls, in A Theory of Justice, writes: “A just society is a society that (if one knew everything about it) you would be prepared to enter in a random position.” Rawls’s argument (much referenced in The West Wing) is that if one wouldn’t be prepared to take the chance of being allocated a place at the bottom of a society, it is an unjust society.

I was driven here by my left-wing beliefs — and also by the lovely Uber Van driver, Muta.

They droop when faced with this willful destruction; perhaps predicated on a belief that people are basically good. The burning down of a primary school in a low-income area does place this idea under a certain amount of strain.

Anger is, like all emotions, a response shaped by evolution over oceans of time to serve a specific purpose.

It is strangely unstudied too. Presumably it’s more lucrative and fashionable to examine blessings such as depression, anxiety, PTSD, autism and… er …everything else.

When the world around us isn’t as we would like it to be, surges of noradrenaline and cortisol enter the bloodstream — aimed not at a specific organ or synaptic gap, but flooding the entire body and priming it for decisive action against the threat — probably a fellow caveman (armed with an axe) who is about to steal our children or hair care products.

Action. Often violent action. That is what anger is designed to do. It pushes us to shout, hit, hurt and to drive away the caveman or lion and to protect our children or hair care products.

But what if things are more complex than that? What if the thing or person who made the world “not as we would like” is someone against whom we cannot take action, or is a blank, faceless economic situation.

The pink stuffed-toy unicorn lying on the pavement (burned, missing a leg, sequins ripped off, surrounded by broken glass) is a clue.

When anger demands action, shrieking for violence  —  we take it. Almost always against someone other than the person or thing who hurt us. Because they aren’t there. But action is taken nevertheless. The shouting, hitting and hurting must happen. Bloody Darwin. Red in tooth and claw. Evolution demands it. Which is a shame for the child, spouse, employee or the pink stuffed-toy unicorn who is on the receiving end of it. The sins of other, scattered, faithless fathers heaped upon them, sometimes costing them a leg or tearing off the sequins.

After several hours of cleaning, the rubber glove my son is wearing to pick up debris rips. Given that this probably means a 50 to 70% chance of contracting Hepatitis, we change it.

It’s easy to panic at this destruction. That tyrannical lizard, the Amygdala demands it.

The Victorian building to my left, less so.

Largely obscured by the ugly wall of a used car dealership, this building is not prone to panic. It saw the riots by the Uitlanders prior to the Boer War. The murderous uprising of white socialist workers in the 1920s. Protests by black South Africans against apartheid. It is noticeably calmer than me.

But even it is not as unmoved as the unusually shaped rocky outcrop ahead of me to the west. It saw all of these things, as well as the  brutal conflicts between the Tswana and San. The Ndebele and Tswana. Settlers and Ndebele or Zulu or Griquas.

The cold, clear blue highveld sky has seen even more. Things of which we have no knowledge.

Other people have joined our group. One man has brought a small bulldozer. A company seems to have provided a truck. Work speeds up as a result.

Thankfully no selfies are taken. One is attempted, but the drunk lying under a tarpaulin in the background makes it sub-optimal for sharing on social media.

Why are we here? I know that after the London riots, nothing was cleaned up for weeks. Are we just more used to events like these? Or (given the high-stakes here in Africa) are we more invested somehow? Are we doing it to make ourselves feel better?