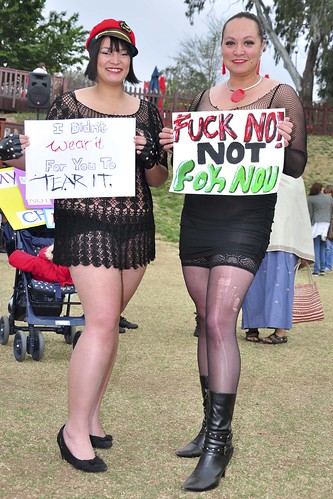 I’m terrible. I make blonde jokes. I pass bitchy remarks about other women behind their backs. I make fun of myself and my female failings. I refer to “chickies” and “bokkies” and bunnyboilers are one of my favourite topics of discussion. Technically, I can be a terrible misogynist, though my baleful attitude applies equally to all human beings. I’ll be honest though: if there’s a sisterhood, I’m a very bad member of it.

And yet at the same time I consider myself a feminist. Not a very good one, perhaps; I’m probably a feminist in much the same way I’m an Anglican, involving lots of warm and fuzzy residual associations without ever actually kneeling at a pew. But a feminist nonetheless.

How is this possible? Can a feminist really be so politically incorrect? Should I be able to use the codes of stereotyping and marginalisation and tell myself I’m playing with discourse — that I’m being ironic, and that makes it OK? I know only too well that some of the worst misogynists out there are women, and that by playing with stereotypes, I do come dangerously close to reinforcing them rather than deconstructing them.

The personal is political, as the old slogan went, so here’s some history to contextualise my stance. I was a feminist before I’d even heard of the word. At the age of six, I knew I didn’t want to be like me mother, and be a housewife; I knew then that I wanted a career, that I was cleverer than most boys, and I didn’t want a husband. As a child, I completely refused to toe the line on gender stereotypes, lovingly caressing my First Love doll, dressing in pink frills — I had dreadful taste when I was eight, utterly dreadful — and at the same time being utterly obsessed with military jets and helicopters. That I ended up married at the age of 26 was a surprise to everyone who knew me. “But I thought you liked lesbians?” my mother said when I made the announcement. She didn’t mean I was a lesbian, just that my student political activism, campaigning for gay rights, had led her to assume that settling down in a normal heterosexual way was not on the cards.

There is no such thing as feminism of course, at least, not in the sense of a homogenous catch-all -ism; feminism comes in all varieties, and there are many different ways of expressing the core conviction that gender impacts on the way we operate in the world, and how the world operates on us.

Participating in SlutWalk Johannesburg on September 24 certainly forced me to think again about different versions of feminism and my relationships with them. I rocked up at Zoo Lake expecting a combination of PC worthiness and hardcore dyke attitude, and that’s how things started out, with terrifying flashbacks to my master’s year at Wits. But then speaker after speaker stood up to claim the word “slut”, to reject the boxes that society manufactures for women, to take an epithet and turn it neatly on its head. The core message was this: that women should have the freedom to express themselves as they wish without having to conform to some kind of societal expectation. Wear what you like, do as you choose (within reason), have as much sex as you like (or as little) without being called names or being subjected to male violence. Feminism is often stereotyped as an –ism with absolutely no sense of humour (not always unfairly, it has to be said), but the laughter, the playfulness and the good-humoured sense of community of SlutWalk Johannesburg turned a protest march into a celebration of what we hope to achieve as a society.

Still, let’s be clear: SlutWalk was great fun, but it was focused on consciousness-raising around a very serious crime. In most cases in South Africa, women are the victims of male aggression and entrenched cultural and social systems that ensure they are powerless on multiple levels. A poor, black, illiterate woman, especially a poor, black, illiterate, old woman, is one of the most profoundly powerless people in a country of many people who feel profoundly powerless. To pretend otherwise is to reinforce the oppression of those who most need access to a more equitable order.

At the same time, I can’t stand it when people who aren’t victims take on the mantle of victimhood, and that applies as much to women as it does to anyone else. Men are just as tightly chained inside boxes as women; it’s just that the boxes are different. It’s still far easier for a woman to opt out of full-time work, for one thing, and, for all the maintenance-ducking deadbeat dads out there, divorced men and unmarried fathers are still treated unfairly. Then there’s the system — intended to promote the interests of genuinely abused women — which can be abused in turn by women motivated by little more than petty vindictiveness, as this story in Noseweek explains. As the magazine’s editor commented, “in the process they are trivialising domestic violence and, ultimately, undermining public confidence in a law that was enacted to deal with a really terrifying and all too pervasive social problem”.

Feminism, for me, should be about another F-word: fairness. We have a long way to go before we achieve it, if we ever do, but that should be the point. If we want things to be fairer for us as women, then they have to be fairer for men too. Part of this means acknowledging that we can be just as complex and flawed as men; none of this Madonna/whore Victorian nonsense. When individuals behave badly, they should deal with the consequences as individuals, not as representatives of their gender (or race, or religion, or sexual orientation, or what have you).

The point of feminism, at least the version of it that I subscribe to, is that while it seeks to address the injustices meted out to women in a world where — as we sometimes forget — female genital mutilation, honour killings and female infanticide are still rife, there is an end goal in mind: where everyone, regardless of gender, sexual orientation, age, religion or any other proclivity, is able to live their lives as they choose, without impinging on the rights of others. If you’re a salaryman and you want to be an indigent bum, so be it. If you want to do the traditional housewife thing, that’s fine, and it’s also fine to don corporate battlegear every day if that floats your boat.

And if you want to tell blonde jokes, talk about bokkies, and generally be otherwise in every which way — you can do that and still call yourself a feminist.

Remembering Tutu: To forgive is not to forget, and memory can heal

As we bid farewell to the older generation that brought us political freedoms, we must never forget where we come from as a society

Reconnecting with our interstellar family