We assume that First World countries introduced social media tools, such as blogging and digital storytelling, to Africa. In his speech “From rock paintings to mental acrobatics”, Ndesanjo Macha kicked off the 2007 Digital Citizen Indaba in Grahamstown on Sunday saying that Africa already had social media before the emergence of the digital age. Africa has a strong tradition of collective storytelling, of taking thoughts and ideas and putting them in a public space. In prehistoric times, Africans used rock paintings to bring their thoughts into the public space. In essence, rock painters were the bloggers of their time; rocks were their blogs. 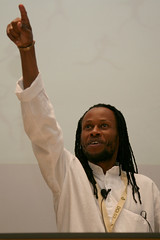 Africa is making great strides in online social media through predominantly mobile technology. Macha said that social media and blogs are specifically relevant to Africa, comparing so-called “Western” online social media with age-old African concepts. Wikipedia, for example, is an online encyclopedia that anyone can edit. It is a collaborative tool to create and share knowledge, which is not a new idea to Africans. Sites like Free Culture allow people to own the means and processes of production. Macha says this concept is linked closely to the African belief of “ubuntu”, meaning “I am, because you are”.

Macha highlighted issues that will be dealt throughout the DCI, including the creation and expression of our individual and collective African identies. For Africa, Macha emphasises the potential of social media to build communities. For Africa truly to take advantage of social media, specifically the blogosphere, Macha says “as the collective [Africans] are more”. Just as rock painters used the tools they had available to them to share their thoughts and ideas with their communities, so Africans can use the tools of the digital age — that is, blogging — to share their stories with the globe.

People have an innate need and desire to communicate. Be part of the great conversation and join us as we discuss issues around blogging, social networking and cyber identity raised at the second Digital... More by Digital Citizen Indaba