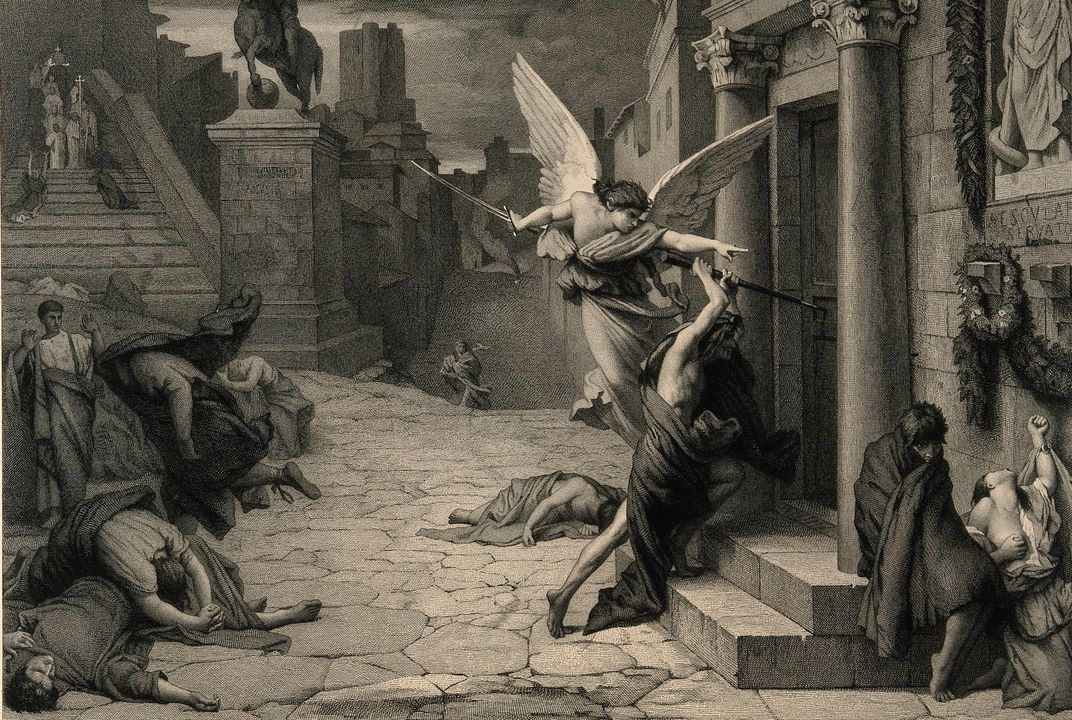 A pandemic is not a new phenomenon in human history. In history classes and usual conversation, there are utterances of pandemics such as the bubonic plague of the Middle Ages and the Spanish flu of 1918. Pandemics continue to occur in cycles, and the patterns of human behaviour seem to be familiar in each case. If we look to ancient accounts of pandemics from Ancient Greece and Rome, we can identify a number of similarities and differences, which further supports the argument of the necessity to learn from history.

One of the first recorded pandemics in antiquity was written both by ancient historians Livy and Thucydides. The two historians provided an interesting parallel of a plague that occurred in approximately 430BC in both Rome and Greece, which, perhaps, indicates a transfer of the plague over large geographical areas. While there is an ongoing debate over the type of disease that it was, Livy described it as extremely infectious, for it affected livestock too.

Thucydides describes the plague in more detail than Livy. This may be because of the ongoing Peloponnesian War that occurred at the same time. He believed the plague originated from Ethiopia and was initially untreatable since the doctors were ignorant of such a disease, and the doctors themselves died in numbers from the illness. This is similar to the death rate caused by Covid-19 , where doctors have had a high mortality rate too.

Moreover, Truter’s highlights of Thucydides’s account of the 430BC plague reveal a dire, depressing time in Athens. Cadavers and human remains were reportedly left unburied due to the ever-increasing death rate. He makes mention of the differing behaviours of Athenians at the time where you were either remaining in self-isolation, visiting friends and risking your health, or attempting to recover from the illness. These behaviours, of course, have been occurring during our current pandemic.

An intriguing point of analysis is critiquing the attitudes of leaders whose tenures were during the time of a pandemic. Thucydides refers to the Athenian leader, Pericles, who prioritised bolstering the military and preparing for war over addressing the ill-looking “elephant in the room”. In fact, Pericles remains indignant and fails to take responsibility for the lack of action towards curbing the plague. A modern comparison to this would be outgoing American President Donald Trump, who has downplayed the Covid-19 virus for months and expressed that the increasing infection rate is “fake news”.

Despite Livy’s lack of detail regarding the 430BC plague in Rome, the city faced numerous cases of disease throughout its Republican and Imperial Ages. The Antonine plague was recorded by the ancient physician Galen and has been argued to have been instrumental in the decline of Imperial Rome. The extent of the plague’s effects on Rome is not well noted by Galen, since his focus was a search for symptoms and cures, rather than reporting on its history.

Ancient writings on diseases, however, may provide an idea of what Romans did during a pandemic such as the Antonine plague. Wood explains that wealthy Romans understood the link between infection rate, temperature and population density, which is why senators had estates in the country and access to public baths. Unfortunately, healthcare was expensive in Rome, hence, the majority of Romans relied on home remedies. Unfortunately, in 2020, only 32 countries have forms of universal healthcare, which also leaves lower classes at ransom to low or non-existent quality healthcare in various countries.

The ancient historian Cassius Dio was alive during the Antonine plague and lived through its atrocious attack on the people of Rome. Dio approved of Emperor Marcus Aurelius’s attempts to prevent the spread of the plague while finding solutions to the social and economic effects of the pandemic. Nevertheless, the plague reached its deadly climax when it supposedly claimed 2 000 lives per day.

Consequently, the effects of these ancient and modern plagues reveal startling similarities. Due to the high death rate caused by the Antonine plague, cities were underpopulated and faced the risk of economic turmoil. In 1918, the Spanish flu took the lives of millions of working citizens, leaving a lack of labour and economic stimuli.

In terms of Covid-19, while we are still experiencing the pandemic, the socioeconomic effect is being felt globally. To illustrate this, one simply needs to read a South African government report to the United Nations to identify the increase of unemployment and inequality as a result of the pandemic.

Although our modern society has advanced in medicine, technology and science far beyond the available resources and discourse in antiquity, there is a common thread of human behaviour and mindsets from the ancient and modern worlds that have ultimately influenced the spread of diseases. It is through interdisciplinary studies and analyses that we may uncover lessons from the past, and seek to avoid repeating the same mistakes that are a result of our defiant human nature.