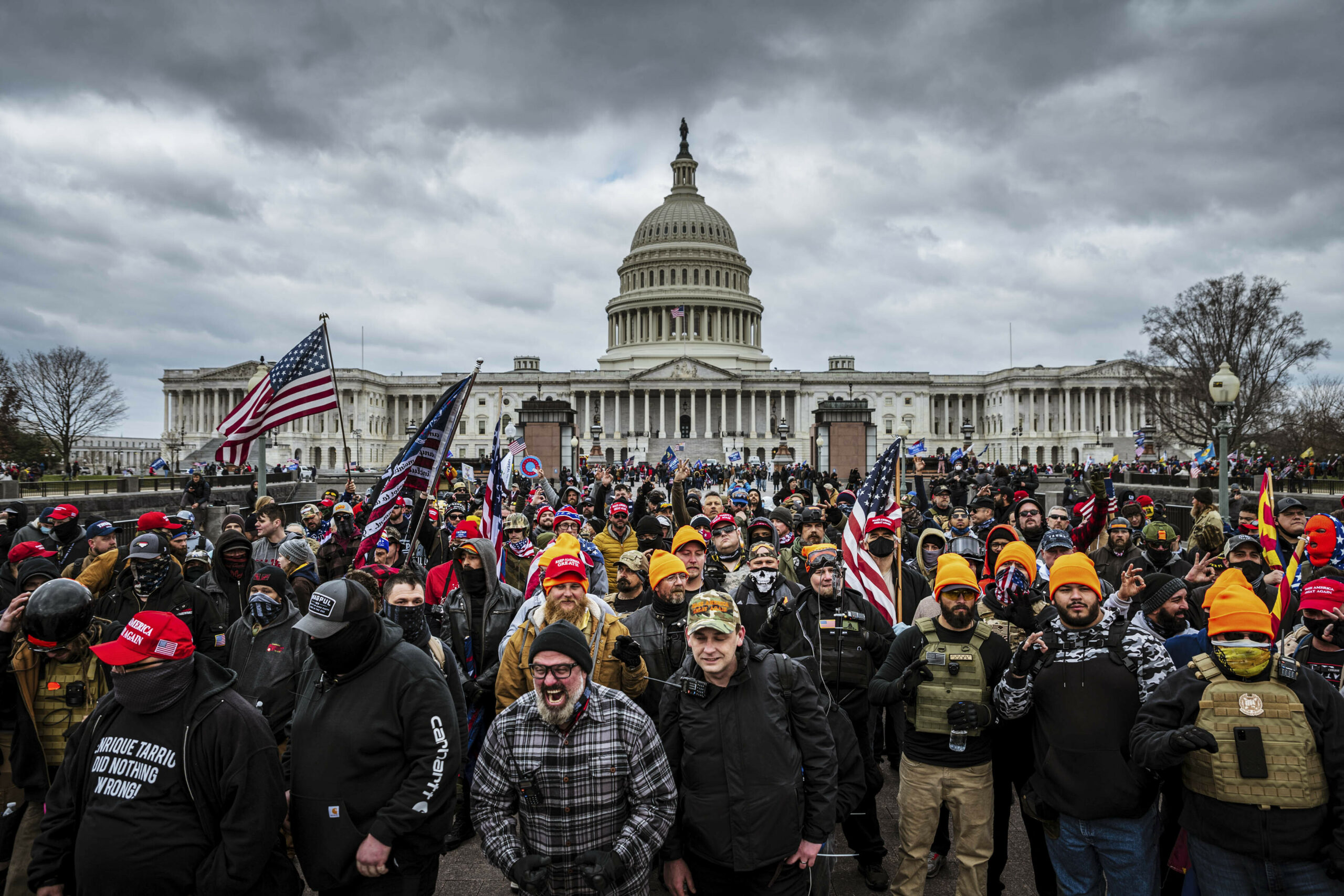 People in the United States and around the world watched the final attempt by Donald Trump to hang on to power with shock, consternation and bewilderment.  It was a spectacle that the US had not witnessed since British soldiers burned the Capitol after invading Washington in 1814.

The drama unfolded when Congress was preparing to certify the election of Joe Biden as president. Piqued by the loss in the 2020 elections, Trump held a rally with his supporters near the White House and shortly thereafter a mob stormed the Capitol building.

The developments are the subject of analysis of the US’s past, present and future from Beijing to London, Canberra to Moscow. And what are the lessons for Africa?

Five people died in the attack on the Capitol. Compare this number to the hundreds who die in similar situations in Africa. Wednesday’s chaos in the US is nothing like the prolonged post-election contestations that we have witnessed in Africa. Yet the polarisation in America’s politics over the past decades created fertile ground for the emergence of circumstances conducive to post-electoral contestations, particularly with the election of Trump in 2016.

Trump’s refusal to concede defeat in the 2020 elections led to the sad events that reached a climax on 6 January. His belated concession on 7 January has been rightly labelled as too little too late.

The chaos in Congress made the US begin to resemble the African countries it has preached to regarding the need to respect free and fair elections. There are no exact comparisons between the disruption of Biden’s transition to the presidency and disrupted elections in Africa. Contexts, nuances and particularities differ. Because of the institutional weaknesses in African countries, Africans are much more familiar with post-election problems than their American counterparts. Violent confrontations have taken place in countries such as Burkina Faso, Gabon and Kenya.

In attempting to cling to power, Trump behaved like African leaders such as Omar Hassan Ahmad al-Bashir of Sudan, Robert Mugabe of Zimbabwe and Yahya Jammeh of The Gambia. Ensconced in near absolute power, they were oblivious to reality and failed to recognise the shifts in power. In 2016, Mugabe faced his Waterloo as hitherto loyal veterans of the liberation movement abandoned him. Yet, even with the writing on the wall, he remained adamant, ordering attacks on civilians protesting a failing economic situation. Dismissive of the gathering clouds, Mugabe dismissed his then deputy, Emmerson Mnangagwa, forcing a military takeover in 2017. Similarly, al-Bashir defied a popular uprising in 2018, counting on the military to back him, but it ultimately ousted him in April 2019. The Gambia’s Jammeh had to be whisked out of his country into exile in Equatorial Guinea where he is still cooling heels.

But this playbook could not work in the US, where elections are credible and there is clarity on institutional rotations of power. In Trump’s case, his loyal deputy, Mike Pence, refused to prevent the certification of Biden as the winner of the 2020 presidential election. He does not have the authority to overthrow the Constitution to satisfy Trump’s desire for a stolen second term.

One of his supporters, Senate majority leader Mitch McConnell, broke ranks, indicting Trump from the floor of the Senate moments before the Trump mobs stormed the Capitol.

“The voters, the courts and the states have all spoken. They’ve all spoken. If we overrule them it would damage our republic forever,” he said on Wednesday. “If this election were overturned by mere allegations from the losing side, our democracy would enter a death spiral. We’d never see the whole nation accept an election again.”

The number of Republican senators willing to support Trump’s cause in the Senate dwindled to just 14 — a number that later dropped to seven after the fiasco. In addition, some of Trump’s major supporters such as senator Lindsey Graham of South Carolina distanced himself from Trump. It is these major reversals that facilitated the smooth certification process and Trump’s long-delayed electoral concessions in the early hours of January 7.

A major casualty of the contested transition is the US’s record in democracy promotion around the globe.  Past American administrations, Republican and Democratic, have invested resources in the promotion of ideals to cultivate democracy and human rights. But with the Capitol disturbances this week, that quintessential American mission to the world and to Africa started to sound a bit incongruous. These events dramatised Trump’s disdain for democracy at home and abroad.

For the most part, America’s democracy promotion abroad hinged on the sturdiness and solidity of its domestic institutions that the rest of the world could emulate. As the world watched the chaos in Washington this week, most of the leading democracies in Europe and elsewhere pleaded for a smooth transition because of the understanding that the failure of the democratic project in the US would deal a severe blow to democratisation globally. Now that Washington has overcome the dark days of Trump’s presidency, it may need to be more circumspect, less preachy and more appreciative of the difficulties of building democracy on the basis of profound socioeconomic and other cleavages.

For autocratic regimes in Africa, the successful seizure of the Capitol by a mob would have vindicated the argument for “strong states” that do not countenance competitive voices and ideas. As he prepares to rig the January 2021 elections in Uganda, President Yoweri Museveni would have been happy to see chaos in the US because it would justify his constant harassment of opposition parties in the name of law and order, a Trumpian trope.  Most of the major presidential elections in Africa in 2021 will be in countries such as Chad, the Republic of Congo, The Gambia and South Sudan; countries where authoritarian regimes have long clung to power and would be emboldened by democratic reversals and retrenchment in the US.

The bigger lesson for Africa from the recent US  events, however, should be that democracies are fragile and potentially reversible because they depend not just on institutions and rules, but also on the men and women of goodwill who respect these institutions and are able to be constrained by them. It is an instructive lesson; the ethos of democracy as a dynamic project, always work in progress rather than a done deal. The priority in Africa, as former US president Barack Obama argued in the Ghana’s parliament in 2009 and repeated during his high-level speeches in Addis Ababa in 2015, should be on strong institutions rather than on strong men. After Trump became president, Obama delivered a scathing, if circuitous critique of Trump during the Mandela centennial celebrations in South Africa in 2018 in which he underlined the sacrosanctity of rules regardless of personalities in leadership. During the debates on the House and Senate floors in the certification hearings, a lot was made of how institutions had restrained strong men until the election of Trump. It was probably apt, therefore, that his one short term should have ended on the ignominious note of anarchy and mayhem at the citadel of American democracy.

Biden has shown an even-keeled temperament during and after the November 2 elections. But the unseemly circumstance he has endured over the past two months beg the question: how long should it take for power to be transferred from a loser or retiring president to a winner in the US?

Trump, having finally conceded, signals the fast-tracking of the transition process to the inauguration of Biden as the 46th president of the US on Wednesday 20 January. Expectations on the African continent have been high about a Biden-Kamala Harris administration, given the low-level African agenda witnessed during the Trump-Pence era. African would do well to temper such optimism with caution with the hindsight of the events not just of this week but of the past four years. Although the US will not suddenly abandon its global leadership over the next four years, it is realistic to say that most of the energies will be devoted to the domestic front. African solutions for African problems.