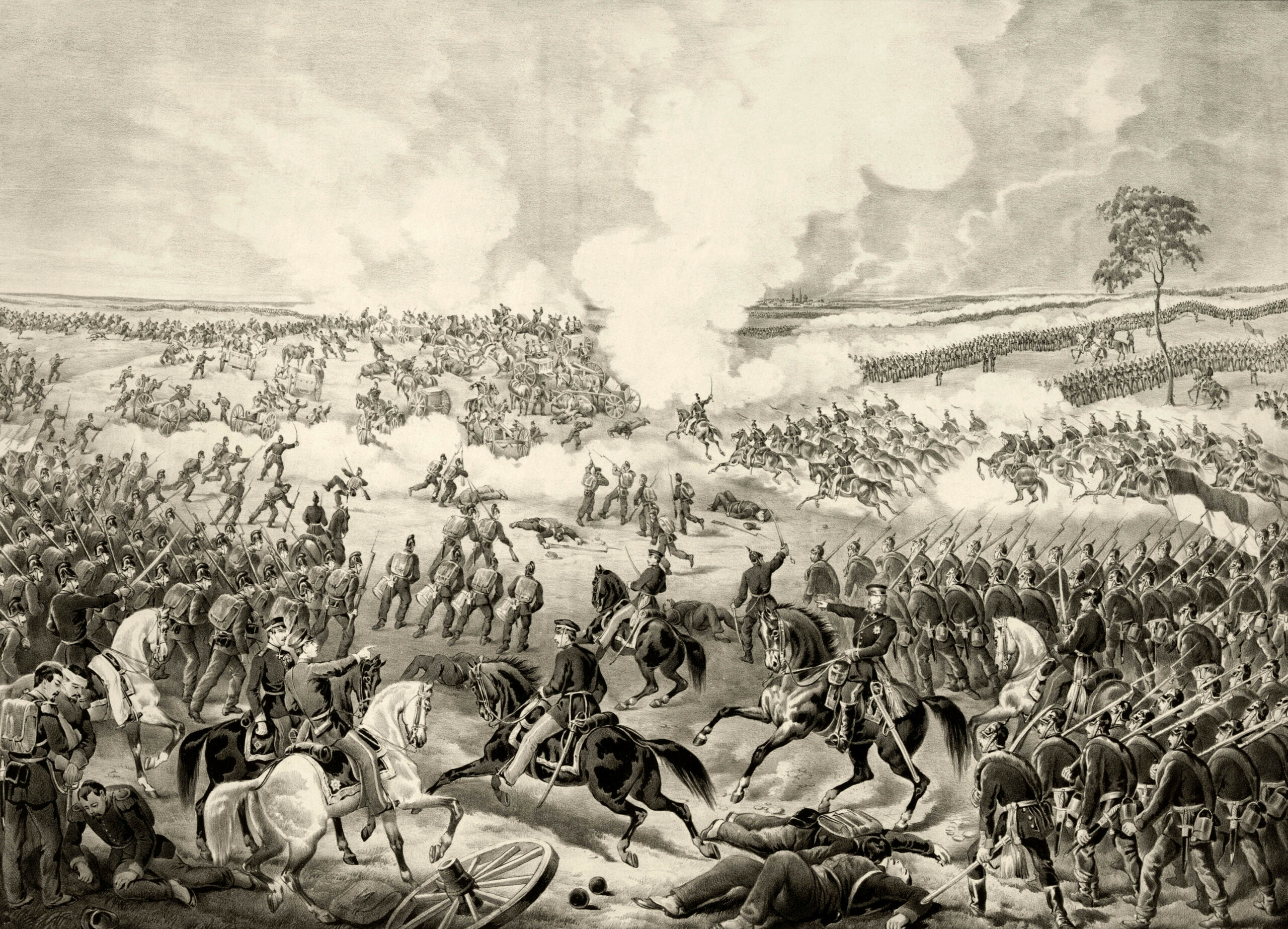 AI and Africa: Threats and opportunities

The 18th of January this year marked an important milestone for Germany. It was 150 years ago that the country finally attained unification under the leadership of the Kingdom of Prussia. The unification was attained following the Franco-Prussian War of 1870 and 1871.

The war was a resounding Prussian victory and, adding insult to injury, it was in the Hall of Mirrors in Versailles that the new German Emperor was crowned, and not in Berlin. The war served as a unifying moment for the larger Prussian state (whose king and descendants would wear the crown of the emerging Empire of Germany) and the smaller German-speaking kingdoms and principalities in the south. Following the victory, many of these smaller states resigned themselves to the inevitable prospect of Prussian annexation, others took more convincing and coercion. Few, notably the Empire of Austria (nurturing its polyglot empire to the east of Europe), were excluded. As a result, contemporary Germany resembles what is referred to as “Kleindeutschland”, or little Germany, as it fell short of the grand goal of unifying all German-speaking peoples in central and western Europe in a “Grossdeutschland” (greater Germany).

The war with France had itself been the result of a tussle over language. It was set off by the now infamous Ems Telegram. The King of Prussia sent the minutes of his meeting with the ambassador of the Emperor of the Second French Empire, Napoleon III, through the recently introduced technology of electronic telegraphy (commonly termed the telegram) to his Chief Minister Otto von Bismarck. It contained a poorly translated phrase that Napoleon would perceive as a slight and a cause for rapid French mobilisation against Prussia.

In short, the telegram contained the unfavourable response to one of Napoleon III’s demands for the reorganisation of power in Europe. The king also said his communications would now be directed to the French ambassador’s “adjutant”. The telegram was subsequently leaked to the press by Bismarck, who strategically deleted a number of passages in order to portray the incident as insulting to the French.

In French, “adjutant” translated to a junior non-commissioned officer rather than a high-ranking secretary as intended in German. It was as if the French ambassador, and therefore the French monarch and nation, had been intentionally mistreated and not accorded proper protocol. It was this last part of the telegram which set France on a warpath within two days of the news reaching Paris.

The subsequent war has been analysed from a multiplicity of perspectives. For some historians, the then new technology heightened the pace of human communication so much that occasional misunderstanding was bound to take place. For others it removed human touch in diplomacy and made statesmen prisoners of events.

And still for some, it was the machinations of the brilliant but admittedly devious statesmanship of Bismarck (who saw war as an opportunity to humiliate the French, gain territorial concessions and unify the smaller states under Prussia) and the gullibility and foolhardiness of Napoleon III (eager to live up to the military exploits of his more illustrious uncle, Napoleon I) that set the two countries on a collision course.

Whatever the case may be, this episode shows that language is always political and that new technologies (as the telegraph was in the 1870s) play a catalytic role in how we communicate and miscommunicate. Presiding over a newly united and powerful German Empire, Bismarck hosted the infamous Berlin Conference in 1884 and 1885 which, ironically, carved up the African continent with little regard for social and linguistic dynamics on the ground.

The significance of language was quickly recognised by some leaders following independence. Such recognition has been institutionalised into the African Union (AU), and the Organisation of African Unity (OAU) before it. The importance of language, and by extension culture, was recognised early on by the nation-builders on the continent.

In Tanzania, this was evident in Julius Nyerere’s policy of Swahili as a national language (as well as in his translations of Shakespeare into the same language). In Senegal, it is evident in Léopold Senghor and his contributions to the philosophy of Négritude. Also a poet, his works have been translated into his native language of Serer for the first time in recent years. Zambia’s Kenneth Kaunda’s African humanism harnessed ethics to forge a nation of human rights and dignity, while Milton Obote, as expressed through his 1969 pamphlet Common Man’s Charter, sought to entrench a cultural transformation by ridding Uganda of tribalism.

These leaders, and many more across the continent, recognised the potentially constructive role of language. How much they all succeeded in the policies they sought to enact is up for debate, but their premise is a correct one. Indeed, by contrast, when Emperor Haile Selassie of Ethiopia disregarded the political, cultural and linguistic autonomy of Eritrea by making it a province in 1962 (thus breaking the provisions of the unification as set out by the United Nations in 1950 via UN Resolution 390(A)), he intensified secessionist sentiment in Eritrea and set his country on a path to civil war that culminated in Eritrean independence in 1993.

Today, the role of language as a bridge-building facility has been recognised by China, through its Confucius Institutes, and by Germany through the Goethe Institutes. Both these countries have hundreds of such language and cultural dissemination sites set up across the world, including in dozens of African countries.

The continent’s guiding framework is Agenda 2063, which gives due recognition to the role of language and culture (Aspiration 5 of the document envisions “An Africa with a strong cultural identity, common heritage, shared values and ethics”). Having been conceived in the early 2010s and published in 2013, the plan operates in a world that has since rapidly changed. One of these areas of change is the emergence of the fourth industrial revolution (4IR).

This entails changes in the world of work, as well as in the social and cultural spheres as powerful new technologies such as artificial intelligence, the internet of things and blockchain enter industrial and widespread usage. This requires some shifts in social institutions, especially in the promotion of lifelong education and computational thinking in our schools.

Elsewhere we have also noted the opportunities presented for African languages by AI. The first of these is in the area of language preservation, of those languages which are under threat of going extinct. We have also seen the publication of apps which utilise AI to translate prominent as well as less known African languages. One such app is OBTranslate, based in Nigeria, which has a library of 2 000 African languages. Another is Reah the South African Sign Language (SASL) translation tool available in Android and slated for publication on Apple devices.

To be sure, the continent has made strides in both culture and technology. Synthesis and a comprehensive approach are required, however. The AU’s Centre for Linguistic and Historical Studies by Oral Tradition can adopt such a role. It has already taken major steps to take advantage of the possibilities presented by technologies for its mandate, including digitisation of oral histories.

The AU has declared the theme for 2021 to be “Arts, Culture And Heritage: Levers for Building the Africa We Want.” This presents an opportunity to explore and consolidate the role of 4IR technologies not only in the safeguarding of existing arts, the creation of new ones, but also the recovery and repatriation of those wrongfully taken during the colonial era. On all fronts, blockchain offers promise given its applications in asset management.

One major issue on language and AI is bias. For the AU, this requires not only advocating for bias-eliminating global standards in AI, but also fairer language practices within the continent itself. Currently, two countries are mired in ethno-linguistic conflicts. In Cameroon, there is a civil conflict between the Francophone-dominated government and the disaffected Anglophone minority population (roughly 20%) after decades of language-based oppression.

In Ethiopia, the ethnic-based federal system has resulted in a war between the federal government and the Tigray-speaking region in the north of the country. It has also been observed that even among the stabler democracies, governments tend to favour certain ethnicities over others due to their voting relevance. This is perhaps to be expected, as in most African countries an average of 70% of the same language-speakers tend to be in contiguous territory.

Such has been the case in Kenya, where voting preferences are strongly correlated with language and ethnicity. This makes the diverse capitals places of intense post-election violence. A coherent language policy for 4IR can only follow from social cohesion and democracy.

The recently late Christof Heyns, a renowned professor of law at the University of Pretoria and a giant in the human rights world, has brilliantly written about Africa’s philosophical and ethical contribution to the dilemma of drone warfare vis-à-vis human rights in 2016. The ethical underpinning of many African cultures — ubuntu — demands that even when we reach a state of maximum predictive efficiency for AI-powered drones, human oversight over life and death decisions should not be relinquished to machines.

As he put it: “The current turn to algorithms may in some respects be a step forward but it also presents the risk of a return to the anonymous exercise of power which does not have to meet the requirements of justification and accountability.”

This is one of many powerful ways Africa can contribute to the era of AI.