Advertising: a tax on unremarkable products

The best way to sell something is to have your customers do it for you. People trust each other much more than they do the corporate message or your best advertising slick, and brands around the world have shown the value of using this to their advantage.

A study by McKinsey found that 67% of all consumer decisions are primarily influenced by word of mouth. It’s our family, friends and fellow employees that influence us the most — and in that order.

One of my favorite business quotes is by Robert Stephens, founder of the Geek Squad, who stated, “Advertising is a tax for having an unremarkable product.” Painful, not entirely accurate, but the essence is true. Everyone has some type of marketing and advertising budget — it’s the size of that budget weighed against effectiveness when compared with competitors that proves it out.

Take a look at the following brands. They do a remarkable job of facilitating conversations about their products or company with smaller budgets than their competitors. They don’t need to do nearly as much because everything they do gets magnified by the voices of all their passionate customers (or those that want to be). 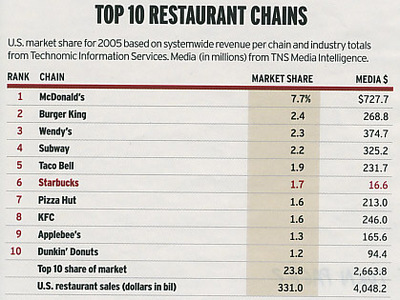 Starbucks — they spend substantially less money on advertising than any other top 10 restaurant in the United States.
Mini Cooper — what small car do you hear people talking about more?
Apple — if they had to pay for all of the free publicity, blogging and conversations that happen over their every move, they would be bankrupt in a week.

It’s no secret that good products sell better than bad. Why don’t we see more companies reallocating some of their marketing budget to improving the product or experience?

Published in Business and Media