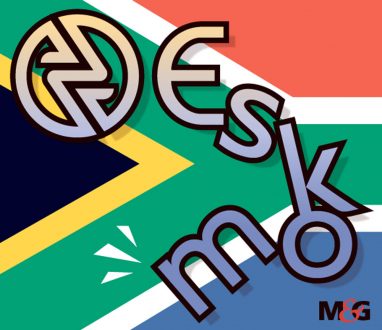 The prospect of living in a ‘world without electricity’ in South Africa has become a spectre that looms ever-larger by the day, as a mismanaged, looted-to-the-bone Eskom struggles to keep the ‘lights on’ — a misleading metaphor, insofar as it stands for the entire electricity-based economy of this country. In the era of fake news not everything that circulates via apps like Whatsapp is believable, so I tend to take with a pinch of salt the circulated rumours that Eskom is planning for stages 5 and 6 of load-shedding, because previously we had been informed that stage 4 is the last line of defence between intermittent electricity and a collapse of the electricity grid.

Needless to stress, if the grid were to collapse — and apparently it would take a long time to get it up and running again — this would herald the possible return to a form of barbarism in this country. You have probably heard the saying, that the difference between people acting in a civilised and an uncivilised manner amounts to going without three meals. Well, if the grid were to go down, this would add up to more than those three meals, if you ask me. How did we get to such a sorry pass in this beautiful country of ours?

It goes without saying that this state of affairs is inseparable from the mismanagement, not only of Eskom and other so-called state-owned enterprises, but of the country’s affairs under the ANC government, particularly when Jacob Zuma and his cronies were in the position to rob state coffers as much as they could. It is no exaggeration to say that the ANC has brought South Africa to the brink of bankruptcy: economically, politically and ethically. If voters are stupid enough to vote for them in the imminent election — or worse, for the Economic Freedom Fighters — they will only have themselves to blame for the disastrous consequences that will inevitably follow. People get the governments they deserve.

Five years ago, I wrote a piece on Thoughtleader that dealt with the disturbing, yet gripping, novel by ex-South African novelist, Eben Venter (now living in Australia), called Horrelpoot (available in translation as Clubfoot), and elaborated on the intriguing question concerning fiction and its relation to the historical future. The question was, and still is, intriguing for obvious reasons – although the novel is fiction, it fictionalises on a really existing country’s future, namely, South Africa’s.

If you re-read my previous piece on it – linked above – you will understand why one tends to approach the novel comparatively in terms of the fictional events depicted by Venter and the country’s actual, possible – if not probable – future, particularly because it has just become more relevant: the collapse of Eskom constitutes a key factor in the fictional deterioration, and eventual degeneration of South Africa into chaos in Venter’s narrative.

It is no accident that Venter cleverly models his narrative structurally on the main stages and characters in Joseph Conrad’s novella, Heart of Darkness, which similarly deals with a descent into darkness, as it were, involving the clash between two putatively irreconcilable cultural mindsets – the western and the African, with the western arguably coming off worse in ethical terms. Such a staging was repeated in a wider (in fact, by implication global) fictional (but also historical) arena by Francis Ford Coppola in his devastating Vietnam War film, Apocalypse Now (also modelled on Conrad’s novella), where the western and the Asian are brought into violent confrontation, with a similar outcome.

The reason why I allude to these diverse, but similar treatments of the fraught relationship(s) between different cultures is because this may be what is at the bottom of the current uncertainties faced by South Africa’s ‘rainbow nation’ (particularly regarding the possibility that we face a world without electricity here) — a metaphor that graphically captures the cultural, ethnic, religious and gender diversity of this once-promising country. I deliberately did not include ‘racial’ diversity, because despite the (destructive) hype around ‘race’ in South Africa, this is not, in the final analysis, what is decisive. It is not the colour of one’s skin that makes you what you are and do as a person, but your cultural upbringing, and the culture with which you identify, in the end. Bring a ‘black’ child up in a culturally western home, and chances are she or he would identify with a western outlook on life, and vice versa.

I don’t make this claim lightly. In the 1980s a debate was conducted in the pages of the American journal, Critical Inquiry, on the question, which category is more fundamental – ‘race’ or ‘culture’. The consensus of opinion, finally, was that ‘culture’ was not only more fundamental, and useful, as an analytical concept, but that ‘race’ was pretty useless for analytical or interpretive purposes. Hence, when people talk about different ‘races’, that word simply functions as a metaphor (or metonymy, perhaps) for the complex cultural identity of the person or persons concerned.

I hasten to add that this does not mean that one’s cultural identity is a ‘prison’ from which one cannot escape, if you so wish. On the contrary, as I argued more than 8 years ago, the structural dynamics of a person’s subjectivity (or your psyche) allows you to reconfigure your identity markers – therefore one cannot hide behind your cultural identity to evade responsibility for what one has done. Why is this relevant, and what does it have to do with the possibility — and I sincerely hope it is not the probability — of South Africa facing an economic collapse because of the waning of our electricity supply? (It may be argued that there is the option of everyone ‘going off the grid’, of course, but the costs of solar [or generator] energy that is sufficient to supply all one’s domestic needs is such that the vast majority of people cannot even dream of it.)

The reason why I have invoked the issue of cultural identity is germane to this discussion because of the suggestion, by a South African commentator, that there is a fundamental difference between a western and an African identity (as thematised in Conrad’s Heart of Darkness, referred to above), and that this difference accounts for the way things (don’t) get done in this country. I am referring to Prince Mashele of The Sowetan Times/Live, whose piece on South Africa being ‘just another African country’, and nothing exceptional — something that Jacob Zuma’s actions have reminded us of, according to him — was circulating again on Whatsapp recently. This is (part of) what Mashele wrote:

What Zuma has done is to make us come to the realisation that ours is just another African country, not some exceptional country on the southern tip of the African continent…

We must all thank Zuma for revealing our true African character; that the idea of rule of law is not part of who we are, and that constitutionalism is a concept far ahead of us as a people.

How else are we to explain the thousands of people who flock to stadiums to clap hands for a president who has violated their country’s constitution? Such people have no idea of constitutionalism.

Now that we have reclaimed our place as another African country, we must reflect on and come to terms with our real character, and imagine what our future portends…

Before you reject Mashele’s suggestion, remind yourself that, a few years ago, it was widely reported that former president Jacob Zuma called ‘corruption’ a ‘western concept’, that is, one that, by implication, does not apply to African (or other) culture(s). Does that not confirm Mashele’s (irony-laden) claims, by and large (see also this article and this article here). That is, as far as people with unadulterated ‘African’ identities are concerned, of course, given that Mashele himself has confessed to being one of the ‘clever blacks’ (excoriated by Zuma) who have been ‘corrupted by Western education’, like Thabo Mbeki and Nelson Mandela.

The important part of Mashele’s statement quoted above is that South Africans must: ‘imagine what our future portends…’ Recall what I wrote above of the capacity that all people have to ‘reconfigure’ their cultural identities. South Africans are no exception – if people wish to move beyond the kind of African identity that Mashele describes in his column (assuming he is right), it will require that they inscribe certain new identity markers into their reconfigured identity, such as: political accountability, ethical integrity, acceptance of differences and the need to cooperate for the sake of a prosperous and peaceful future, and a pragmatic (instead of narrowly ideological) approach to political and economic decision-making (to mention only some). It can be done, but it would take resolve and perseverance. Otherwise the fictional scenario of Horrelpoot might just be actualised, which is far too horrible to contemplate.