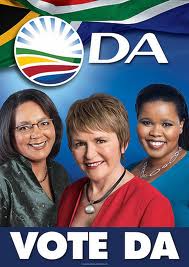 The accidental politician who would be leader of the opposition

By William Saunderson-Meyer on 1 October 2011

When challenged on the absence of black faces in its leadership, the Democratic Alliance loves to boast, that it is “growing its own timber”. In other words, it claims there is no window dressing, only the slow nurturing of future giants.

As it turns out, the DA’s blackwood forest is more hothouse than maturing plantation. The vaulting progress of 31-year-old Lindiwe Mazibuko, who has been a party member for only five years, continues with the announcement that she is challenging Old White Male incumbent Athol Trollip for the post of leader of the opposition.

Mazibuko — who was first elected to Parliament in 2009 and is one of the youngest MPs — is an accidental politician. She crucially caught the eye of Helen Zille, now DA leader and Western Cape premier, when in 2006 she chose Zille as the topic for her Honours thesis.

At the time, Zille was vying with Trollip for the party leadership mantle. Zille defeated Trollip, who a couple of years later extracted faint revenge by defeating Zille’s favoured candidate for the DA’s parliamentary leadership. Zille will have the final laugh if, as seems likely, her protégé in turn topples Trollip.

Mazibuko, in quickfire succession, got a DA research job, was made national media officer, catapulted into Parliament, became national spokesperson and shadow deputy-minister of communications, and recently was appointed shadow minister of rural development and land reform. Lots of titles but not much experience, although Mazibuko must get points for the equanimity with which she has borne the abuse hurled at her for daring to support a “white” party.

In contrast, Trollip is more experienced, comes from the African National Congress’ hinterland of the Eastern Cape, and is fluent in isiXhosa, Afrikaans and English. On the downside, he has been schtum in all three, making little impression in the national political debate.

That may not be his fault. Having a national leader, Zille, who is not in Parliament in effect downgrades the parliamentary leadership role to second fiddle. Factor in that the DA mayor of Cape Town — the only Big Six metropolitan area not in ANC control — is the high profile Patricia De Lille, which means that Trollip is left sawing away manfully in the back section of the strings.

Nor is Parliament the site of power and accountability that it was briefly in the Nelson Mandela years. Although the select committees exhibit flashes of independence, which are as quickly quashed as they flare up, the ANC has lulled Parliament into a somnolent acceptance of an increasingly unaccountable presidential executive.

But the critical issue for the DA, even though the party’s conservative old guard won’t want to hear it, is that it has to visibly reflect at the top the fledgling progress made at electoral level towards breaching racial laagers. Zille, De Lille and Mazibuko could form an informal but powerfully symbolic cross-racial troika. The countervailing risk is that Mazibuko could crumple under the unrelenting pressure of what should be one of the most visible jobs in opposition politics.

Mazibuko has put together a clever electoral slate. She is backed by lefty former academic, Wilmot James, who is standing for caucus chair, and if she wins, the veteran Watty Watson, an OWM and former National Party supporter, will become party whip.

But Mazibuko’s bid for the title of leader of the opposition is about more than factional manoeuvring within the DA. Marginalised South African youth are becoming increasingly radicalised, their anger given voice — a growling fascist timbre — by ANC Youth League leader Julius Malema.

SA would be a bleak place indeed if Malema’s vision were to prevail: a Stalinist autocracy, riven by corruption, social conflict, and economic collapse. That a charismatic, young, black, woman with an alternative vision of the future might become the next leader of the opposition is a ray of hope, albeit faint.

It might even presage a time when that venerable job title means something again.

This Jaundiced Eye column appears in Weekend Argus, The Citizen, and Independent on Saturday. WSM is also a book reviewer for the Sunday Times and Business Day. Follow @TheJaundicedEye.