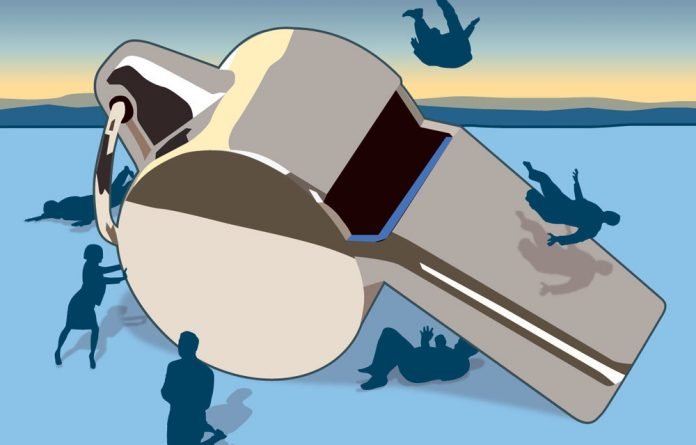 Whistleblowing counter the corrupting tendency of power, but whistleblowers are left vulnerable and at risk

Given the plethora of whistleblower stories emerging, it appears Mandy Wiener’s book, The Whistleblowers, has opened a new genre of nonfiction literature. It has also revealed a need begging to be filled by professionals and spiritual directors — to provide psychosocial and spiritual support to this category of speakers of truth to power.

Perhaps the most upsetting chapters in Mandy Weiner’s book, The Whistleblowers, tells two stories of whistleblowing that led to the deaths of loyal card-carrying members of the ANC — Moss Phakoe, who tried to expose corruption in the Rustenburg municipality, and Jimmy Mohlahla, of the Mbombela municipality, who tried to expose corruption linked to the Mbombela stadium ahead of the 2010 FIFA World Cup.

Neither of these assassinations have been prosecuted.

What really upset me was its similarity with the murder of Bazooka Rhadebe, chairperson of the Amadiba Crisis Committee, on 22 March 2016). A close and trusted friend, he told me things I tried to convey to successive ministers of mineral resources and shareholders of Mineral Commodities Ltd (MRC).

We have to listen to these disconcerting truths about power and embrace these truths if South Africa is ever to weed out its systemic and endemic corruption. Yet, whistleblowers are left vulnerable and at risk.

Truth breeds trust, enabling society to function in five institutional domains — politics, academia, law, religion and the media. Abuse of power in any of these serves only to delegitimise the authority they require to function. But such “soft” issues cannot be mandated from power. They can only be inspired from within. Thus, trust and truth need to be embodied in real people with real stories — the whistleblowers.

SLAPP suits — Strategic Lawsuit Against Public Participation — are a standard weapon in the armoury of power such as defamation suits, interdicts and bogus disciplinary procedures. As I write, my whistleblower support WhatsApp feed directs me to the testimony of Passenger Rail Agency of South Africa (Prasa) whistleblower Martha Ngoye, who testified at the Zondo commission into state capture.

Previously, Ngoye identified herself as a whistleblower and asserted she was being victimised. Although her former boss, Lucky Montana, is no longer group chief executive of Prasa, he clearly wields power over the board. Ngoye, dismissed as Prasa’s head of legal services in January this year, together with two other executives, Tiro Holele and Nkosinathi Khena, contested the dismissal and won. Prasa sought leave to appeal and on 13 May Acting Judge Moses Baloyi dismissed the application.

It is clear what Prasa’s plan is — a variant of the SLAPP virus, which I am naming strategic litigation on whistleblowing — SLOW.

As I listened to Ngoye’s testimony, it was clear that Prasa’s SLOW strategy was fast unravelling. She spoke with confidence and clarity, her testimony ringing so much more truthfully than Montana’s some months back. Ngoye confidently refuted Montana’s fabrications that she was to blame for the notorious R3.5-billion Swifambo Deal.

Another SLOW death looming is the City Press story of an Estate Agency Affairs Board employee suspended after alleging irregular conduct and improprieties by the chief executive, Mamodupi Mohlala-Mulaudzi. Despite Minister Lindiwe Sisulu intervening to order a forensic investigation and instruct the board to suspend disciplinary proceedings, the board, chaired by Nkosinathi Biko, is continuing.

Power tends to have a distorting effect and tries to control the narrative. Powerless and ostracised whistleblowers may have their own biases born out of fear and loneliness but, with support, can overcome the “poverties” of their fundamental human needs system leading to hope and healing.

Whistleblowing is a vital sobering preventative vaccine against the corrupting tendency of power, and a vital avenue back to reality.

Society needs to fund professionals and spiritual directors to enable whistleblowers to receive the psychosocial and spiritual support they need.

Second, society needs to stop funding legal professionals who actively hinder and obstruct the emergence of truth — or worse, condone perjury. We need to “Stop SLOW”. How about a new protected disclosures Act that introduces some punitive measures against lawyers who conspire in the abuse of legal process?

Third, the media needs to be a safe harbour for whistleblowers. If a whistleblower cannot be killed, or intimidated by “lawfare”, power will often resort to a strategy of character assassination through the media.

Finally, we need to hold the feet of all political parties, especially the ANC, to the fire to ensure that they internalise a culture of support for whistleblowing in their own ranks.

State capture was facilitated by the legal profession, and even perfecting the Protected Disclosures Act won’t stop lawyers from abusing legal process against whistleblowers if there are deep pockets to pay them. Neither is it going to stop state actors from abusing their power. Those same deep pockets go deeper still.

South African anti-corruption lawyer Colette Ashton points out that international anti-corruption law is built on the premise that the executive has an inherent conflict of interests when it comes to prosecuting corruption as beneficiaries of corruption are also ultimately responsible for enforcing anti-corruption laws. With the arms deal scandal and state capture clearly demonstrating the above, it would be folly for whistleblower protection to be entrusted to the state alone.

Active citizens across civil society and social media is where truth, trust and authentic transformation will emerge.

But the state must never be allowed to shirk responsibility. Civil society will deliver whistleblowers to them, but only if they get some vindication through the courts.

A longer version of this article is available here.