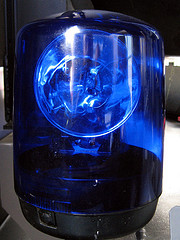 1. The DA’s Dianne Kohler Barnard’s parliamentary question regarding Malema’s alleged use of a VIP blue-light convoy;

2. The trial of VIP protection officer Hlanganani Nxumalo, accused of causing an accident by shooting a gun at a motorist;

4. Police investigating the deaths of four men run over by a convoy of speeding VIP vehicles.

Three are from South Africa. The last occurred in Russia. All involve VIP vehicles with flashing blue lights ignoring road rules and causing death and injury to ordinary citizens.

Curiously, Russia and South Africa are two of the world’s biggest offenders when it comes to the deadly abuse of “blue-light” privileges by powerful VIPs from politics and business. Both are “new” countries, barely 20 years old. They are also two of the world’s most unequal societies.

I may be obsessed with making up specious parallels between South Africa and Russia, but it can’t just be a coincidence.

What is it about countries transitioning from authoritarian regimes that inspires such fantastic status anxiety among their new and aspiring elites?

Back in early 90s Russia, you had about as much chance of making it across the street alive as a Stalin-era political prisoner had making it out of the Gulag.

In those free-wheeling, dog-eat-dog (and sometimes man-who-had-not-been-paid-in-months-eat-dog) early years of post-communism, a small and ruthless group of politically connected individuals grabbed most of the country’s wealth. If few people had cars in the USSR, even fewer could afford them in a new Russia teetering on the edge of total socio-economic collapse.

So those rich, powerful or criminal enough to do so made sure everyone knew it. Ploughing their armoured black Mercedes and Range Rovers through red lights and pedestrian crossings, they had no fears of knocking down a hungry pedestrian or two. After all, no car=no money=nobody. It was motor-Darwinism.

But as the peasants gradually started to get their hands on rickety second hand Nivas and condemned Volkswagens from Western scrapyards, VIPs grew anxious. Getting around the newly forming traffic jams was easy enough — that’s what pavements are for!

The real threat, however, was existential: expressing your inherent superiority over the plebes when the mere fact of having a car, no matter how outrageously expensive, was no longer enough.

You needed to either be a government minister or have an official permit to get one, and the bribes and connections required were steep, putting it, and you, definitively out of the rabble’s reach.

By the end of the decade, more luxury car drivers had flashing blue lights than valid licences. They came to be known as migalki, or flashers.

South Africa appears to be little different. From road rage to airport angst, the message is the same: power and money don’t just buy you a better life, but also the right to live by different rules.

Maybe it’s the grotesque inequality and missing middle class in either society, which gives people a very stark choice: either stay on top — by any means necessary — or end up at the very bottom. Better be the guy with blue lights flashing and guns blazing than the guy crashing into a bakkie.

Maybe it was caused by the decoupling of wealth from status under the apartheid and communist regimes.

An exclusive group was in charge — whether the Broederbond or Central Committee — who lived by their own rules while dehumanising their subjects; if you weren’t one of them already, you could never be let in, no matter how much money you had or what your achievements, particularly if you were black in South Africa. As some of the formerly poor and oppressed have managed to claw their way to the top, perhaps the blue lights embody the explosive release of all their intense feelings of insecurity and resentment, along with the ingrained sense that only exclusive status, above money and power alone, can prove success.

Maybe it’s the lack of shared social values due to a moral vacuum cause by the dismantling of old value systems before new ones could fill their place.

Or maybe some people are just power-hungry, egomaniacal, sociopathic jerks.

Whatever its cause, the belief that VIPs are above the law can have no place in a democracy, which depends on the notion of equal citizenship.

Not surprisingly, the most stable and successful societies are ones in which powerful political and economic figures act like normal people. Scandinavian prime ministers walk to the office. In Britain, senior politicians ride their bikes to work, or take public transport.

But it is possible to fight back against the blue-light mafia.

With the aid of YouTube and social networking, ordinary Russians have started documenting and shaming VIP traffic abuses.

Wearing big blue buckets over their heads, vigilante activists known as the Blue Buckets conduct audacious and surrealistic stunts: one such protestor even jumped on the roof of an unmarked black secret service vehicle (before being arrested and beaten up).

In solidarity, thousands of fed-up motorists stuck blue buckets on the roofs of their cars and refused to yield to speeding migalki. Even Russia’s all-powerful leader Vladimir Putin has started to notice, moving to curb the blue-light practice among officials and cracking down on unauthorised flashers.

The time has come for South Africans to also don their blue buckets and not give up until VIPs take off their tin-foil hats and finally embrace democracy.

Journalist Vadim Nikitin claims to be working on a book about nostalgia. He blames his poor judgement and unhealthy obsession with the past on having been born perilously close to the Soviet Union's largest nuclear submarine base.