Official sketches leaked of Audi A1 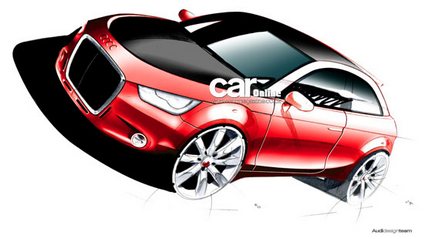 I just got word that Car magazine has obtained the first official sketches of the so-called Mini-killer, the Audi A1. They write that these sketches have been “smuggled out of Audi’s design HQ”. The sketches show Audi’s tiny hatch in three-door trim, though a five-door, coupé and convertible are also planned.

After jealously eyeing five years of BMW success with the pricey Mini, Audi is undoubtedly interested in entering the B-premium segment (or super-Mini), a segment that has grown in appeal since the reincarnation of the Mini. The A1 aims to be a classy hatchback, with Audi’s typical design style and all of the “vorsprung durch technik” rhetoric.

Besides the A1 featuring the all-new seven-speed dual-clutch transmission, the sporty hatch will also be all-wheel drive, which was also engineered for an offroad version (the Q1) and for use by the S1 (in the first sketch), which could be a rival for the Cooper-S.

Audi has set very ambitious sales objectives, starting at 100 000 units in 2010 and ramping up to 190 000 units once the open-top and Q1 versions are in production. Reason for this is the price is a tad lower than a comparably equipped Mini, with the Audi retailing for $22 000 (about R160 000). No word on the official South African price or when it will hit our shores.

Charl Norman is the web entrepreneur and freelance journalist behind online automotive titles such as the social network Zoopedup.com and the country’s leading auto blog, carblog.co.za.