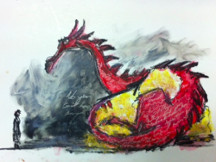 An open letter to Money

We need to talk. I’ve been meaning to write this letter to you for a while, but I got side-tracked and spent a whole lot of time doing other stuff, and then I was busy starting a new agency and so it didn’t happen. But it turns out that open letters are the in thing now, so I thought I might as well jump on the overloaded bandwagon before it gets pulled over by the Metro cops.

This isn’t easy for me. We’ve never really got on very well, but it’s time I was honest. The truth is, I’ve always felt nervous around you, like I need to apologise for something. I’m not exactly sure why, but I find it difficult to ask for you or talk about you, and when you come up in conversation, I go bright red and change the subject.

Maybe this has its roots in my childhood. Rationally or not, I grew up afraid that one day you would abandon me. I knew there were others who had a great relationship with you and I envied them. They never had to worry about you; you were always there for them.

Can I just say that I detect a bit of favouritism? You seem to like hanging around certain people regardless of whether they deserve the time of day. As Dorothy Parker once said: “If you want to know what God thinks of money, look at who He gave it to.” You come when they call you. Yet others can whistle until they’re blue in the face, and you ignore them. You play with their feelings, letting them think you’re going to be theirs, but all along you have other ideas.

I know it’s all relative. Compared to the people I see holding signs at the robots, we are on first-name terms. There are more than enough people in this country who have no idea what it’s like to have you in their lives for me to justify much in the way of angst when it comes to my own situation.

Do other people feel guilty about loving you, or wanting you? In a city filled with people who adore you and make sure everybody knows it, I don’t know if I love you enough. I know you’re important, and I like having you around. I love the things you can do for me, and I know only too well that whoever has you has the power. Yes, I work hard, sometimes incredibly hard — but I’m not sure it’s for you. I’ve never fought hard enough for you, never wanted you enough. There are times when I want to hold onto you, when I’m terrified to let go, and times when I honestly don’t care.

Lately that has started happening more and more. Recently I read that giving you away is what makes people happy. I should be ecstatic, then: this year I’ve loaned or given a lot of you away, way more than I’ve brought in. Charities, friends, good causes — I hear someone needs something and I’m there, making that EFT, waving my equivalent of a magic wand. Partly this is because recently I’ve become addicted to giving you away — the compulsion, then the high, followed by the hollow, empty feeling and the need to do it all over again — and partly because I don’t need you if I don’t have a future to hold out for.

When it comes to getting you, of course, it’s a different story. I forget to invoice, or do it late, or debtors ignore my mails and I let it slide because I just don’t have the energy to fight with them.

Why is giving you away so much easier than bringing you in? I suspect the problem may be that I’ve never felt good enough, never felt that what I do is worthy of you. It’s a problem a lot of us have.

I want to fix this. I want things to be better between us — because I know that if I let this awkwardness between us persist, I am going to be in real trouble. Trust me, I’ve seen enough heartache where you are concerned, and one day, if I can afford it, I’d quite like to have a home of my own again.

I don’t know how. But I do hope that one day, it will all be OK between us. I hope you understand.

Published in Business and Lifestyle