I first knew about it after seeing this tweet: 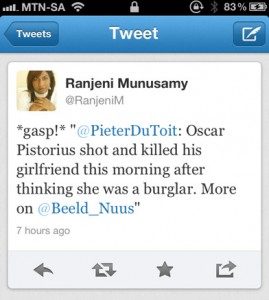 That’s how it usually happens, now, with news stories.

I felt ill. Like I’d been kicked in the gut. Partly because of the shock of it. Oscar Pistorius, of all people! Because an innocent person died, because it was an accident, because nobody should ever have to live with the knowledge that they are responsible for the death of someone they loved. Partly too because Oscar was our story, a hero who, for all his flaws, overcame the odds and exemplified the greatness of the human spirit.

He was a great South African brand, and now his story, and our part of it, lay in tatters. Because who shoots his girlfriend by mistake unless he lives in a country where the possibility of violent crime is ever-present? So my sadness was selfish, in a strange way. Madiba aside, he was one of the few things we have going for us at a time when the headlines revolve around names like Marikana and Anene, and now it seems we can’t have this either.

That Oscar was our good thing, a national treasure, has been echoed by the international media, who have trumpeted the sensational shock of it across their front pages. It scrolls ceaselessly across the 24-hour news screens. The residents of the gated estate where Oscar lives — a “compound” as Sky describes it — will have to get used to outside broadcast vans camping outside their gate. Oscar was a global celebrity, and this is as juicy as news gets. His legion of sponsors and advertisers must surely be in damage control mode; already the M-Net billboard I tweeted about this morning — how poignant it now seemed — has come down. Nike’s site couldn’t have been more unfortunate, carrying as it did this image:

That’s the public side of it. On the private side is Reeva Steenkamp’s family, who must now deal with their private grief through the lens of global public shock. There is also Oscar, whose mask slips with every revelation. The stories about his fascination with guns, past evidence of a temper, tweets like this one

and stories like this, which lists the weapons he kept in his room in a luxury home in a high security estate.

They didn’t matter so much before, because he was a hero and we wanted him to be perfect. But the story has changed, unimaginably. Once the South African hero, Oscar is now just another South African tragedy.