Why I loved Material — and you will too 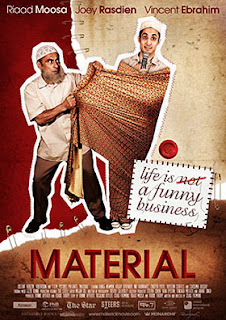 I hate crying at the movies. Always have. For some reason, I feel deeply uncomfortable about showing emotion, even if nobody else can see it in the dark. And yet the first time I saw Material I cried. That’s the sign of a good movie: a story that can move the audience to laugh and cry too.

The tale is a simple one of a father and son who want different things out of life. Cassim Kaif works in a struggling Fordsburg fabric store that has been in the family since 1943. His father Ebrahim wants his son to continue the family business, but Cassim’s passion is standup comedy. It’s a story that repeats itself in societies around the world: the bitter, angry father who wants control at all costs; the son who wants to please his family, but cannot still that nagging voice that reminds him that he wants to do something else with his life.

The wrenching emotional heart of the movie takes place in a smoky, boozy comedy club, when Ebrahim decides to take a chance and watch his son perform. In the Hollywood version of a story like this, Ebrahim would laugh along with the crowd and everyone would live happily ever after. But Cassim’s jokes, at the expense of his father, are just that little bit too cruel. There’s a heartbreaking dramatic irony here, and I felt genuinely uncomfortable watching that scene. You’ll have to watch it to see what happens next, but the point of Material is less the narrative trajectory (which like all good family movies does resolve on a positive note) and more in the detail: a lot like the fabric on sale in the shop. It is in the nuanced weft and warp of character and story that a world is brought to life, and it’s one in which people live their lives in peace.

In one scene, Riaad Moosa jokes about the fear Muslims inspire when they board a plane, but we South Africans are a pretty relaxed bunch compared to other Western countries, especially Australia or the US. Perhaps it’s because Muslims have been part of our Liquorice Allsorts society for centuries. Watching the Johannesburg premier, I sat next to 702’s Aki Anistasiou. Afterwards he observed that the story could have been told about the Greek community: the expectation that you’d work in the café, and the resistance if you wanted to do something else. I would guess that this is true of so many other communities where family is paramount and obedience to your elders is expected: Portuguese, Italians, Afrikaners — most of South Africa, really.

At the premier I was lucky enough to meet some of the stars, including Riaad Moosa, Carishma Barsday and Vincent Ebrahim, a charming man who graciously expressed his feelings about the South African Constitution while I filmed him on my iPhone. That one of the stars of The Kumars at Number 42 was willing to be involved in the movie says a lot about the quality of the script.

I liked a lot of things about Material. Besides the quality of the performances — unlike a lot of movies featuring South Africans there isn’t a single cringe worthy note — there is the pleasure in the detail of place and the rhythms of daily life. Though there are a couple of references to race and apartheid, this is not a movie about issues. Instead, it’s about people leading ordinary lives. National identity was the focus of my thesis, so I tend to view South African stories through that particular prism. In Material I saw the kind of South Africa we should celebrate: a nation that is comfortable with difference, where respect for culture and tradition does not prevent us from laughing at ourselves.

It was Ronnie Apteker, one of the executive producers, who first got me excited about Material last year. He’s worked tirelessly to promote this movie, which has been a labour of love for years for him, as well as for Riaad Moosa and director Craig Freimond. The traditional rule is that the only South African movies that make money are the ones that feature Leon Schuster on the bill. Go along and see Material, and help make it a notable exception.