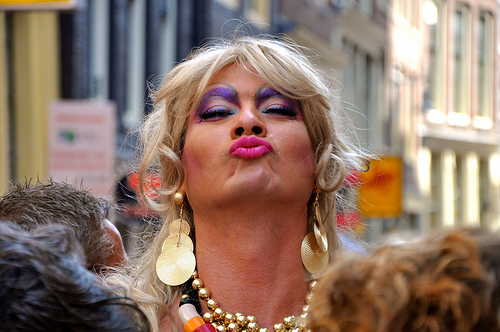 Frogs and queens: Crossdressing and déjà vu (I)

Most of us have split up with a member of the opposite sex. I love the unintended pun: splitting genes, separating the masculine from the feminine. My favourite was Frances. She betrayed me while we were still “an item” for a friend, Angus, who turned out to be a cross-dresser. To everyone’s surprise. Imagine being picked up by a guy who arrives for the date in skirt and blouse, be-wigged, face tarted up with the latest in Revlon and L’Oreal because you’re worth it darlin’.

Snakes alive, jusssst picture my smug satisfaction when I heard this juicy smut from fellow Broken Hearts who saw them having a ladies’ night out. Their date, meant to be clandestine, skirt and dagger, became headline news in our circles, the stuff of urban legend. Angus came out of the closet, and so did Frances. She preferred her blokes that way. Or so the argument went in our crowd because the couple got very serious. As one fellow Broken Heart reported, “I didn’t just see them holding hands dude; there were some serious face-sucking sessions, her bra firmly squashed against his”.

This, of course, helped me deal with the emotional wounds, the jealousy. I licked my lips at the thought of my ex being pawed by a cross-dresser in public, and just what that was doing to her name, never mind the spicy office talk about “Frangus”. Woof.

That in turn reminded me of the bromances our men’s Broken Hearts meetings turned into. From have-another-beer-boet, next-round’s-on-me sessions, I saw the raw pain as blokes talked about lost loves, cheating girlfriends. It was awesome to see jollity turn to barely held back tears. There was a phew of relief when the rugby came on or it was time to order dinner. In other words, do something meaningful and bloke-like, like bang on the table and yell, waiter!

Yes, we were just running in the opposite direction of what should be explored. We were stuck in our straitjackets of bromance, where even our clothing becomes a mould, with T-shirts like “Drink until she’s cute”.

We all know men are apparently less likely to express their feelings, unlike women. Here in New Zealand I belong to a men’s group, where blokes are encouraged to really talk through their stuff. We even use Byron Katie’s teaching. One night I asked a fellow member, Mike, how he felt about the unfairness, even the cruelty, with which his ex-wife and the social welfare authorities treated him. Note his answer in bold. “Well, what I did was get involved with a group called Northshore Fathers.”

“Yes, but how did you feel about not having your children live with you? What your ex did? What about the helplessness, the sense of outrage …” I added, realising I was at risk of putting words in his mouth.

“Well what we did was approach CYF, even organise street demos, protesting against them …”

Mike just didn’t get it. How men feel. The last thing likely to occur to us. We are doers.

And in the beginning of this blog I described how I didn’t work with how I felt about Angus and Frances’s betrayal. My method of coping was vicarious, through the delicious scandal of her and Angus crossing a (so-called) taboo and looking like idiots — within our narrow Joburg north conventions.

So I never dealt with the issues. Angus or Agnes was the safe scapegoat, the object of derision, or simply completely misunderstood and laughed about. He was the frog who became Frances’s prince once he arrived in feminine splendour. And for the rest of us he became a frog instead of staying one of the dudes.

But the way we dress, of course, is purely cultural. What’s one man’s bra is another man’s ear-muffs. With a surname like mine I come from an ancestry of skirt wearers (and where the hell did the Celts get “sweetmeats” from? Nothing sweet or cute about balls). On the three occasions in my university days that I have dressed in drag-queen outfits I have experienced the most tantalising feeling of discomfort (sort of “stop it! I like it!”). There was vulnerability, the weirdness of feeling at home — a kind of déjà vu — because I was suddenly feeling vulnerable. It was magic, the way I perceived myself and the world differently as soon as I cross-dressed and put on make-up. It was as if I’d never known my genitals before: soft, vulnerable, in need of shielding, even of a kind of penetration, almost precisely the magnetic way in which I experienced, even in thought, a woman’s sex.

I was too young, too awkward, to put those experiences into the words that I can now. The experience was potentially cathartic, therapeutic, even transcendent. I say “potentially” because I was in the husky male environment of places like Rhodes University, where such behaviour was only allowed for brief periods of time and you could not easily talk about experiences like this in the Eighties. I experienced a strange déjà vu (is there another kind?) through touching the female clothes I had on, by feeling them on me, by looking at and smelling them, and knowing I was being looked at by others. It was a feeling of having been here, dressed like this, before. Something in my ancestry stirred in me. And there was the uncanny presence of my already passed-on elder sister’s femininity, her worried way of looking at me because she was old enough to move out of my parents’ house into a safer place, which our home was not.

The above, of course, I never shared with fellow men, or doers. Nor did I become a cross-dresser. But it left me with these questions:

Just why is it that women can get away with wearing “men’s” clothes but men cannot get away with wearing women’s clothes? What is this transcendent, even déjà vu-like experience, which can happen in a man when he cross-dresses? (This does not happen in a woman, one reason being there is little or no male-specific clothing left in the West.) And this experience, according to research and personal testimonies, is profound and nothing new, as I will try to explore.

Published in Equality, General and Lifestyle

CRACKING CHINA was previously the title of this blog. That title was used as the name for Rod MacKenzie's second book, Cracking China: a memoir of our first three years in China. From a review in the Johannesburg Star: " Mackenzie's writing is shot through with humour and there are many laugh-out-loud scenes". Cracking China is available as an eBook on Amazon Kindle or get a hard copy from www.knowledgethirstmedia.co.za. His previous book is a collection of poetry,Gathering Light. A born and bred South African, Rod now lives in Auckland, New Zealand, after a number of years working in southern mainland China and a stint in England. Under the editorship of David Bullard and Michael Trapido he had a column called "The Mocking Truth" on NewsTime until the newszine folded. He has a Master's Degree in Creative Writing from the University of Auckland. if you are a big, BIG publisher you should ask to see one of his many manuscript novels. Follow Rod on Twitter @ https://twitter.com/Rod_in_China