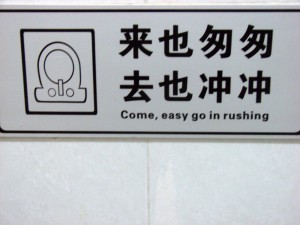 I stared in awe and envy at the large sign above the public loo. “Come, easy go in rushing”. Me being me, the Freudian meaning first sparkled through my mind: “Take it slowly as you build up to a climax”. Well, I knew the sign could not have that steamy meaning even though loads of desperate youngsters have used – ugh – toilets to satisfy the human race’s most powerful urge. What’s a rock concert without seeing young couples disappearing into portable toilets?

Then I got the toilet sign’s meaning. I think. The original Chinese translates (parses) far better into English as: “Take your time; there is no need to hurry”. That meaning is so much more hospitable. In other words, “Hey, relax, make yourself at home”. Welcome each bottom to the glinting toilet seat as a treasured guest. Give those sweet cheeks a hug.

Ooooh, I am so envious. I simply cannot write anywhere near as well as the riches to be found in Chinglish here in China. The semantics are scattered, making sentences so alive with possibility, pearls flung shimmering across the floor from a necklace that is broken by mistake while lovers climb into each other on the bed.

The word “mistake” is the key word in the above sentence. When we write in our own languages, we write in the grooves of a “correctness” that reduces enormously life and life experiences. In fact, the diminishment is beyond comprehension. I have often spoken about words as labels and the fact that we confuse what people are with the labels we give them. Oh, he’s a Catholic. He probably doesn’t have a wicked sense of humour. Oh, he’s gay, he must be emotionally attuned. He’s an atheist. He must be angry and depressed. He needs salvation. Just think about it, so much of our perception is limited by the language we constantly use and which deepens the same old grooves in the mind.

So isn’t it a fascinating thought that the realm of rich possibility lies in what we label as “mistakes”?

Perhaps I shouldn’t be spending so much time in the toilet. (Both literally, and, for some of my prudish readers, also figuratively.) But there are other signs in this particular public loo which announce, “A small step forward, A step of civilization”. “Why?” you might ask. Because they grandly hang above the men’s urinals. Get up nice and close; don’t mess on the floor; think of the next user. 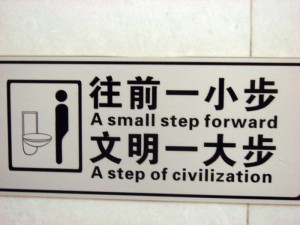 And don’t worry, I was holding the camera with both hands when taking the photo of the sign above the urinal. That is to say, I wasn’t using one of my hands at the time.

Noddy badge? I do believe I deserve one for having the nerve to take a camera into a public toilet.

CRACKING CHINA was previously the title of this blog. That title was used as the name for Rod MacKenzie's second book, Cracking China: a memoir of our first three years in China. From a review in the Johannesburg Star: " Mackenzie's writing is shot through with humour and there are many laugh-out-loud scenes". Cracking China is available as an eBook on Amazon Kindle or get a hard copy from www.knowledgethirstmedia.co.za. His previous book is a collection of poetry,Gathering Light. A born and bred South African, Rod now lives in Auckland, New Zealand, after a number of years working in southern mainland China and a stint in England. Under the editorship of David Bullard and Michael Trapido he had a column called "The Mocking Truth" on NewsTime until the newszine folded. He has a Master's Degree in Creative Writing from the University of Auckland. if you are a big, BIG publisher you should ask to see one of his many manuscript novels. Follow Rod on Twitter @ https://twitter.com/Rod_in_China