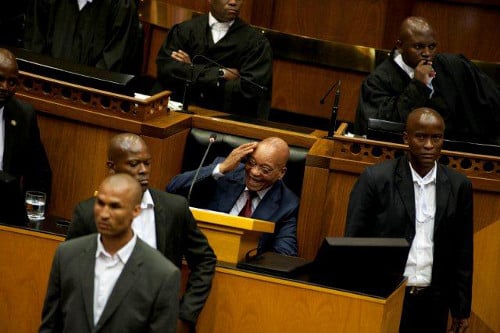 The State of the Nation address has demonstrated a few startling realisations to many of us. What was for a long time a subtle, nuanced, means of eliciting control over media and any opposition to government was flung out into the open during the address.

The ANC seems to battle with what Constitutionalism really is. The three arms of government are no longer recognisable. Dipuo Peters, and her assertion that the actions of the EFF were unconstitutional is inherently wrong. The disruptive questions posed by the EFF were not unconstitutional – there was no hate speech nor conduct that did not abide by the Constitution. Rather the response by the Chairperson of the NCOP, Thandi Modise and The Speaker, Baleka Mbete were not Constitutional. The actions of the EFF may not have maintained convention – and ruffled feathers, but the arrogance and heavy handed response by Mbete and Modise demonstrates a complete lack of impartiality and ability to be calming and in charge. The fact that Mbete clapped for the President, Jacob Zuma further attests to this.

The reality is that the ANC is running scared. The once powerful cabal that controlled everything for the past 20 years is being faced with an erosion in its support and a definite lack of trust in its actions. There is no respect for the rule of law and the Constitution. The paranoid fear of the media – as clearly actioned by the signal jamming device shows that we are ultimately heading for a showdown. The Government of South Africa vs the people. A sense of entitlement follows every ANC bigwig. There is a complacent glow and belief that the ANC knows best…

This is not the reality. The State of the Nation address, was a self congratulatory piece that showed how far removed the governing party is from the people that pay their salaries. The was no critical analysis of the actual state of our country. Rather a tepid discussion on our power woes and the need for an economic boost. We as South Africans are faced with load shedding, crumbling infrastructure, a failing healthcare system, an education system that has failed and a corrupt government fixated on control and power at all costs.

The events preceding the address, where DA supporters were attacked by riot police and the actions that took place within the confines of parliament is a shameful indictment of all that we have fought for in this country. It is the day that democracy died.

Ravi Mackenjee is a 36-year-old businessman with a keen interest in politics, the social environment and has a penchant for the law.