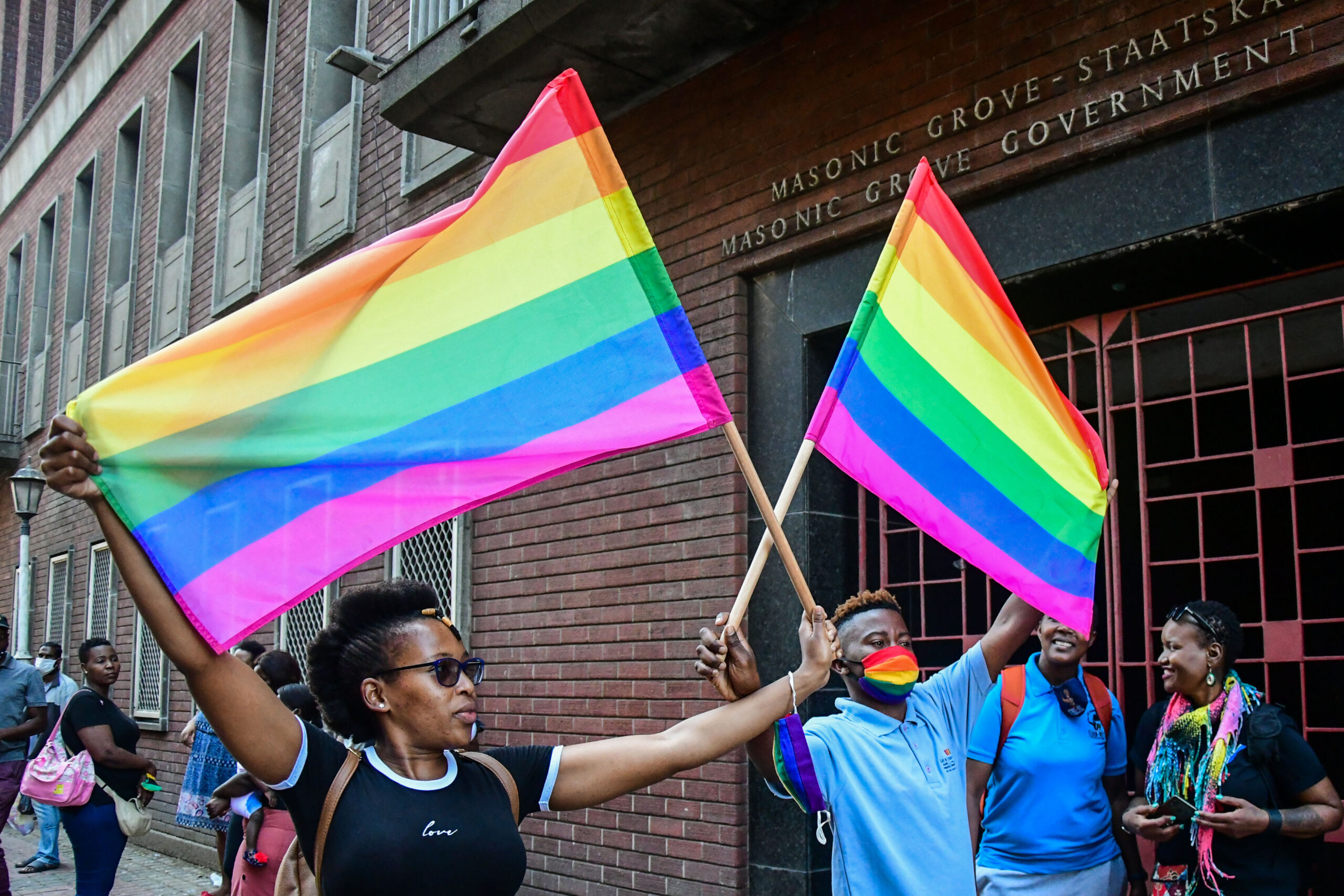 They placed his bloodied shoes at the gate of his home. They had left his stabbed and mutilated body in a sewerage manhole. This gruesome murder of Sphamandla Khoza is one of the latest in a chain of murders of gays, lesbians and transgender people in South Africa. It is so commonplace that one reads it like the many violent crimes that happen here. The banality of violence against queer bodies masks the gravity of what it is — hate crimes.

Queer people in South Africa continue to live in the ambivalent precarity of violence and constitutional freedoms that “guarantee” equality and non-discrimination. Constitutionally guaranteed freedoms and rights are just that — words imprinted in black and white in what is believed to be a supreme document. If no one enforces adherence to the ideals of the constitution, those rights amount to nothing.

Queer South Africans, particularly those from the poor working class, have to navigate hostility from their families, and if their homes are a refuge, they still have to deal with the community that poses a danger to their existence. An ordinary activity as going out to buy bread at the spaza shop can turn out to be one of the worst experiences for a queer person. In the case of Sphamandla, going out for a drink with people he already knew, ended his life.

The minister of justice and correctional services proposed the Prevention and Combating of Hate Crimes and Hate Speech Bill to address some of the stubborn discriminatory tendencies within South African society as the “rainbow society” ideals remain elusive, and the expression is just but a vapid omnibus phrase with no substance outside political rallies. For the broader South African society, there seems to be an emphasis on rampant racism that casts a long shadow of continuity of apartheid structures and attitudes. For sexual minorities, the focus is on how the bill addresses hate crimes that they have been encountering for decades while perpetrators bask in impunity.

On 21 April 2021, after a spate of murders of queer people, a coalition of organisations jointly released a statement urging the government of South Africa to “urgently finalise and enact the Prevention and Combating of Hate Crimes and Hate Speech Bill, which was first drafted in 2016 and was approved by cabinet in 2018” among other things.

The enactment of the law itself is far from enough to deal with the plethora of challenges faced by sexual minorities. Implementing and operationalising the law is probably the first bold step, and that is where lies the major problem. In its submission to the Parliament of South Africa, Corruption Watch has already caught police services offside in protecting victims of gender-based violence, with “sextortion” of victims and disappearance of dockets being impediments. This situation poses questions on the readiness of the police services to implement the Bill should it become law.

Changing social attitudes cannot be implemented by law. Political and religious institutions are some of the most powerful and influential entities in contemporary society. Their silence on queer violence is conspicuous and quite bothering. It renders them complicit in these crimes. South African politicians need to assert the Constitution by speaking out against queerphobia. They do not need to be reminded by pressure groups that they must protect and advance the Constitution. The “see no evil, hear no evil” response is enabling violence.

I acknowledge that the ruling party, the ANC, has been bold enough to swim against the regional tide by asserting the rights of sexual minorities. However, when the country ironically becomes infamous for murders of gay, lesbian and transgender people, all that progress is lost. If anything, it emboldens the homophobic regimes to either maintain the discriminatory laws or tighten them further.

In my country Zimbabwe, the bar is way too low. There is no bar at all.

The constitution-making process of 2010-2013 was revealing. Political, religious and pressure groups engaged in a competition of whose homophobia is the boldest and most scathing. The unquestioning state media happily provided a channel for hate speech to be spewed with reckless abandon.

While the ruling ZANU PF’s homophobia is unsurprising, the Movement for Democratic Change (MDC) formations failed to formulate positions on the protection of sexual minorities. Their responses were muted and non-committal. They preferred to kick the issue of sexual minority rights into the long grass, leaving it to the “people of Zimbabwe” to take a position. Of course, that position was predictable, and it was disingenuous to hide behind the “people of Zimbabwe.” Homophobic intolerance is rife in the largely conservative Zimbabwean society.

Far more disappointing were human rights-oriented civil society organisations. For political correctness, they steered clear of the issue. Queer activism in Zimbabwe seemingly remains an isolated task for the few organisations that focus on the rights of sexual minorities.

Zimbabwe has been in a political crisis for two decades now. Human rights violations have been consistent in the postcolonial period much as they were, pre-independence. The crisis inevitably created robust human and civic rights movements. We probably have the densest human rights NGO concentration in the region. Ordinarily, one would expect queer activists to have abundant allies and opportunities for support due to vast organising experience in human rights advocacy.

Earlier this year, one of the most articulate Zimbabwean commentators and constitutional law expert Alex Magaisa published a compelling blog article titled “An intersectionality approach to democratic struggle in Zimbabwe.” In the article, Magaisa illustrates how there exists “multiple struggles within the broader struggle” in Zimbabwe. The blog makes a compelling case for how gender, class and ethnicity intersect in the repressive axes, making Zimbabweans experience domination differently within the broader struggle against ZANU PF’s systemic repression.

For those who are familiar with intersectionality, one expects queer struggles to be part of the focus. Surprise! There was none of that in Magaisa’s article. It was a disappointing missed opportunity since many people read and understand his simple and clear explanations of otherwise very complex subjects within the Zimbabwean polity. A conversation on intersectionality provides the best platform for articulating queer struggles, no other space can make it more lucid.

Such is the condition of queer struggles in Zimbabwe. Queers are made visible by the misrecognition of unrelenting homophobic tirades and their struggles are concealed by the symbolic annihilation of silence from “democratic” forces. Queer activism becomes a complex process of managing visibility on unstable ground, negotiating the assertion of rights, and in all this, quite alive to the possibility of triggering outrage that can complicate the safety of queer bodies.

On Sphamandla’s burial day, the Durban queer community came out, flags waving in solidarity, asserting queer presence, unequivocally registering anger, and most importantly, making it clear to all that the murder was a homophobic hate crime.

Queer people would rather wave flags at a Pride march, but the continued indifference of political and community leaders guarantees that there will be yet another sombre day of anger and sadness.

True to Achille Mbembe’s notion of chaotic plurality in the postcolony, queer people still navigate their lives in this ambivalence. The resilience of creating safe spaces is probably the most remarkable adaptation of queer existence. Queer advocacy organisations like the Sexual Rights Centre and the Gays and Lesbians of Zimbabwe continue to play a critical role in support and service provision, especially during the uncertain Covid-19 pandemic.

Outside formal organisations, queer people in South Africa, Zimbabwe and across the continent create their own communities. These communities establish liveable spaces where they articulate various queer subcultures and open imaginations of sexualities. Far from the rigid conservative cultures that package queer lives as deviance, queer bodies defy this and live diverse and complex lives.This article was the winner of the second round of the Troubling Power Essay Competition, part of the 40th anniversary of the Canon Collins Educational and Legal Assistance Trust.