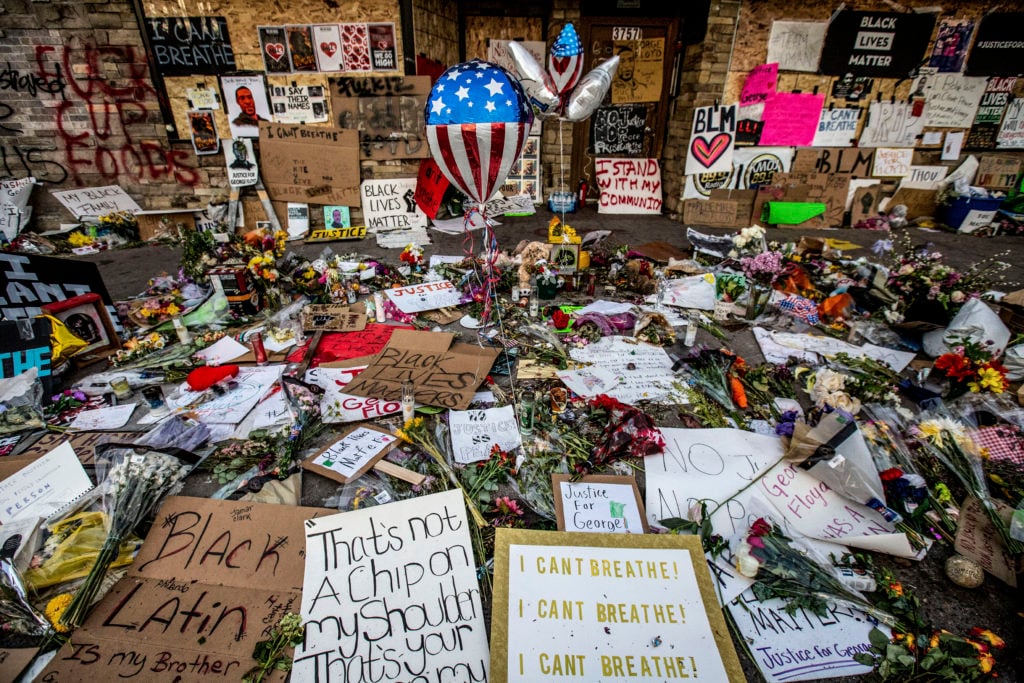 You would think that the contagious support for the Black Lives Matter movement over the past few days would leave one with an overwhelming sense of hope for racial equality in the United States and around the globe. Tragedy unifies and George Floyd’s horrendous killing by Minneapolis police officers has united all race groups, with solidarity for the cause being seen across the world.

Yet, it seems that with every inhalation of hope, we exhale hopelessness, which, not unlike Floyd, is slowly choking us to death. Our gasps are the realisation that today, nearly 60 years after the abolishment of the Jim Crow laws, or almost 70 years after Langston Hughes asked in his poem Harlem: “What happens to a dream deferred? /… Maybe it sags / like a heavy load. / Or does it explode?,” we still have systemic racism in the US. All these years later, and America is not only a dangerous place for a black person to live, but is a land that is still considerably more disadvantageous to be black in, with 37% of the country’s male prison population being filled with black inmates, unemployment of blacks being more than double that of whites, and black Americans being two-and-a-half times more likely than white Americans to be killed by the police.

Racial equality is more dream than reality and when a white police officer calmly and casually channels the weight of his entire body through his knee on to a black man’s neck — a man who begged for his life for over eight full minutes until he had no air left with which to plead — you would think that hope escapes with this breath. But that is not the moment where hope for racial equality truly faded, that was the moment when the motivation to fight back began. Hope truly faded when we realised that the protests that this horrendous act sparked would most likely never have happened had society not been stretched to its absolute limits.

That’s how systemic racism is in the US and, despite the numerous placards being waved with Floyd’s face, and the chants of “I can’t breathe” ringing around the world, this is not about Floyd, or police brutality of black men, or racism, it is about so much more. It’s about the worst global leadership that we have ever seen; it’s about the measures taken to reduce the effects of a global pandemic leaving us isolated, frustrated, economically pressured and for many, in sudden poverty. It’s about the de-socialisation of society. It is about partisanship, the rise of nationalism and the rise of increasingly fundamental polarities on both the far left and the far right. It’s about the death of capitalism, the scourge of libertarianism, and the no longer acceptable gap between the haves and the have-nots. It’s about immigration and religious intolerance, xenophobia and it’s even about climate change. It’s about not being heard. It is because of all these reasons that we have people in streets around the world calling for change in George Floyd’s name.

The truth is that Floyd’s death simply isn’t that unusual, which of course is the point.  We have just done little about it until now. Indeed, there has never been a moment in America’s history where this kind of treatment has not been the reality for black people, and it has been sung about, written about, cried about, highlighted on radio, in TV and films and in every art form known to man and we have even managed to get celebrities, in their self-important awards ceremonies, to talk about it.

Yet, remarkably, racism on its own was never enough for us to take to the streets with quite the same gusto that we have seen this past week. We needed a society on the precipice. Not even the brilliance of Childish Gambino’s This is America got us grumbling. Gambino was singing about George Floyd long before Floyd’s family even knew he was going to become a martyr. And before then we have had numerous excellent books, articles and films that places this racial moment in context. Books like Ibram X Kendi’s How to Be an Antiracist and Stamped From the Beginning, Keeanga-Yamahtta Taylor’s From #BlackLivesMatter to Black Liberation, Andrea Ritchie’s, Invisible No More: Police Violence Against Black Women and Women of Colour and so many more. Still we failed to protest.

There is plenty to read on how society is constructed to reinforce a structure of historical power as belonging exclusively to straight, white, Christian men, which leads to racial stereotyping and oppression. The African-American studies professor Frank B Wilderson, who coined the term “Afro-pessimism”, argues that racism, or rather “anti-blackness” is so ingrained that the structural reality of American society is one that links blackness to “slaveness”. Slavery, according to Wilderson marks the ontological position of black people. Thus, in the minds of many, and presumably in the mind of Derek Chauvin when his knee was on Floyd’s neck, humanity and blackness are in opposition, and are irreconcilable. Knowing this, understanding this, is a call to action. Is a call to protest.

With all this cultural and academic awareness, it is clear that the protests we are seeing are about the environment in which we are living and not the actual event. Had there been a mass shooting that day instead of yet another black man being killed by a white policeman, we most likely would have seen protests of a similar nature over gun control.

And that is why, despite the overwhelming support for Black Lives Matter, we feel hopeless, regardless of whether you adopt the Steven Pinker “life-is-the-best-it-has-ever-been” attitude or not. The horrid, often ignorant and purposefully misleading arguments against Black Lives Matter adds to the oppressive emotions. If I see one more social media post stating that “All Lives Matter”, I might just cry.

Obviously this is a way for the right to try and catch the left out for practising identity politics. Which is ironic on a number of levels but most significantly because identity politics is both more powerful and efficacious for right-wing populists than it is for liberals, since the former are more homogeneous. The left pushes identity politics so we can one day live in a world where none of us need to do that. The right does it so an elite few can retain money and power.

Advocating for universal human rights, freedoms, and opportunities by focusing on the identity groups who lack them is advocacy and not identity politics (the important word here). This is not boring semantics.

Supporting black communities on the back of Floyd’s death is not identity politics and Floyd’s death wasn’t as a result of institutionalised identity politics, it was as a result of an ideology that lay in opposition to what the institution was built on, run by a group with a very specific identity: a minority with power and money — white men, mostly wealthy, often religious or pretending to be so — who control societal and political norms.

Does this make it more or less abhorrent? I am not sure, but I do know that for a society to be healthy, fair and equal, there is no role, in the end, for any kind of identity politics, and although the term “identity politics” is bandied around with gay abandon, the reality is that it largely exists only ideologically and then only as a temporary tool for change, except in South Africa, and a small number of other countries, where it is has become dangerously institutionalised. This, at some point, maybe not in this generation, will result in the same kind of protests that we are seeing now in the US. When equality of outcome replaces equality of opportunity, you simply create a new privileged class to readdress the existence of a previous privileged class. The knee will change, and the neck will change, but you will always have someone’s knee on another’s neck.

Make no mistake, the Black Lives Matter movement, as with the Civil Rights Movement, is rooted in the pursuit of universal human rights and should be seen as a universal social change advocacy initiative.

Which swings us back to being hopeful. Thankfully, hopelessness is extremely fickle and transient and the most glorious blossoms of hope ironically grow in its soil, and a small glimmer of hope that has been created here is the awareness that racism is truly not innate but socially constructed and amplified by power. Be hopeful that our nature is not inherently the problem. Evolution hasn’t hard-wired us to be racist, but rather we hate other groups solely for our own benefit. This may seem obvious, and unimportant, but it is acknowledging that racism exists only as a construct that should give us hope we can deconstruct it and eradicate it.

Martin Luther King’s palace of justice does exist and it will be achieved by all of us satisfying “our thirst for freedom by drinking from the cup of bitterness and hatred”. Even though we lose a little hope that King is the one man we consistently quote on this matter and his dream has not yet been realised all these years later.