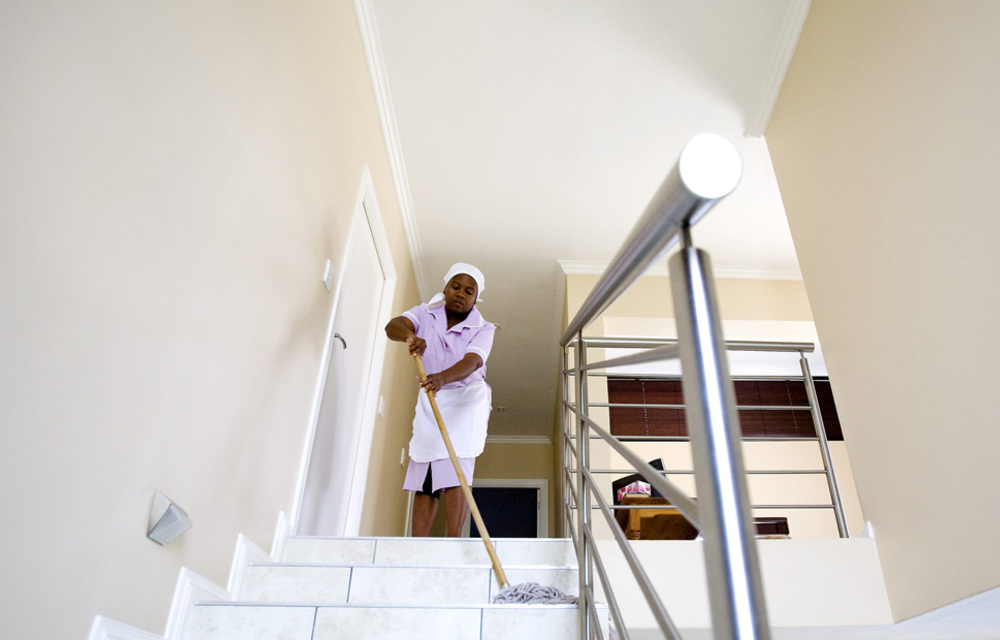 An ode to ‘kitchen girls’

These are the powerful lyrics of African songbird Simphiwe Dana’s new song Mama was a Kitchen Girl from her recently released, critically acclaimed album, Bamako.

This popular apartheid-era song is still sung today, by comrades and domestic workers among others in protest, celebration and expression, which speaks volumes about the entrenched and unequal practice that domestic workers in South Africa face, either by choice or obligation (physical or socio-economic coercion).

Although domestic workers can be any race, class or gender (I had a white domestic worker while living in the United Kingdom, which gave me a lot of cognitive dissonance as the child of a domestic worker myself). In the South African context, however, the majority of “kitchen girls” are poor black women who have been excluded from participating in the formal economy. As such, the face of a domestic worker in our country is a very specific picture of an undesirable, exploited and unmournable body of a black woman.

These women are some of the most disrespected, neglected and unprotected women in the world, to borrow from Malcolm X’s 1962 speech. Domestic workers often face many unheard, unseen and unspoken challenges and human rights violations because their offices are private spaces; people’s homes where the arm of the law does not reach all the crevices.

They are drivers of the country’s economy but are mostly unappreciated and underpaid. Globally, over 60-million women are domestic workers, meaning 1 in 25 women find employment in this sector. There are over two-million people involved in domestic work in South Africa today.

In most cases, domestic workers are uneducated single mothers with scant or no safety nets, so they are forced to go work in suburbia and live in the homes of mostly white, but sometimes black, middle to upper-class employers.

I am thinking of how women leave their own children to raise other women’s children, just to ensure their families survive. Such is the story of my own mother, who, when I was only six years old, had to leave my two older siblings and I to go and work and live in the private home of her white bosses.

My then 11-year-old sister, seven-year-old brother and I had to cook, clean, wash, iron, fetch water and generally look after ourselves while our mother was preparing another woman’s children for school or bed. There is a lot of bitterness as well “mommy” issues that are evoked when I think about it. My siblings and I missed out on the important role played by our mother.

Over the years my mother has been a domestic worker for families of different races and classes; Indians, coloureds, blacks and whites — the mistreatment, bad working conditions, discrimination and precarity transcended all those classifications of her bosses.

Most people she had to interact with in terms of domestic work were women, although most had husbands and children.

As Women’s Month draws to a close, I am inclined to think about the class struggles and differences between women in South Africa. One woman’s empowerment means another woman’s disempowerment; women’s emancipation doesn’t seem to equally emancipate all of them.

My mother is still labouring for another empowered woman who is a manager in her own professional job, while her own children are left without. Do we ever pause to wonder, who does the domestic work of the domestic worker? Who does the childcare of the nanny?

I think feminists and feminist allies like myself need to have a candid, roundtable discussion about women’s empowerment, gender mainstreaming and equalising the playing fields between women, not just between the sexes as the generic definition of feminism suggests.

I am not a woman and I am wary about speaking for or about women as I do not embody or occupy that oppressed identity marker. I do not mean to mansplain, I would prefer my mother to speak for herself, to let the subaltern woman have the mic, but because of myriad and layered, intersecting oppressions, including the English language and her proximity to whiteness, I have to narrate on her behalf. I am tasked with documenting, articulating and languaging the precarious and nerve-wracking conditions of domestic work in South Africa.

This is a wounded country; it has one of the worlds’ most atrocious pasts. We have been through the slave trade, colonialism, the apartheid regime and currently state capture and rampant corruption.

South Africa’s history crystallises the argument that mobilities of any kind are caught up in intertwined power geometries. The fact is, with physical and social mobility, someone is left behind, static or immobile. For me to move, someone must stop. For many women’s empowerment, many more women are disenfranchised. That is because, according to Kevin Hannam, “there are places [such as South Africa] that enhance the mobility of some peoples and places even as they also heighten the immobility of others”. It is this issue of physical and upward social mobility that affects bosses and domestic workers unequally.

It is important to note that apartheid was a means to an economic end; the end goal was to secure economic benefits for a white minority.

Yet, domestic workers still face exploitation, marginalisation and utter violence in the same way they did during the apartheid era. There are countless media reports of maids who have been raped, abused, unpaid, attacked and humiliated by their bosses.

Just last week, 64-year-old Khabonina Mkhonza, who works as a domestic worker in Springs, was allegedly attacked by her boss’s 28-year-old-son in front of the whole family, some of whom even held her hands to ensure that she could not defend herself. The son has now been released on a paltry R500 bail. This speaks to how even the justice system does not protect “kitchen girls” from trauma. They are  overlooked and continue to suffer under the current dispensation.

There are many other Khabonina Mkhonzas in this country — I see my own mom in her  — and I would like to profusely apologise for failing them all.

I have had first-hand experience of seeing my mom’s bosses ill-treating her; women would call her names, give her different cutlery, cups and plates and make her eat outside or in the cottage in the back. Some treated her as if she had the plague, ironic considering that she had access to their private space and food and was entrusted with looking after their children. In some extreme cases there was surveillance in the house, with multiple hidden cameras to make sure that she cleaned and did not steal anything from the house.

I am emotional writing this; recalling the humiliation and shame my own mother had to endure at the hands of other women of various races, who had power over her because she was financially dependent on their mercy.

A report by the World Bank shows that South Africa is one of the two most unequal societies in the whole world in terms of race, class and gender.

It is this political and economic milieu — where unemployment rates and levels of abject poverty are rising  — that domestic workers, like my mother and Khabonina Mkhonza, have to navigate.

The debate about the nomenclature of the role is exhausting because some people, in a bid to be politically correct, insist on calling domestic workers “helpers”.

In my opinion, this needs to be problematised because it removes the professional relationship and seems to suggest that these women are only assisting or helping. This can further entrench the underpayment and undermining conditions which they already find themselves in because there is no legal obligation to give a “helping hand” a minimum wage.

Names, labels and general vocabulary about domestic work — and indeed various other issues —  matters. It matters because if we do not use the correct terms, the remuneration, benefits and respect afforded to other professions can get lost in translation.

Imagine a secretary or accountant being called a helper?

By using this word in the domestic work context, we focus on the emotional, “feel goodism” instead of making sure that the unfair practices domestic workers find themselves in at the hands of other women and men are not addressed.

The middle-class, privileged and “woke” cabal insist on calling our mothers “helpers” on social media to signal how nice and politically correct they are when, in reality, many of them go back to abusing our mothers.

Women are not oppressed or empowered equally. Some women are gatekeepers of patriarchy and trample on or violate other women to get to the top.

I want to remind you to call my mother by her actual profession. She is a domestic worker and not a “helper”. Or, as the old anti-apartheid song goes, my mother is a kitchen girl.