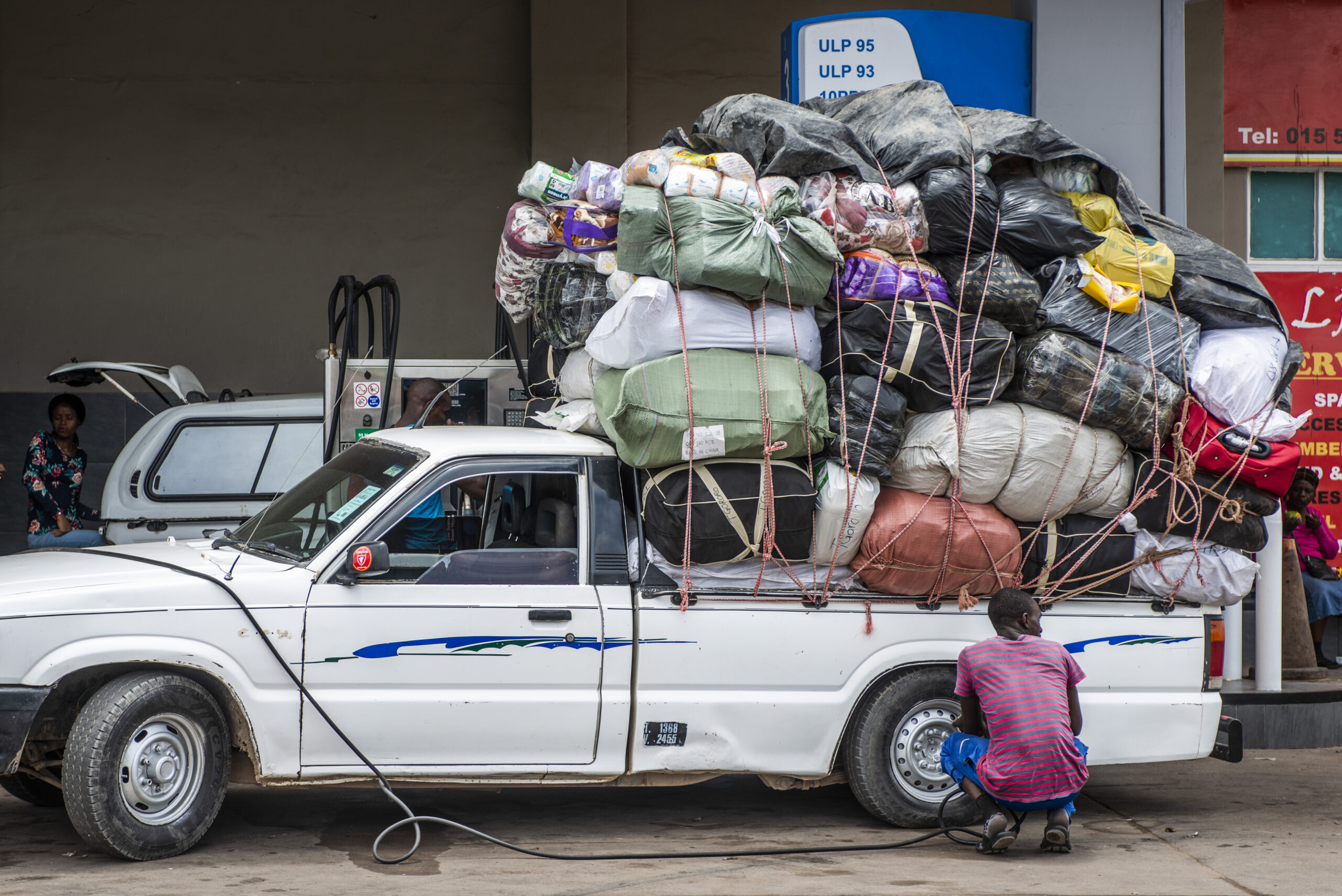 It is raining in Musina in December 2020, days before Christmas. The showers hail the end of a devastating drought. The landscape is green and lush, the baobabs clearly enjoying this burst of life.

But that other drought, the economic barrenness of Zimbabwe, is far from gone.

Border towns everywhere share their peculiar dynamics. Whether it’s El Chuy in Uruguay, Trabzon in Turkey or Musina in Limpopo.

Sure, each has its own flavour. The endless bazaars in Trabzon, with that medieval Silk Route vibe — though nowadays most of the stalls sell fake Nikes. The simple truth in El Chuy, where the main road through the city is the border. Depending on the exchange rate and economic conditions, one sidewalk flourishes while the other withers. The goods are mostly expensive whiskey, electronics and perfumes.

The common theme for these cities is that they depend on some form of imbalance. One side has more of this, and the other has more of that. That’s where the magic happens  —  the magic of trade.

Trade stripped to its essentials. Buy to sell. Make money. Buy more. Sell more. The most basic of economic equations: buy for less, sell for more. And, as in any economic equation, there is risk.

In Musina, everything is geared to supplying neighbouring Zimbabwe with essential goods. The main road through town is the N1 itself.

The city centre is filled with all forms of trade. Bulk, wholesale, retail. And from there even smaller, to individuals carrying bags and buckets.

Bakkies, taxis and trailers, loaded way more than you would have thought possible, with anything from furniture, fridges, TVs, bicycles, buckets, potatoes, old rusty chicken mesh to even those tubes of brandless NikNak-type chips.

Shops owned by South Africans, Somalis, Pakistanis and Indians cater to an endless stream of shoppers from “the other side”.

Everything on sale in Musina finds its way to the busiest border of Africa, 14km up north.

The Beitbridge border post connects South Africa with Zimbabwe, Malawi, Zambia, Democratic Republic of Congo and northern Mozambique. Most of the goods that come from or through South Africa to surrounding countries pass here. Whenever the millions of Zimbabweans who live and work in South Africa want to go home, they also pass here. And then there are the traders who perpetually buy in Musina to supply the Zimbabwean consumer.

Takawera is driving his truck from Johannesburg to Harare. This time, his load consists of piping for the mines, some kind of cables, and toilet seats.

Zimbabwe may be poor and corrupt, but trade doesn’t stop. Says Takawera: “Our trucks are never empty.”

His truck is his home. A comfortable bed behind the driver’s seat, a cooler box and a gas burner. And a chess board to kill the long wait at the border.

At the last padstal before Musina, Takawera buys meat and sausages. “I’m probably going to take three, four days in the queue. I need to be prepared. The pap I cook myself.”

“Border-borders” drive people to and from the border. They have carved out a parallel road on the gravel next to the highway. By now, the border is so congested that the closest they can get is the weighbridge. The last 4km you walk.

The queue of trucks is an ecosystem in itself. Movement is scarce. Every 20 minutes or so, it may move for 50m. Families are “camping” on the shadow side of taxis; cooking food, changing nappies. Drivers are napping in or under their trucks. Salesmen are offering their wares. Gunshots remind everyone of preying tsotsis, this time apparently on a group of women relieving themselves in the bushes.

And then of course the occasional overheated car, broken down truck and fender-bender,   the exciting moments when someone tries to switch lanes — and all the complications that go with it. Trucks manoeuvre with millimetric precision.

A man had some kind of fit in the scorching heat. He is lying next to the road, foam coming out of his mouth. Some guys have taken off his shoes, another is throwing water on his chest. He seems to be breathing. We all walk on.

There are various projects to improve the flow of traffic. The foundations for a ring road around Musina are eagerly waiting for further construction. For now, locals have brought the project to a standstill.

Then there is that more ambitious project by public private partnership Zimborders Mauritius.  Banking on the prospects of the African Continental Free Trade Area, the project aims to modernise both sides of the border in a record time of 24 months. Backed by R4.5-billion from private equity funds Harith and Pembani Remgro, this project promises to improve infrastructure, and bring in the latest technologies to speed up the inspection and clearing of cargo.

But right now, the queue is not moving. It’s a gridlock. The traffic to Zimbabwe takes most lanes of the highway —  of both directions. The trucks and cars that have managed to come into South Africa —  after a nine-day wait on that side —  get stuck on this side because they can’t move through the oncoming flow of vehicles.

Traffic signs seem nonsensical: “Don’t Stop — High Crime Area”, “Slow Down — Stop Ahead”. A brave robot insists on jumping from red to green and back to orange.

As packed as it is, officials still find ways to clear up space for their “preferential customers”, moving them ahead so they can knock off a day or two from their wait.

Takawera observes it with resignation: “Everyone is chowing. The cops chow, customs chow. Those Covid tests also must have somebody chowing.”

Just before the border, the clearing agents run their businesses from a complex of small buildings and fitted shipping containers.

They walk to and from customs with stacks of paper, crossing a large parking lot with trucks coming from Zimbabwe, waiting to be cleared.

No movement here either.

On the far fence of this parking lot, two young men sit under a makeshift shade roof. An opening part of the fence is held closed with chains.

Every few minutes, a group of people comes either from the bush behind the fence — to enter, or through the parking lot — to exit. The people coming from the Zimbabwe side carry empty gallons and bags. The people going to Zimbabwe have the gallons loaded with petrol, and carry bags and buckets filled with wares.

Thumelo stands up from his old car seat under the shade. He haggles with the leader of the group. R10 a person, charged by the owner of the parking lot.

I ask Thumelo if he feels like an alternative border guard. He laughs, for the first time. For his clients he has perfected the grumpiness and why-are-you-bothering-me attitude of any other border guard in the world.

The bush and the river behind the fence are filled with danger. From border patrol to robbers to crocodiles. And then the increasing prices along the way. The guides may decide that additional payments are needed. There are plenty of reports of people being robbed and women being raped, by bandits and military patrol guards.

People risk their lives for the most basic commodities. Some women come every day to stock up their spaza shops. The path to the river leads past a military base. Everyone is aware of what is happening. To cross the river, people climb over the old bridge — in plain sight. A ladder leads up the pillar of the bridge.

The cost of doing business here is high. Every step of the way there are fees to pay; to Thumelo at the gate, to the guide, to the carriers; to those wanting bribes. There is the cost of wares being stolen or confiscated. The products are often bought at retail price.

But, it seems to make economic sense in this twisted reality.

Imagine a country that doesn’t produce — not even NikNaks. Where does it get the money to buy goods? Isn’t it somehow ironic that the billions of rands sent home by Zimbabweans working in South Africa are mostly spent on buying goods from our country?

Watching all this is a classic lesson in economic resilience. Just like water, trade will find a way. It will wear out the rock to make a stream through the poverty, the corruption, the risks.

In this light, Public Works Minister Patricia de Lille’s debacle over the R40-million blown on what was to be a 37km border fence is not only a tale of bad procurement and management. Much more than that, it shows the fallacy of ideas. The economic pressure from bankrupt Zimbabwe cannot be stopped by wire mesh.

At the border, the mobile Covid-19 testing clinic has two people trying to test hundreds of travellers. This is not really a queue but rather a small multitude where everyone tries to push themselves forward. If anything, it seems like a perfect superspreader situation.

By now, the queue has grown to 16km, starting before Musina. Many of the people here will spend their Christmas in it. A woman has died. Rumours of dead truck drivers persist.

As I walk back from the border, there is movement. A 16km snake of vehicles sets into motion. Drivers are hooting. People are clambering from under trucks, grabbing their belongings, jumping into their vehicles. The queue is rapidly reorganising itself, filling up new available space. Suddenly there is life, sound and movement.

Africa is resilient and energetic. Even when all we see is stagnation, we are always ready to spring into action at the first opportunity.