A rebel without a satellite dish: Decoding the recent Steve Hofmeyr saga 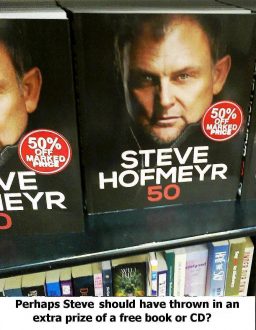 This kind of braai did not appeal to me, to be honest. In the first place, I wasn’t sure how tasty it will be. I wouldn’t be able to chew on a well-done decoder even if you added lots and lots of chili-sous.

On the other hand, a satellite dish has creative culinary potential. Could it be used as a wok? Hmm. Then again, buying a real wok would be much cheaper than destroying a satellite dish…

To think that all this madness started with a corporate decision.

The decision by the Multichoice Group to ban all footage of Steve Hofmeyr from DSTV.

They had their reasons. Steve Hofmeyr was the author of horrible tweets and his viewpoints were offensive. It is therefore the right of any private company or group to distance themselves from all the kak this guy has been talking. This is not the first time MultiChoice has tried to do the right thing; after all, they kicked out ANN7 en al daai “white monopoly capital” nonsense and replaced them, without much a media brouhaha, with the truly competent, 100% black-owned Newzroom AfriKa.

I’m really impressed with this news channel, by the way. Their coverage is professional, slick, and visually attractive. To quote from the Twitter account of one of their contributors, Karyn Maughan:

“There is nothing more threatening to white fragility than black excellence that does not seek, want or need its approval.”

(She actually said this in reference to Caster Semenya, but it could just as well be applicable to Newzroom Afrika.)

What a pity that the Steve Hofmeyr supporters who joined him in cancelling their DSTV subscriptions will now forever be excluded from watching Newzroom Afrika.

They might not be particularly interested in an excellent and reasonably objective news channel, though. After all, most of the news about the New South Africa is bad. Who wants to hear about corruption, crime, potholes and marches? Isn’t it better to go back to pre-democracy South Africa and pretend it’s still 1985?

But there’s a snag, though.

These same okes are the okes who will be absolutely devastated and heartbroken the day they wake up to realise that they are now forever excluded from watching future Springbok internationals in the comfort of their own homes.

I can see it happening already: the first thing the guy who wins that R10 000 prize will do on the first of June, is go and spend the money on a new MultiChoice subscription, so as not to miss the 2019 Rugby World Cup in September…

Perhaps, with the R10 000 prize, Steve should have thrown in an extra prize of a free book or CD. Then, at least the winner of the R10 000 prize would feel that he has received something of lasting value. I suspect Steve has a lot of copies left of that famous picture book with photographs of himself he published to commemorate his fiftieth birthday a few years go, the one that apparently sold so badly that the bookstores had to mark it down.

To be honest, the decision by the Multichoice Group to ban Steve’s face from all their channels was a bit heavy-handed. It was like shooting a muggie with a voorlaaier. Before this saga, people were just about to forget all about Steve Hofmeyr. He wasn’t on TV all that much, either. It’s been a while since Agter Elke Man was hot news…

Personally, I haven’t seen any footage of Steve Hofmeyr on TV for quite a few years. Then again, I might not be the right person to comment on this. Most of the time I only watch Judge Judy and House Hunters International. So unless Steve somehow got sued by an ex-flatmate for repaying a loan he received for taking over the payments on a used truck, or unless he and his family decided to relocate to Trinidad (in an apartment close to the beach and also not too far from public transport, and with lots of natural light), I was unlikely to ever see his face on my telly.

As things stand, I won’t see him anyway. None of us will. The axe had fallen. The judgment has been delivered. The wrath of the media giants has come down on Steve’s head like a lorry-load of substandard coal being dumped in the backyard of a decommissioned Eskom substation.

Of course, Steve himself started this whole debacle when, years ago, in the seizure of what could only have been an extreme proverbial “blonde oomblik”, he remarked on Twitter that “blacks are the architects of apartheid”.

What on earth Steve meant by that statement is not entirely clear at all. It was like saying that the Jews had planned the Holocaust.

Now, it’s all very well for the pro-Steve club to carry on about “freedom of speech” and everyone’s “right to have an opinion”, and if that was the only issue here we would all have fully supported them, but what’s the point in defending an opinion if no-one understands that opinion?

If Steve had tweeted “the earth is flat” or “Bronkhorstspruit is the capital of Kazakhstan”, would anyone have defended his right to freedom of speech so vehemently? Would anyone even have noticed such a faux pas? It would have evoked a few chuckles, that’s all.

Point is, Steve uttered these nonsensical, incomprehensible words with the sombre seriousness of somebody erecting a statue of Baal in the middle of Jerusalem during the time of the Israel prophets. One can almost hear him utter the words “blacks are the architects of apartheid” in his husky monotone mumble:

OK, that doesn’t turn me on, definitely not in a sexual way, never mind how Big 7 Media sees it, and personally I much prefer Charlize Theron’s Afrikaans accent to Steve’s accent, her child-rearing prowess or lack of prowess aside, but what I’m trying to get at with this piece is simply this:

By making this decision, MultiChoice may have inadvertently awakened a sleeping boerboel in the hearts of the Afrikaner nation.

This is war. This is Steve and his handful of die-hard friends pitted against the entire era of modernity. This is like travelling back in time all the way to the time of oranje-blanje-blou, diensplig, Springbok Radio, and songs like “braaivleis, rugby, sonneskyn en Chevrolet”.

Instead of leading an authentic rebellion, instead of trying to persuade his followers to face the numerous challenges and the vast problems of this emerging new South African society head-on, instead of urging them to help make a difference, Steve has opted to advise them to escape into an imaginary world, world which existed decades ago, a world which is no longer real.

All this could have been avoided. If only he’d admit that one tweet was a terrible mistake.

It’s okay to hold neo-conservative views. We live in a time when liberalism ideas are being swept aside. Brexit, Jordan B. Petersen and, yes, believe it or not, even Afri-Forum are all part of the sincere attempts to swing back the pendulum from the madness and the hypocrisy and the drone killings and the economic decay of the wishy-washy dishonesty of the Obama era and the European Union and to bring back some of the old values. I don’t always like the way they do it, but at least I feel as if can talk to people who hold such views. Me and Kallie Kriel are sending each other private messages on Twitter all the time! (Well, that not all the time, and most of the time we just send each other pictures of our dogs, but at least we’re friendly with each other.)

The concerns of these people are well-founded, and their views are valid. They may be on the opposite side of the spectrum of the values I believe in, but I accept them as an integral and necessary part of the twenty-first century landscape of ideas. Jean-Jacques Rousseau and all that.

Maybe it’s just me, but I fail to see how turning your satellite dish into a wok is going to help save the SOEs, stop farm murders, prevent crimes against women and children, root out corruption, eradicate revolutionary ideologies, build the economy, or create a common modern South African identity.

They are not actually doing anything praiseworthy. They have decided to simply travel back into the past with Steve. Like him, they are yesterday’s heroes. They are rebels without a cause. Or rebels without satellite dishes.

At least they will still be able to braai. Once they have managed to clean their Webbers from the residue of melted plastic.

And, lucky for them (unless load-shedding gets completely out of hand) they will still have 7de Laan.

“What’s in a name?” Shakespeare asked in his day. You may find Koos Kombuis, also known as Joe Kitchen, pondering this question over a few glasses. This versatile artist is causing quite a stir, this time as a bilingual writer of children’s books who, at the same time, introduces another nom de plume, Joe Kitchen. André Letoit is not an unfamiliar name, but his readers and music fans know him as Koos Kombuis. Initially he considered reverting back to André Letoit, but then he saw the persona that Willim Welsyn constructed for his English CDs: William Welfare. It was such a straightforward and obvious solution. “The penny finally dropped when my children’s favourite teacher, Rob Moll (to whom the new books are dedicated) at Somerset West Private School, introduced me one evening at a school function as ‘Jacob Kitchen’. From there it transformed to ‘Jack Kitchen’, but then I realised there is such a guy in America, and I didn’t want to intrude on his space, so eventually I became ‘Joe Kitchen’.” Other writers may be apprehensive about arbitrarily changing the name they publish under. It is, after all, no easy task to establish a name in the book trade. Not Koos. “I’m not worried that readers will be scared away,” he says. “Especially because the book is published at the same time in Afrikaans under ‘Koos Kombuis’.” “I’m exactly the same guy as Koos Kombuis,” he muses. “But Koos drinks red wine, Joe prefers Sauvignon blanc. Koos drinks coffee, Joe tea. Koos listens to Jack Parow and Fokofpolisiekar, Joe likes the Bottomless Coffee Band and Robin Auld.” The books, titled Hubert the Useless Unicorn and Eben die Ellendige Eenhoring, are published by Naledi. They will hit the shelves in April and will also be available from Naledi’s website ( www.naledi.online ). These children’s books are cheerfully illustrated by Koos and are undoubtedly a horse of another colour, but stay true to his informal, accessible style.