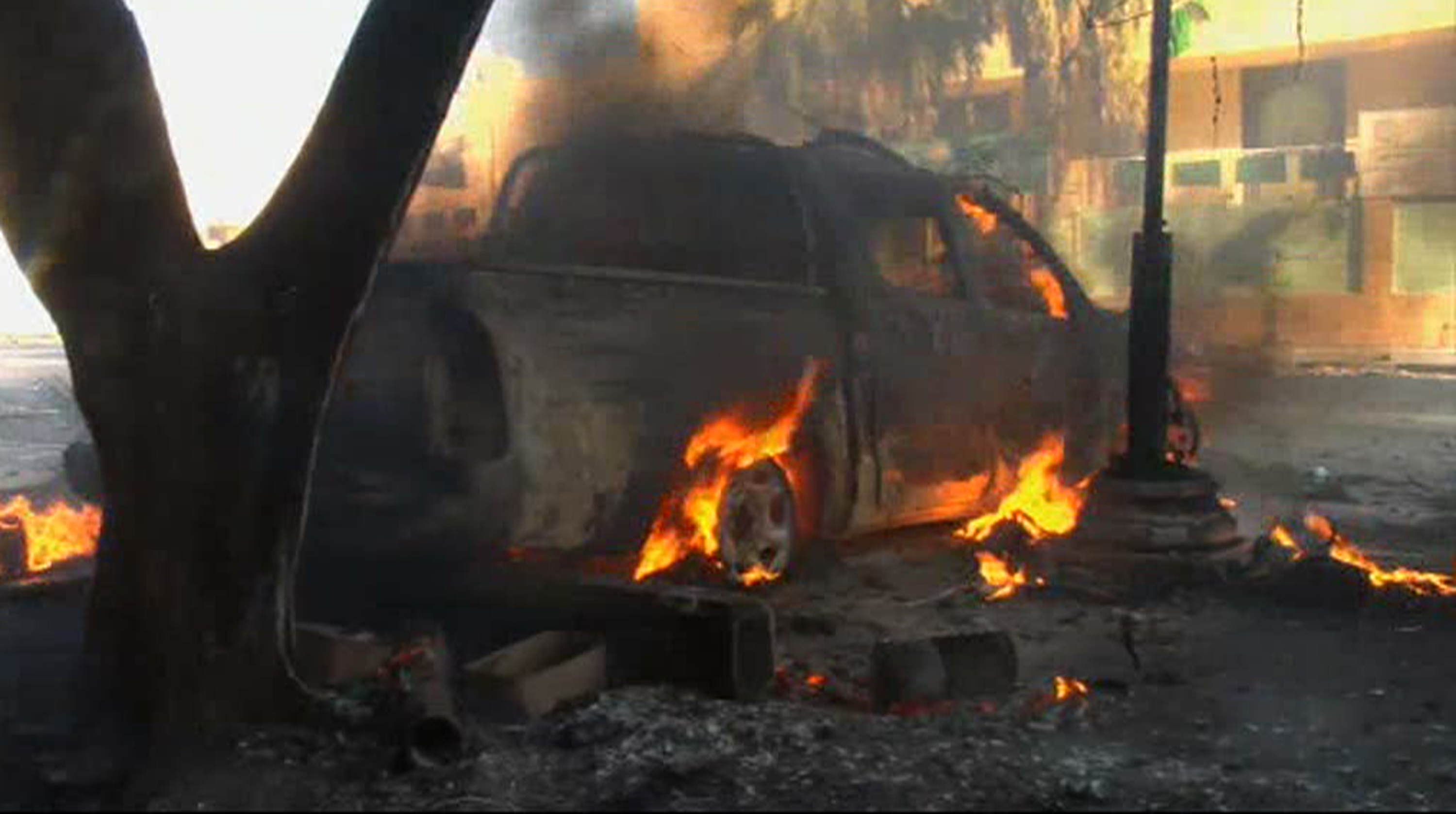 The brigade for boiling and burning blacks

By Khadija Magardie on 9 September 2011

And also unlike Jefferson’s dictum, it isn’t just occasionally, but has been going on for months.

The vigilantes have even given themselves a name “The Brigade for Purging Slaves and Black Skin”; scrawling their grim calling card across walls in the cities they pass through. Like typical criminals for whom voyeurism is part of the thrill, they’ve been filming their activities, including public hangings, beheadings and torture.

Oddly, the corralling of hundreds of black men, and the bashing in of the skulls of others — solely because they are black, isn’t being met with much of an outrage.

Those being held in feedlots and abandoned schools as they await their fate, are among the lucky ones. Though no functioning legal system exists to try them — at least they’re still alive. Which counts for a lot in a part of the world where the word “black” and “slave” are comfortably synonymous in the dominant language.

And as they’re paraded before the international media, in the corner is a pile of “African” necklaces, amulets and beads; “evidence” of their nefarious crimes. Witchcraft, predictably, has also been mentioned.

Those who’ve managed to evade the long arm of The Brigade have taken to hiding in abandoned shipyards — all the while sending out frantic SOSs to their home countries to rescue them.

These scenes, less Dickensian than they are straight out of the Dark Ages — sum up, more or less, the pathetic plight of hundreds, possibly even thousands of blacks in Libya — as the revolution steams ahead.

And as the media, and Western Europe’s love-fest with the Libyan rebels continues apace, nobody is saying much. Except maybe, in a shocking inversion of empathy, suggesting that all revolutions have their excesses.

This view obviously has historical precedent.

As one genocide authority told a German magazine reporting on what it calls the pogroms against blacks in revolutionary Libya, it was “standard knowledge” that minorities come under attack in civil wars, “because at least one party to the conflict accuses them of collaborating with the enemy”.

Reading this, one would be forgiven for assuming this was a bunch of nappy-haired Bayaka (Pygmies) stuck in Vladivostok. But they’re Africans. Being decapitated, bashed and burned — in Africa. The foot soldiers of “The Brigade for Purging Slaves and Black Skin” are Arabs, and Muslim.

Were the shoe on the other foot and the blacks the aggressors, airlifts would have been organised, and weapons handed out by the Arab League.

And if the rebels were white, or, better yet, of the ranks of that old Middle East scapegoat — the Jews — marches would be held, pamphlets strewn and frantic petitions long emailed to The Hague.

But they’ve already been designated the good guys, fighting the good fight. So who cares if there’s some collateral damage? And all the while, the world does, and says, nothing.

International rights organisations, usually quick to weigh in on similar debates, (and particularly quick when it came to Colonel Gaddafi and his henchmen) have only lately begun expressing “concern”. Perhaps their fax machines weren’t working. Now they say there’s a potential for serious abuse of blacks by the Libyan rebels.

They’re urging the new bosses of Libya to do more to protect black Libyans, amid reports that members of one black tribe (and they are many) were being rounded up and lashed with whips (image sound familiar?) — or for “simply vanishing” after being taken from hospitals by revolutionaries.

Amnesty International’s response would be admirable if it had come in time. Like, say, in July, when the Wall Street Journal reported on the dangers facing the Tawergha tribe from the Libyan rebels.

Clearly then, these are no excesses, but a deliberate campaign by the likes of The Brigade to get rid of not just “foreign” blacks in the country as workers or mercenaries, but their own, home-grown ones.

As those who have had experience being black in the Middle East will know, sometimes you don’t need an excuse like a revolution to treat a black like a “abd” or Kushi (Kushite).

Particularly deafening is the silence from other African countries, except maybe Ghana.

The African Union has weighed in only half-heartedly and is more concerned with moral posturing on diplomatic double standards.

Then there is the predictable silence of the Muslim world (including from Libya’s black Muslim neighbours like the Sudan, Senegal, Mali and the like) who consider Libya, both before and after Gaddafi, to be “one of us”.

In no small part due to the efforts of their US-based PR agencies, the Libyan rebels have convinced the media they are the good guys — to the extent that most reports contain disclaimers that there is no credible evidence of rebel atrocities against blacks inside Libya.

Whoever is looking hasn’t been online much where they would find a range of sites stacked with what they call rebel atrocity videos, like the ones archived on this site.

To frame the narrative, as some have done, as though these “Africans” are somehow out of place in Libya is disingenuous. It is after all an African country itself, with a substantial black population, like its neighbours.

One earnest journalist doing a live report gestured to the pile of black bodies killed by the rebels for being alleged mercenaries, remarked, matter of factly to the camera that they “appeared to be African”. A stunning observation, given that he, like Libya — was in fact, in Africa.

It would be interesting to see if the Libyan rebels will be held up to the same standard as the likes of the rebel fighters of Alassane Ouattara — who have been accused of war crimes during the battle to oust Laurent Gbagbo in the Ivory Coast earlier this year.

If not, one may only conclude that in the desperate bid to be “on the right side of history”, and Libyan revolutionary largesse — black life, and in particular, black migrant worker life, has been sacrificed for the higher ideal: democracy.

Where is Luis Moreno-Ocampo now?

Media Strategist and Communications Consultant. Former journalist gone to The Dark Side @dijamagardie