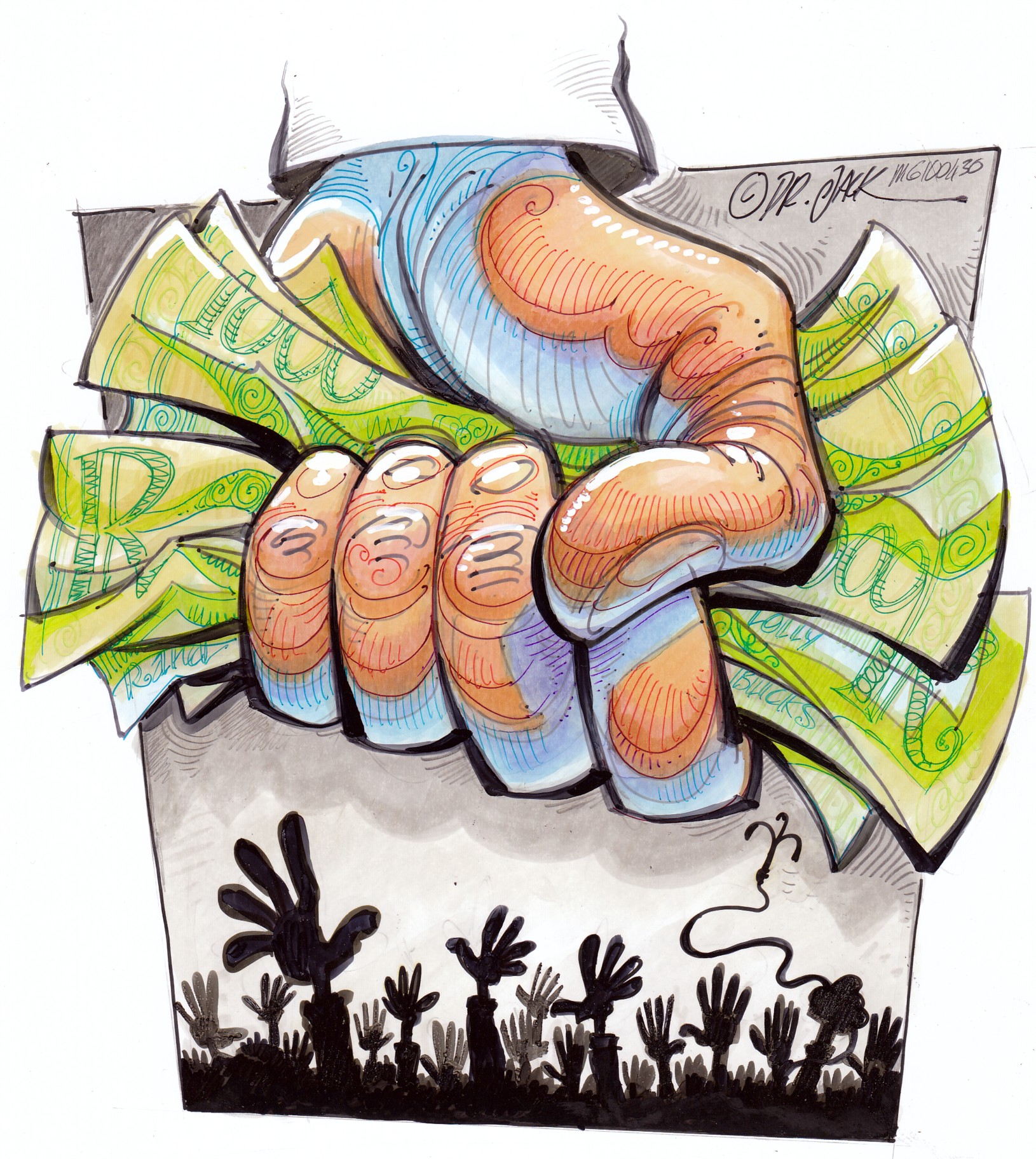 The received wisdom comes to us from every direction: poverty rates are declining and extreme poverty will soon be eradicated from the face of the earth. This narrative is delivered by the World Bank, the governments of rich countries, and – most importantly – the UN Millennium Development campaign. Relax, they tell us. The world is getting better, thanks to the spread of free market capitalism and western aid. Development is working, and soon, one day in the very near future, poverty will be no more.

It’s a comforting story, but unfortunately it’s just not true. Poverty is not disappearing as quickly as they say. In fact, according to some measures, poverty has been getting significantly worse. If we are to be serious about eradicating poverty, we need to cut through the sugar-coating and face up to some hard facts.

False accounting
The most powerful expression of the poverty-reduction narrative comes from the Millennium Development campaign. Building on the Millennium Declaration of 2000, the campaign’s main goal has been to cut global poverty in half by 2015 – an objective that it proudly claims to have achieved ahead of schedule. But if we look beyond the celebratory rhetoric, it becomes clear that this claim is deeply misleading.

The world’s governments first pledged to end extreme poverty during the World Food Summit in Rome in 1996. They committed to reducing the number of undernourished people by half before 2015, which, given the population at the time, meant cutting the poverty headcount by 836 million. Many critics claimed that this goal was inadequate given that, with the right redistributive policies, extreme poverty could be ended much more quickly.

But instead of making the goal more robust, global leaders surreptitiously diluted it. Yale professor and development watchdog Thomas Pogge points out that when the Millennium Declaration was signed, the goal was rewritten, as MDG-1, to halve the proportion of the world’s people living on less than a dollar a day. By altering the focus to income levels and switching from absolute numbers to proportions, the target became much easier to achieve. Given the rate of population growth, the new goal was effectively shrunk by 167 million. And that was just the beginning.

After the UN General Assembly adopted MDG-1, the goal was diluted two more times. First, they changed it from halving the proportion of impoverished people in the world to halving the proportion in only developing countries, thus taking advantage of an even faster-growing demographic denominator. Second, they moved the starting point of analysis from 2000 back to 1990, thus retroactively claiming all of the poverty reduction accomplished by China during the 1990s, which had nothing at all to do with the Millennium campaign.

This statistical sleight-of-hand shrunk the target by a further 324 million. So what started as a goal to reduce the poverty headcount by 836 million has magically become only 345 million – less than half the original number. Having dramatically redefined the goal, the Millennium campaign can claim that poverty has been halved when in fact it has not. The triumphalist narrative rests on an illusion of deceitful accounting.

Poor numbers
But there’s more. Not only have the goalposts been shifted, the definition of poverty itself has been massaged in a way that serves the poverty-reduction narrative. What counts as poverty – the “poverty line” – is normally calculated by each nation, and is supposed to reflect what an average human adult needs to subsist. In 1990, Martin Ravallion, an Australian economist at the World Bank, noticed that the poverty lines of a few of the world’s poorest countries clustered about $1 a day. On Ravallion’s recommendation, the World Bank adopted this as the first-ever International Poverty Line (IPL).

But the IPL proved to be somewhat troublesome. Using this line, the World Bank announced in its 2000 annual report that “the absolute number of those living on $1 a day or less continues to increase. The worldwide total rose from 1.2 billion in 1987 to 1.5 billion today and, if recent trends persist, will reach 1.9 billion by 2015.” This was alarming news, especially because it suggested that the free-market reforms imposed by the World Bank and the IMF on global South countries during the 1980s and 1990s in the name of “development” were actually making things worse.

This amounted to a PR nightmare for the World Bank. Not long after the report was released, however, their story changed dramatically and they announced the exact opposite news: while poverty had been increasing steadily for some two centuries, they said, the introduction of free-market policies had actually reduced the number of impoverished people by 400 million between 1981 and 2001.

This new story was possible because the Bank shifted the IPL from the original $1.02 (at 1985 PPP) to $1.08 (at 1993 PPP), which, given inflation, was lower in real terms. With this tiny change – a flick of an economist’s wrist – the world was magically getting better, and the Bank’s PR problem was instantly averted. This new IPL is the one that the Millennium campaign chose to use.

The IPL was changed a second time in 2008, to $1.25 (at 2005 PPP). And once again the story improved overnight. The $1.08 IPL made it seem as though the poverty headcount had been reduced by 316 million people between 1990 and 2005. But the new IPL – even lower than the last, in real terms – inflated the number to 437 million, creating the illusion that an additional 121 million souls had been “saved” from the jaws of debilitating poverty. Not surprisingly, the Millennium campaign adopted the new IPL, which allowed it to claim yet further chimerical gains.

A more honest view of poverty
We need to seriously rethink these poverty measurements. The dollar-a-day IPL is based on the national poverty lines of the 15 poorest countries, but these lines provide a poor foundation given that many are set by bureaucrats with very little data. More importantly, they tell us nothing about what poverty is like in better-off countries. A 1990 survey in Sri Lanka found that 35% of the population fell under the national poverty line. But the World Bank, using the IPL, reported only 4% in the same year. In other words, the IPL makes poverty seem much less serious than it is.

The present IPL theoretically reflects what $1.25 could buy in the United States in 2005. But people who live in the US know it is impossible to survive on this amount. The prospect is laughable. In fact, the US government itself calculated that in 2005 the average person needed at least $4.58 a day simply in order to meet minimum nutritional requirements. The same story can be told in many other countries, where a dollar a day is inadequate for human existence. In India, for example, children living just above the IPL still have a 60% chance of being malnourished.

According to Peter Edwards of Newcastle University, if people are to achieve normal life expectancy they need roughly double the current IPL, or a minimum of $2.50 a day. But adopting this higher line would seriously undermine the poverty-reduction narrative. An IPL of $2.50 shows a poverty headcount of about 3.1 billion, almost triple what the World Bank and the Millennium campaign would have us believe. It also shows that poverty is getting worse, not better, with 353 million more people impoverished today than in 1981. And if we take China out of the equation, that number goes up to 852 million.

Some economists go further and advocate for an IPL of $5 or even $10 – the upper boundary suggested by the World Bank. At this line, we see that some 5.1 billion people – nearly 80% of the world’s population – live in poverty today. And the number is rising.

These more accurate lines suggest that the story of global poverty is much worse than the spin-doctored versions we are accustomed to hearing. The $1.25 line is absurdly low, but it remains in favour because it is the only line that shows any progress against poverty, and therefore justifies the present economic order. Every other line tells the opposite story. In fact, even the $1.25 line shows that, minus China, the poverty headcount is getting worse, with 108 million people added to the ranks of the poor since 1981. All of this calls the triumphalist narrative into question.

A call for change
This is important right now because the UN is currently negotiating the new Sustainable Development Goals (SDG) that will replace the Millennium campaign in 2015, and they are set to use the same dishonest poverty measures as before. They will leverage the “poverty-reduction” story to argue for business as usual: stick with the status quo and things will keep getting better. We need to demand more. If the SDGs are to have any real value, they need to begin with a more honest poverty line – at least $2.50 a day – and instate rules to preclude the kind of deceit that the World Bank and the Millennium campaign have practiced to date.

Eradicating poverty in this more meaningful sense will require more than just using aid to tinker around the edges of the problem. It will require changing the rules of the global economy to make it fairer for the world’s majority. Rich country governments will resist such changes with all their might. But epic problems require courageous solutions, and, with 2015 fast approaching, the moment to act is now.

Having spent the first half of his life in Swaziland, Jason earned a doctorate at the University of Virginia and now holds a fellowship at the London School of Economics. His research focuses on development, globalisation and labor, with an emphasis on Southern Africa. He lives in constant fear of being sniffed out for his counter-revolutionary penchant for bourgeois wine and jazz. Follow him on Twitter @jasonhickel.