Fear and loathing at ESPN 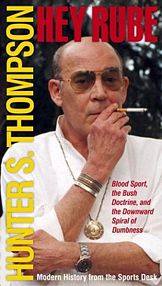 Ever since I devoured Fear and Loathing in Las Vegas on a plane ride between Perth and Melbourne in Australia and followed that up with a couple of reads of The Great Shark Hunt, I have been a Hunter S Thompson fan.

Having read almost everything he has had published, I was relieved to find a copy of a new collection of his writings the other day at Bookdealers in Rosebank Mall.

Hey Rube: Blood Sport, the Bush Doctrine, and the Downward Spiral of Dumbness — Modern History from the Sports Desk is a collection of Thompson’s columns for ESPN.com published in 2004 a year before Dr Gonzo decided to end his own life.

Thompson’s column Hey Rube ran from 2000 till shortly before his death in 2005 and it is the first few years that are collected in this book.

Ultimately this book is as much about American politics and society as it is about sport, and all the better for it. Here is a taste.

“Let’s face it: the only true blood sport in this country is high-end politics. You can dabble in sports or the stock markets, but when you start lusting after the White House, the joke is over. These are the real gamblers, & there is nothing they don’t want to win. Nothing involving jockstraps or sports bras will ever come close to it for drama, violence, savagery, & overwhelming lust for the spoils of victory … The Presidency of the United States is the richest & most powerful prize in the history of the world. The difference between winning the Super Bowl & winning the White House is the difference between a Goldfish & a vault of gold bars.” — From “The White House disease”

Politicians are not his only targets, though: “… I have described them [sports writers] as “a rude and brainless subculture of fascist drunks” and “a gang of vicious monkeys jacking off in a zoo cage” and “more disgusting by nature than maggots oozing out of the carcass of a dead animal” From “The White House disease”

I have to admit that I am only halfway through it as I write this, but this collection is an absolute page-turner and it has brightened up my life.

A substantial number of these columns are actually archived on ESPN.com, so you can head over here to read them, if you don’t want to purchase a copy of this great book.

One of my favourites is a column called “The curse of Musburger”. Go here to read it.

Otherwise, if you are looking for more info on the book, here is the Wikipedia page.

Published in News/Politics and Sport

Lloyd Gedye is a journalist at the Mail & Guardian who tends to focus on business matters and music in that order. When he wasn't allowed to include his music blog [www.isolation.tv] in Thought Leader, he decided he'll just have to start writing about sport.