Those not swept up in the frenzy reacted with a certain bemusement. After all, it’s not as though S&M porn has been in any way inaccessible up to now. There must be enough S&M fiction on the internet to keep the most hardened enthusiast reading until the end of time. The appeal of the “50 Shades” series must therefore lie somewhere else. Just as with Mills & Boon, it may well lie in that framing romantic narrative, rather than the sex itself. Christian Grey and Anastasia Steele end up happily married and having kids, and the trilogy is as much about their emotional relationship as it is about their kinky bedroom antics.

Never ones to let the grass grow under their feet, Mills & Boon have launched their own “12 Shades” series about couples who are into a little light bondage and discipline. The name is so clearly an echo of “50 Shades” that one can imagine EL James investigating her legal options right about now.

For a while in the 1980s and 1990s, women’s romantic fiction was all about equality and right-on feminism. The hero and heroine were quite likely to be colleagues – possibly in their early 30s, and most certainly not virgins – who battled each other in the boardroom and made up in the bedroom. These equality narratives quickly fell out of favour and the noughties were marked by a return to dominant-male, submissive-female narratives.

The hero was most likely to be an Arab sheikh or Sicilian billionaire, at least 10 years older than the virgin-ingénue heroine who finally tames him. The sex scenes skirted very close to rape fantasies and were certainly not a meeting of equals.

The “50 Shades” trilogy can be seen as the natural extension of this trend. Christian Grey dominates Ana Steele in daily life as well as in the bedroom. He kicks up a huge fuss about her using her maiden name professionally, and forces her to have an elective Caesarean section with their second child. She makes a show of resisting him but ultimately acquiesces.

Unsurprisingly, the “50 Shades” trilogy has been regarded as deeply dubious by feminist commentators. It’s also been slated as appalling rubbish by literary critics. In fact, so much handwringing has ensued about what “50 Shades” really means and what it says about the modern woman, that one is forced to wonder why pornography for men is not subjected to the same microscopic examination.

There is something paternalistic about the notion that women’s erotica must be “well-written” or “send the right message” to women. The implication is that it is necessary to police women’s sexual fantasies as well as every other aspect of their behaviour. It would certainly be refreshing to see erotica for women permitted to flourish without the wagging finger of Big Brother — or indeed Big Sister.

Erotic fiction is nowhere near over as a trend. Publishers remain hungry for stories that cash in on the market unexpectedly opened up by EL James. South African publishers are no exception. Rumour has it that Random House Struik has an exciting new release pending next year called Folly. It will be a witty bondage and discipline novel that tickles women’s funny bones as much as other areas of their anatomy. The publishers are keeping mum on who the author is except to say that she is already well-known on the South African literary scene. Here is a sneak peak at the cover: 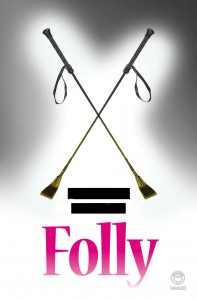