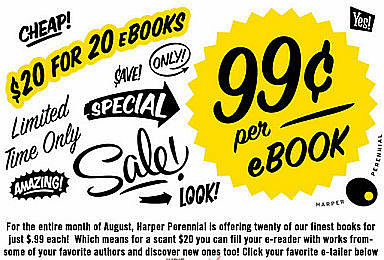 Are paper books the horse and carriage of the 21st century?

There has been a lot of hand-wringing and soul-searching in the book world about the challenges posed by e-books. There is also the separate, but related, matter of the massive, loss-leader discounting that book-store chains practise routinely.

Cheap books and e-books are apparently threatening civilisation as we know it. They are certainly causing the demise of many thousands of independent book stores worldwide. The most pessimistic estimates put the closure of book stores in the US at 25% already.

If this trend seems familiar, that’s because it hit other industries first. In the second half of the 20th century, mom-and-pop grocery stores the world over were forced to close as giant supermarket chains spread their leviathan-like tentacles further and further abroad. They simply couldn’t compete with all the choices offered by the supermarkets, or with the gratifyingly low prices. There may have been some consumers who held out loyally against temptation, but they weren’t numerous enough or dogged enough.

When the first motor cars were introduced in the 1880s, it didn’t seem possible that they would one day replace the horse and carriage. Nay, that in an astonishingly short period of time, they would sweep the horse and carriage into the dustbin of history. Thousands of people lost their livelihoods — from liveried coachmen to the guy who cleaned up the streets after the horses. Hundreds of years’ worth of carefully honed skills became abruptly obsolete. In their place we acquired dangerously fast-moving vehicles that polluted the air and guzzled up the world’s fossil fuel supply. Yet few of us seriously look back on that time with any acute sense of loss. We’re too fond of being able to move from Point A to Point B quickly and efficiently.

So why can we not let independent bookstores go in the same quiet fashion? It probably has to do with the fact that books are not a commodity in the same sense as olive ciabatta and low-fat yoghurt are. They are not so much consumer items as a repository for the whole of human intellectual endeavour across all time and space. There are those who say that to this day we have not regained all the knowledge that was lost when the great library at Alexandria burned down. (Nice one, Julius Caesar. You twit.)

This is the fear that haunts us when people talk about the demise of the book. All that knowledge, all those stories — entire cultures and religions — could be swept away if books ceased to exist. But e-books are not about destroying knowledge, are they? They merely store it in electronic form. So what is really being lost here? People talk about the feel of books, the appearance of books, and (strangely but persistently) the smell of books.

There are many others who cannot relate to this at all. For them, books are all about the content. They don’t care about fonts, jackets or the grade of the paper. And they most certainly don’t care about the smell. All they care about is transferring the words to their brain in as short a time as possible. They’d be perfectly happy never to read another paper book in their lives. I know this because I am one of them. I love my Kindle with a passion that is probably illegal in several US states.

But even I can see that something valuable will be lost if paper books cease to exist altogether. As yet there is no really satisfactory way of browsing through books electronically. Yes, the sellers of e-books bombard you with “suggestions”, but it’s just not the same as browsing from shelf to shelf to see what title or jacket catches your eye. And downloading a free sample is similarly not the same as flipping through a book to see whether it appeals.

Bookstores, especially the independents, are fantastic centres of community learning and uplift. My personal favourite is Love Books in Melville, which hosts an endless round of book launches during the week, and Saturday-morning readings for kids on the weekend. It would be a tremendous pity if these stores simply ceased to exist.

Most distressing of all is the prospect of children in the future growing up in homes without books. Much of our literary education happens through serendipity. It’s boredom that drives you (okay, me) to your parents’ bookshelf one rainy weekend where you happen to pick up a yellowed old paperback of Auntie Mame, thereby precipitating a lifelong infatuation with Patrick Dennis. If all books are to be stored on electronic devices, these serendipitous moments will cease to exist and all of our children’s reading will henceforth be guided by adults – a truly horrible prospect.

In the end, all we can be sure of is that market forces will prevail, as they did in the case of the supermarkets and the automobile. If bookstores and paper books continue to add genuine value to the consumer’s experience, they will be permitted to exist. If they don’t, they too will be consigned to the dustbin of history.