Here, piggy piggy … get your licence!

No one likes to be called names. But let’s face it, when there is a generalised stigma towards a certain group (the metro police, in this case) people often whip out the verbal guns and start shooting. Take a look (with pictures) at one of the reasons why …

When the metro police didn’t exist, the streets of South Africa had become pretty sucky and crime was perceived to be extremely bad as the South African Police Service simply couldn’t handle both jobs simultaneously (it’s pathetic that someone at the top actually thought they could). Perhaps it’s the same oke I should be taking my hat off to for finally implementing the metro police — a force with the purpose of managing the streets for the better of society. Or so they say.

But is this really being achieved? There have been hundreds of articles and debates following the corruption of the metro police: the way they take bribes, have no sympathy and literally put fear into the hearts of the very people they are supposed to be protecting (I for one clench and skip a heartbeat every time I see a blerring white-and-orange car).

On the flip side, I have experienced some very nice, down-to-earth traffic officials. Just two weeks ago I was pulled over from the opposite side of the road. The cop saw my paper number plate and realised why I never had my number plates on the vehicle. I respected him for doing his job as he was polite and even started up a bit of friendly conversation before he sent me on my way.

I’ve also encountered sympathy from the metro police one time when I failed to yield completely at a dead intersection without wearing my seatbelt and chatting on my cellphone. After pleading for some time I was let go with a slap on the wrist, and since then I’ve worn my seatbelt religiously. My cellphone, however, still comes out every now and then, which I’m not proud of — but hey, we’re all human, right?!

So we’ve got the good cops and the bad cops and a generalised hatred for all cops. I don’t think it comes down to apathy and I didn’t think we had a genuine reason to hate the metro police. Let’s face it, people who cry about the fact that they take bribes are probably guilty of giving one out themselves. Be real: R50 and an hour of ethical guilt is better than R500 and an inconvenient drive to the traffic department.

BUT
One thing I simply can not stand about the metro police is the way they drive. This to me is unacceptable on every level! I stay over at my girlfriend’s practically every night, and next door to her lives a tow-truck driver who seems to have a metro police towing contract of some kind. Without fail I see a completely totalled metro car every single day! 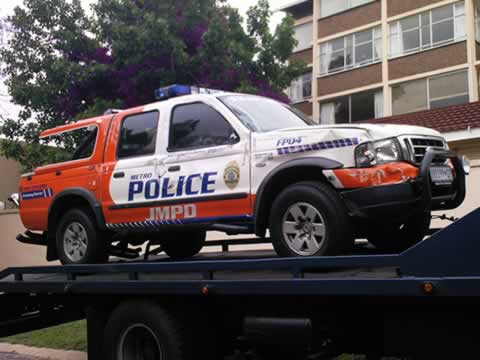 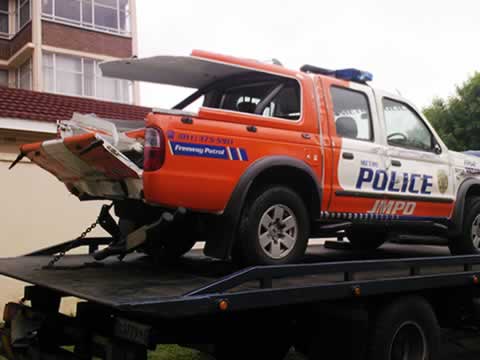 Now it’s understandable that accidents happen. but how on earth do you roll a 4×4 highway patrol vehicle? How to you completely maul and rip off the bumper of a Ford Focus unless you’re a complete idiot? How do you manage to annihilate a brand new Golf V GTI that costs more than R300 000? Especially when you are a metro police officer?!

Do these guys even have their licences, I ask? Surely they are taught some level of advanced driving? Surely the “Pigs” (as many refer to them) who get to drive public-owned or kindly sponsored vehicles need to go through some sort of screening process?

For this reason, as well as the fact that they break the laws they are supposed to be upholding, I am personally not too fond of the metro police. It seems that nothing can be done about it either. So where does it leave us?