10.45am — “Baby, apparently there is a big storm coming! So please drive safely! Love you lots.”

4pm — The mildest storm I have personally experienced took place for a mere 30 minutes.

I don’t know who heads up your viral marketing division or if you even have one. But I would seriously like to start one after witnessing yesterday’s mammoth storm hype.

If I could get half the hype of yesterday’s fiasco for my business, I would be rolling in the big buck pretty quickly! 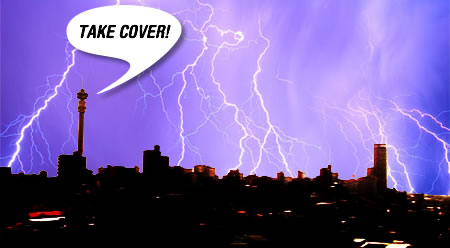 It all started when I received an SMS in the morning from my lady warning me about the storm. I initially thought it was just her being the typical sweet girl she is. I looked outside and saw what looked like a very pleasant sky all around.

Next, a few of my employees mentioned there is an expected thunderstorm approaching Johannesburg. Again I never took much notice and continued with my day.

Later in the afternoon, as the skies began to get a tad overcast, I got an SMS from my insurance company warning me of the alleged storm. Now I was worried — not only about a massive storm plowing through Jo’burg, but mainly about the classic Ford Mustang we’re towing for a customer; if this baby gets damaged by hail I’m going to have a big problem on my hands.

Secondly, if I do drive my own car home and I get hail damage, will my bastard scum insurance company deny my claim and justify it by saying it had sent me a warning? Can it even do that?!

As the storm and my paranoia grew in tandem I arrived at my office as the skies began to pee. Drizzle falling down on us, we offloaded the Mustang and stored it in the safe workshop. We watched the skies and couldn’t help wondering what the poor guys in Thailand felt like when they saw a 20-foot wave headed their way. Sure this wasn’t as drastic as that, but all the hype and marketing around this storm really had us thinking it was going to be a special one.

At about 4.45pm I received a call from my partner: “It’s a hoax! They just announced it on the radio, someone has been playing the fool!”

I then realised that this “someone” would be a valuable asset on my marketing team. How on earth did he/she create this massive hype? And more mysteriously, why? How could I legally replicate such a mammoth campaign at minimal cost to promote the product and services my business offers?

Hail hoaxer, are you out there?