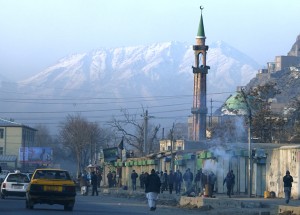 “All that has to happen is for the Taliban to lob a couple of hand grenades over the walls of one of the guesthouses,” the security consultant told me. He traced an imaginary trajectory over the roof of the guesthouse into the courtyard with his can of beer. “Then you’ll see how quickly the foreign mission in Kabul evaporates. All these expats will be gone overnight.”

This was just before an assault on another guesthouse. In the wake of this massacre – 18 people were killed – most UN staff were evacuated; even low-life independent consultants like me got two weeks at home: an unexpected little bonus on the back of the misfortune of others.

I had hardly been gone and I was back again to a double whammy of impenetrable Kabul traffic and increasingly wet and frosty winter weather – and to a fortified guesthouse that felt decidedly less secure than before. Continuing to stay in one would be foolhardy. 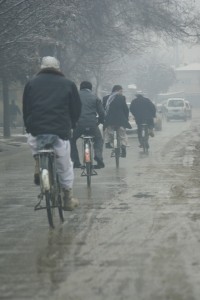 I started looking around and eventually managed to get a room in a private house with some journalists. “We are happy here,” one of them told me. “The people in this quarter hate the Taliban, and nothing has happened here in a long time, but one never knows. Tomorrow we may think differently.” It turned out that he once had a relationship with an Afrikaans woman while living in London. And when they broke up she told him, “I thought you were different, but you are like all the others.”

Ai tog … he was a person of colour, you see.

From the outside the house was nondescript, indistinguishable from the others in the block. The property had 7m-high walls with barbed wire and hidden security cameras on top, and an armed guard on the inside. Two huge metal-clad doors, reinforced with a steel drop-bar, blocked the gate, and when one entered through the pedestrian entrance, one found oneself in a locked steel cage.

The chowkidar, or butler, was a gentle old man who had worked for the French embassy before the Soviet invasion. He refused to respond to my broken Dari, as he was very proud of his own broken French, the language in which he proceeded to give account of his adventures: how we was flown to France for medical treatment after a serious car accident involving a vehicle from the Russian Embassy. When he was not cleaning the house or stoking the wood burners, he sat in his little room at the back of the property quietly reading from a large, old-fashioned edition of the Qur’an.

There was a familiar, quasi-colonial normalcy about the dispensation behind these high walls, which contrasted starkly with the chaotic conditions in the streets outside. And in the mornings, as one waited in the steel gate at the entrance for the taxi to arrive, an armed guard at one’s side, one felt a bit like an expendable extra in Fight Club waiting for his turn.

One Thursday afternoon I arrived back from work only to remember that there was going to be a party, a real expat party with people from all corners of the world. Among them was a wandering young woman from Cape Town, who had been working in the Far East. She was actually brought up English, she explained, but still spoke a bit of Afrikaans. South African red wine flowed and loosened tongues. My group sat Afghan-style on the carpet in front of the wood burner, pillows abounding as if on the set of Sherezade.

“How long have you been here?” an older Brit asked me.
“Not so long. On and off over the last five months.”
“Not long!” he exclaimed. “More than a couple of months in Afghanistan is already long term!”
“Have you heard about that woman in Kandahar?” a Canadian woman asked. “One of her children was sick. She wanted to go and buy medicine, but was alone at home.”

In this setting the words “have you heard…” seemed to be vested with deeper meaning. Everybody knew instantly that the story dealt with yet another of those implacable Afghanistan-style dilemmas: the woman needed permission to leave the house, yet she also needed to get help for the child. Would the child die because she couldn’t go out? Or would she go out and be punished? It was a situation with Shakespearean potential, and even the Brit fell silent.

“She took her six-year-old boy along as her chaperone,” the Canadian continued. “And she got the medicine and the child was fine.”
“So what’s the catch?” the Brit asked.
“Well… on the way back she lost her balance and grasped at the arm of a man, so as not to fall. So the little boy told the family that his mother had touched another man – then her family chopped off her fingers.”
“Terrible,” an American girl said, and there was momentary silence around the stove.
“More drinks anybody?” the Brit asked and got up to fetch another bottle of wine.
“Have you heard about the couple that eloped?” he asked upon his return and started to fill the glasses. “They came from some or other village up north, fell in love and ran off to Pakistan. Needless to say, the families were furious, because she was supposed to get married to somebody else.”
“How old was she?” the Canadian woman asked.
“No idea … the point is that the families managed to convince them to come back home, saying that all was forgiven. And they accepted this … but when they got back, they were handed over to the Taliban to be judged – and both were stoned to death.”
“I’m not sure I believe that one,” the Canadian woman said. “You sure it isn’t just another story?”
“Here’s another one,” the Brit said. “When the Taliban conquered Kabul, they went into the zoo and started killing animals. One Talib jumped into the lion cage. ‘Who’s the lion now??!’ he shouted, shaking his fists and all that. The lion, his name was Marjan, had not been fed for some time and gobbled up the Talib, an unexpected little bonus. But the next day the Talib’s brother came, and lobbed a hand grenade into his cage.”
“Oh no!” the Canadian woman said. “Did the lion survive?”
“No…” he said mercilessly.
“Aahw!” the woman jammered, which allowed the Brit to deliver the punchline.
“There are no happy endings in Afghanistan…”

Much later I found out that the story was only partly true. Marjan survived the attack, but was seriously injured, losing his hearing and an eye. His mouth was also badly damaged that he could no longer smell or taste, and eventually lost all his teeth. In time he became partially paralysed and stopped moving about.

And yet, when the Americans invaded, Marjan the ‘one-eyed lion of Kabul’ was still there, one of the few surviving animals in the zoo. He was famous throughout Afghanistan by now. The people looked after him, because they felt that the old lion had suffered, just like them, and respected his bravery. When he died of old age and weakness ten years ago, the people even gave the old African a proper funeral and they still place flowers on his grave.

The Pashto words on his gravestone read as follows: “Here lies Marjan, about 23 years old. He was the most famous lion in the world.”

Early one morning the sound of a terrific explosion rolled over the city. Then there was silence.

“Nou ja …” I thought, rolled onto my other side, and slept on. Probably insensitive, yes, but what can one do?

References:
Several newspaper articles were written about Marjan after the US invasion. This is an excellent ‘local knowledge’ article. The pics of Marjan and his grave have been taken from this site.

Conrad Steenkamp is a social anthropologist and writer. In 1976 he and some friends founded a youth group optimistically dubbed "South African Youth and Future 2000". It brought together young people from different backgrounds for discussion and exchanging views, an unusual experience at the time. He left South Africa in 1985 to avoid deployment in the townships during military camps. For the next seven years he lived in Munich, talking politics, selling bratwurst in an underground station, working as an English teacher, painting houses, and writing a script for New Constantine Film. He got a bursary from the Heinrich-Boell Foundation of the Green Party, which enabled him to continue studying in Germany and later in Switzerland. In 1994 he returned to South Africa, overqualified and with great ideas - and just in time for affirmative action. For the next two decades he worked as a consultant in land reform, community-based natural resource management, protected area and World Heritage Site management, cultural and heritage tourism, and marketing. This included a six year stint as a post-doctoral fellow at Carnegie Mellon University, in the course of which he set up and managed an international research network focusing on protected area management and transboundary protected areas in southern Africa. He recently worked in Afghanistan, the Netherlands and now the UK. His first novel, Thomas en die gat in die Heelal (Thomas and the hole in the universe) was awarded the Ernst van Heerden Prize for Creative Writing. He is hard at work on a set of novels. “Ons is ‘n bastervolk met ‘n bastertaal”. Breyten Breytenbach, 1973. (We are a bastard nation with a bastard language) http://conradsteenkamp.wordpress.com/