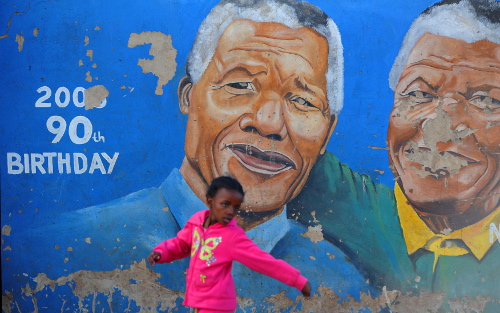 Nick Griffin, prejudice and Mandela’s greatest gift to us…

By Coenraad Bezuidenhout on 13 June 2013

British National Party leader Nick Griffin reminds us it is not only in South Africa where public personalities revert to the most basic prejudices to advance their cause or please their followers. Labelling former president Nelson Mandela a “murderous terrorist” may be an extreme example, but those who like public recognition often revert to such tactics to sidestep developments that may side-line their interests.

Section 9 of the South African Constitution prohibits discrimination of all sorts, yet politicians and opinion-makers are not shy to mobilise racial prejudice to their advantage. Think Gauteng Premier Nomvula Mokonyane’s recent “white gevaar” outburst, Pinky Khoabane when she’s got Helen Zille in her aim, AfriForum preaching victimhood to conservative Afrikaners and Peter Marais now trying to pull an AfriForum on coloured people in the Western Cape.

It’s also not limited to South Africa where it goes beyond express or implied racism. Despite his muted subsequent support for same-sex unions, President Jacob Zuma has made some homophobic statements to impress an audience before. But then we have arguably seen worse in France recently when that country belatedly legalised gay marriage. So too, a recent parliamentary spat between Australian Prime Minister Julia Gillard and the leader of the opposition of that country suggested that it is not only Floyd Shivambu that can raise the ire of the farer sex.

The rough and tumble of public life can lead politicians and opinion-makers into making some pretty callous remarks, even when the desire to demonstrate a legitimate point may be perfectly sincere. In this regard witness Zille referring to South Africans moving from the Eastern Cape in search of better services and opportunities in the Western Cape as economic refugees, an unfortunate term to use to refer to communities where xenophobic violence is always close to the surface. For this, she has since registered some apology.

Should Madiba still have been active on the public stage, what would his reaction be to Griffin? I bet it would not be far off his reactions to other assaults on his dignity. Assaults, such as those of Margaret Thatcher, who also once thought of him as a terrorist; or, such as that of Louis Luyt, who prized his ego more than dragging the former president to court — an action he would arguably not dared have taken in days of white presidents.

Mandela would recognise the rights of public opponents to express their opinions and prefer certain actions within the law. He would most certainly have defended his position spiritedly, but also with dignity. Most likely, he would also have opened the door to people coming together by extending his hand.

This is important, because if anything, Griffin’s callous quips, as well as the many examples — the local and international examples listed above, as well as those which were not — remind us that there is one important thing that we have not yet done. We have not yet chosen to fully receive Madiba’s greatest gift to us: the gift of his example.

Coenraad Bezuidenhout has a masters degree in political economy and a decade's worth of experience in economic policy and public affairs. He currently heads up the Manufacturing Circle, a private sector lobby group representing - you guessed it - South African manufacturers. He writes here in his personal capacity on any issues of immediate interest related to politics, economics, public affairs and the arts.