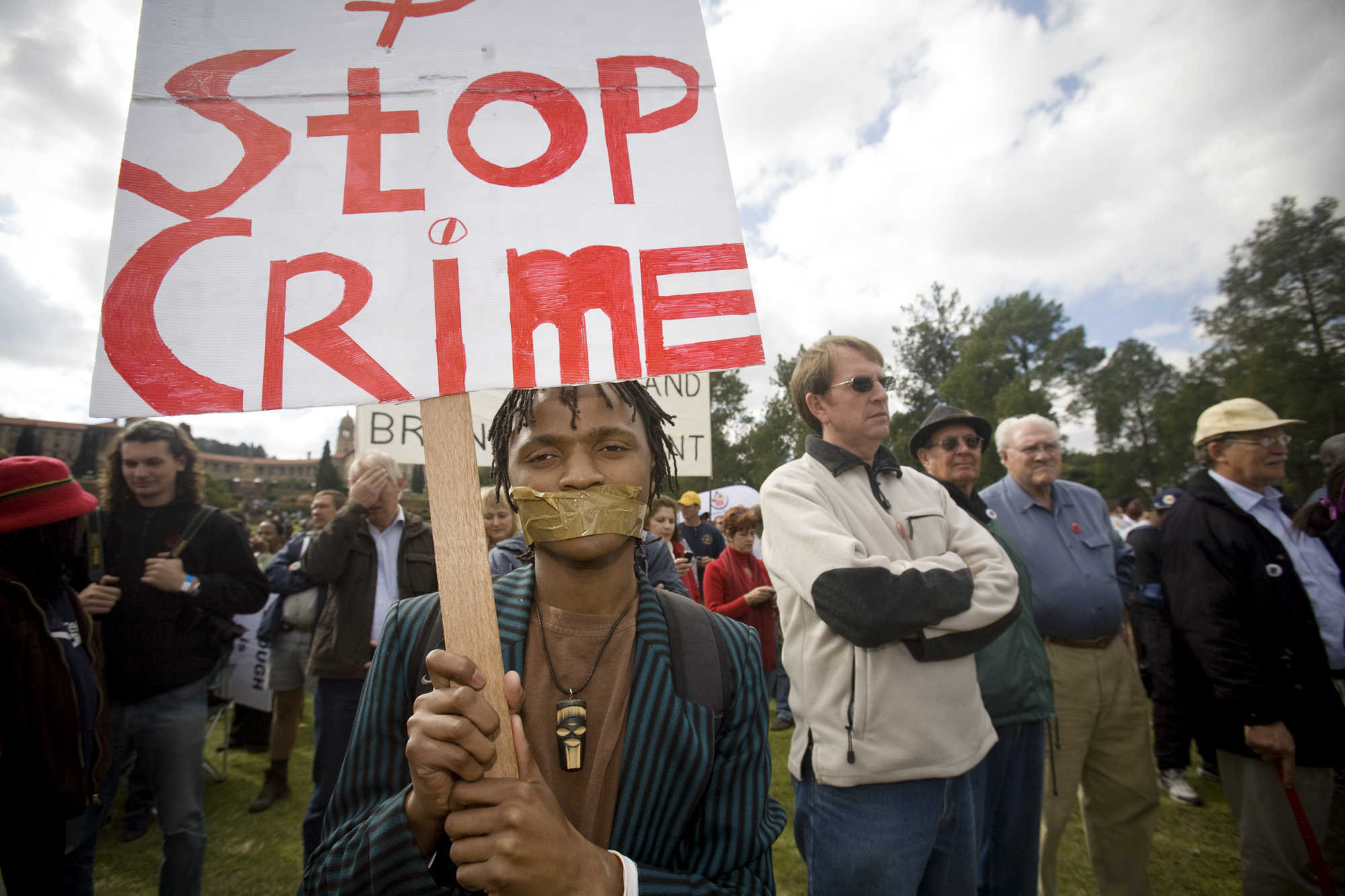 What do parents of rape victims think of crime stats?

By Charlene Smith on 9 September 2011

Last year a close friend and neighbour who lived two houses away was murdered. As he lay bleeding to death on the floor of his bedroom after being hit on the back of his neck by a laptop — so hard that the laptop bent — I am sure my friend would have been pleased to consider that he was one of “only” 43.6 murders a day in South Africa.

I phoned the Parkview police three times and waited 45 minutes for the police whose offices were one kilometre away to arrive, frustrated I finally phoned a friend at The Star newspaper and asked her to take it to the top. Police arrived within 10 minutes, but failed to call an ambulance, I had to do that.

Forget the fact that the city of Boston is concerned because they had 45 murders for the whole year last year. Or that more people are murdered and raped in South Africa each day than in any war zone.

Releasing new figures on Thursday, the South Africa Police Service told us that 56 272 people were raped in South Africa between March 2010 and April 2011 — that’s 4 689 women, men and children each month. Or about 156 a day or seven reported rapes every hour. Reported rapes — and we know that on average that for every person who reports a rape, 10 don’t. And given the fact that sexual offences units in the police no longer exist and the hard time women, children or men have reporting a rape, I would suspect that more than 10 “fail” to report rape.

At some stage toward the middle of last year it occurred to me that of the six or so rape survivors I voluntarily counselled each week, there had not been an arrest in a single case, nor had there been in any of the cases I dealt with in 18 months. I checked with six rape organisations and they reported the same.

Why should anyone fear raping a woman, man or child if they know they will probably get away with it?

It is hard to understand upon what Gareth Newham, an analyst who heads the Institute for Security Studies’ crime and justice program, based this comment to Bloomberg News: “There has been a very big improvement” in South Africa’s crime statistics, “We have seen quite a big shift in a number of reported crime categories. The police are doing a better job and there are a lot more of them.”

Really? Murder goes down from 47 a day to 44 and we should celebrate? Bloomberg noted that South Africa’s murder rate is still more than six times higher than that of the US, according to US Disaster Centre data.

Phindile Kunene of the Congress of South African Trade Unions commented: “Many [rape survivors] are reluctant to lay charges [because of] the insensitive and at times hostile reception received when laying charges and the inaccessibility of the justice system …

“Further evidence suggests that the largest increase in rape and sexual attacks have been against children under the age of seven. Some quoted reports indicating that a woman is raped in South Africa every 17 seconds.”

For those rapists who actually get arrested and appear before the courts they might find themselves before a judge like South Africa’s new Chief Justice Mogoeng Mogoeng (appointed by President Jacob Zuma, who was acquitted of a rape charge before becoming president). Mogoeng’s position was ratified despite an international uproar including women Nobel laureates protesting.

A report released by the South African Litigation Commission gave examples of why:

• In 2005, Mogoeng reduced the sentence of a man convicted of attempting to rape a seven-year-old girl from five to three years. Mogoeng acknowledged that her vagina had been penetrated, but found that it was not clear whether this happened with the man’s finger or his penis, as her face had been covered by her dress. Mogoeng said “the complainant is seven years old and the injury she sustained is not serious”.
• In 2007, while Mogoeng upheld the conviction of a man found guilty of raping a 14-year-old girl, he said one “can safely assume that [the accused] must have been mindful of [the victim’s] tender age and was thus so careful as not to injure her private parts, except accidentally, when he penetrated her. That would explain why the child was neither sad nor crying when she returned from the shop, notwithstanding the rape”.

This is what one mother wrote to me: “I am the mother of a child who was raped in Johannesburg as a five-month-old infant. I am appalled, shocked and horrified to learn of Judge Mogoeng’s views on child rape and spousal rape. In the case of a child there is no excuse, NO EXCUSE, that mitigates the horror and pain of forced sexual contact and the abuse of power and trust between child and adult. The South African courts and South African society have made it quite clear that child sexual assault is a crime that merits the punishment of the offender to the fullest extent of the law. It is quite inconceivable that we have a Judge who refuses to uphold this regardless of his personal views. The Esteemed Mogoeng’s views on spousal sexual assault are equally backwards and worrisome. That President Zuma would recommend such a person for the high court indicates that he has not learned anything from his own legal troubles in this regard.” Her child, now nine, has been in a psychiatric institution for the last two years with problems directly related to the rape.

This from the mother of a child who was raped as a four-year-old in a Midrand nursery school, “A three-year sentence on a rapist who takes our children’s virginity away is just not on. They should be sentenced to life in prison — throw the key away where it should not be found. He must just rot in the nearest hell.

“The pain that he caused our family and my child is more than three years. I am still suffering my daughter’s rape that happened nine years ago. I always look at my girl and wonder if she still remembers what happened to her. I know that she does because she will tell me about things that happened long before that. As I write this, I am in tears. The pain strikes deep in your heart. No one knows how you feel. I remember one day I was crying to my eldest sister about what happened to my child, she said to me, ‘do not worry because your daughter is HIV negative’. To me it was not just about HIV, it was the whole thing.”

In both these cases although there were arrests there were no convictions.

In the case of my friend’s murder, another neighbour, who is a lawyer with powerful political connections, and I investigated. We were consistently able to pull information before the police could, whether tracking cellphone use, the progress of his car, possible suspects … the police officer investigating the case tried hard but he was seriously hampered. The average cop investigating murder at Hillbrow has 200 dockets, it is impossible for them to even open them all, never mind investigate them. We, as privileged civilians — a journalist and a lawyer — were consistently able to get further, faster, than the police.

When it was the Soccer World Cup they had to leave their offices to make way for those providing safety for soccer tourists. I offered my home for officers to work from; we bought one police officer a computer because he had none. In the end we knew who the two masterminds behind the killing were, one was a South African woman, the other a Nigerian gangster.

The police were too frightened to move on the gangster. Another man who bought one of my friend’s stolen cellphones was arrested, he is not the killer, and a year later he has yet to appear before court. No one has been arrested for my friend’s death. And no one will be.

Published in Gender violence and News/Politics

Charlene Smith is a multi-award-winning journalist, author and media consultant. She has had 14 books published, one of which was shortlisted for an Alan Paton award. Television documentaries for which she has worked have also won awards. She has worked as a broadcast journalist and radio-station manager. Smith's areas of expertise are politics, economics, women's and children's issues and HIV. She lives and works in Cambridge, USA.