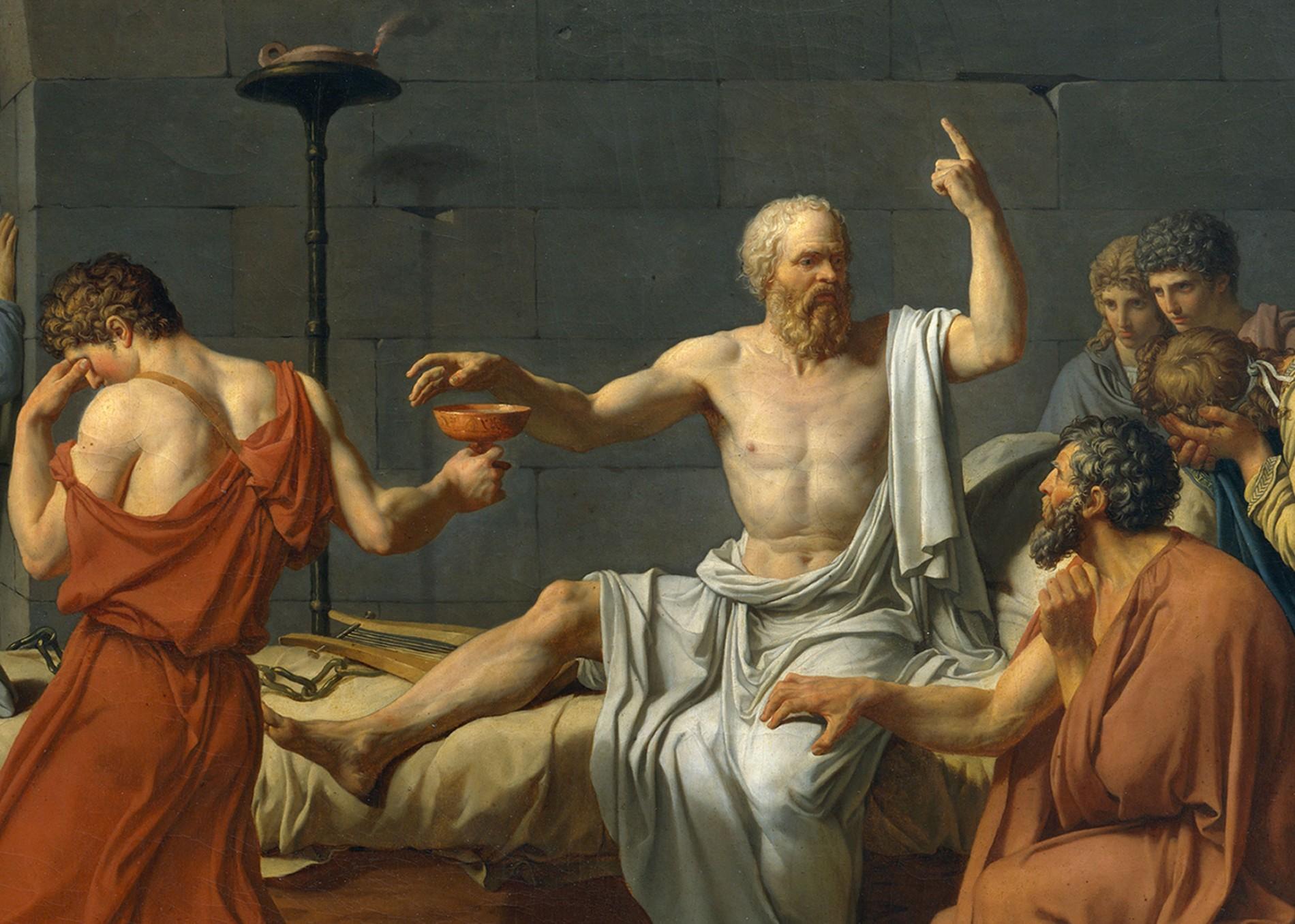 Socrates and philosophy: Not honouring the gods of the city

Socrates, the philosopher who was the teacher of another (even more famous) philosopher, Plato, was condemned to death by a jury of his fellow Athenians in 399 BCE, allegedly for leading the youth of the polis (city-state) astray or “corrupting” them — essentially, for encouraging them not to honour the deities of the city. Socrates had to drink (neuro-poisonous) hemlock, and although he had the opportunity to escape from prison with the help of his many sympathisers, he refused to do so. What the jury had done was within the law, and besides, he had always only obeyed his “daimon” (spirit, conscience), so death was not to be feared.

The deities of the city, of course, were the ancient Greek gods, foremost among them the protectress-goddess of Athens (Athena), and whereas Socrates is depicted, in Plato’s Republic, for example, as showing cursory obeisance to the city’s religious practices — such as praying to a goddess during a religious festival — the charge derived from Socrates’s  custom of questioning politically important people on topics such as “justice”, in the process demonstrating that they actually knew very little about it, while erroneously believing the opposite.

Understandably, therefore, although Socrates had a loyal following in the city, he also had many enemies, who saw their interests being threatened by Socrates’s practice of showing people, through philosophical dialogue, how to think for themselves  — even if he cautioned them that the only thing one could be certain of is how little one knows (known as the Socratic “docta ignorantia”).

In the light of Socrates’s paradigmatic example, one could characterise philosophy as a practice which “does not honour the gods of the city”, where such “gods” stand for the ideologically powerful practices or symbols that govern life in a community or society — for example the church during the Christian Middle Ages, the state during the modern era of the rise of the nation state, or corporations in the present era of the hegemony of neoliberal capitalism.

In the course of history, Socrates was not the only philosopher who paid a high price for his philosophical independence of thinking. Another one was the Italian philosopher Giordano Bruno who was burned at the stake in 1600 CE, for daring to suggest that the Earth was not the only planet where rational, technical beings existed. His reasoning was simple: if God is infinite (as orthodoxy claimed), and is the cause of the universe, then it follows that the universe had to be infinite, and that there are innumerable worlds where intelligent life flourished. For this deviation from church doctrine he paid with his life.

Sometimes philosophers who rejected the “gods of the city” did not pay for it with their lives, but endured other forms of censure, such as Bertrand Russell, who took a principled stand against nuclear armament, once spending time in prison for his stance. Russell’s unwavering moral resistance to “the bomb” — working and practising activism ceaselessly to convince the British government to abandon nuclear weapons for the sake of human survival — still stands as a beacon of moral courage for philosophers (or artists, or “ordinary people”, for that matter; we are all just human beings, after all) who feel similarly compelled to take a stand against some or other abuse of power.

There are those “philosophers” who put their philosophical training in the service of the “gods of the city”, of course — called “bread thinkers” by Arthur Schopenhauer in the 19th century. I recall a colleague telling me with (misplaced) pride that his son, who had studied philosophy at a local university and had succeeded in getting a lectureship at his Alma Mater, decided to give up the academic life to go and work for a corporation as their “philosophical consultant”. I expressed my doubts about whether his son would be able to continue practicing philosophy as an independent, critical discipline when he was in the service of a corporation — dedicated to the pursuit of financial gain — to which he responded with an uncomfortable laugh.

The reason why I am writing about this hallmark of philosophy  —  dishonouring the “gods of the city”  —  is because we live in an era where these gods (as metaphor for the most powerful ideologies of the present, as well as for their representatives) are more powerful than ever before. This is mainly because they are underpinned by the tremendous force of capital, as well as of advanced technology, including mainstream media technology. In the face of all this power it is difficult, if not completely impossible, for most people to “dishonour the gods of the city”, that is, to resist the incessant mainstream media messages that circulate in cyberspace, whether it is on our mobile phones, our laptops or our tablets.

Particularly because, with the advent of advanced communications technology, everyone who can handle a mobile phone can contribute their opinions (in ancient Greek, “doxa”, which was distinct from epistemé, or knowledge) to ongoing conversations, whether these opinions are well-founded or “shoot from the hip” drivel, it is difficult for most people to distinguish between what is “true” (note the scare quotes!) and what is patently false.

Small wonder it is said that we live in the era of “post-truth”, implying that, given the uncontrollable glut of information assaulting our senses every day, it is virtually impossible to separate the true from the false, reliable news from “fake news”, and so on.

Nevertheless, every “normally functioning” human being is capable of thinking, and of comparing different views on any given topic, but more importantly, anyone is able to search for the grounds on which certain claims are made, and comparing those with the grounds on which these claims are denied or questioned. And when such grounds or evidence for claims is not available, or accessible, do not accept them. Groundless claims are accepted at one’s peril.

To be more specific, think of the stated aims of the World Economic Forum (WEF) that, among other things:

“Covid-19 lockdowns may be gradually easing, but anxiety about the world’s social and economic prospects is only intensifying. There is good reason to worry: a sharp economic downturn has already begun, and we could be facing the worst depression since the 1930s. But, while this outcome is likely, it is not unavoidable.

“To achieve a better outcome, the world must act jointly and swiftly to revamp all aspects of our societies and economies, from education to social contracts and working conditions. Every country, from the United States to China, must participate, and every industry, from oil and gas to tech, must be transformed. In short, we need a ‘Great Reset’ of capitalism.”

And further, that: “The Covid-19 crisis is affecting every facet of people’s lives in every corner of the world. But tragedy need not be its only legacy. On the contrary, the pandemic represents a rare but narrow window of opportunity to reflect, reimagine, and reset our world to create a healthier, more equitable, and more prosperous future.”

All of this sounds laudable, and it is not beyond the realm of possibility that it may lead to an interesting future — which, if it should come to pass, may not be all that terrible. It all depends, you might say, on how we get there.

Therefore, compare the above imaginings for the future with the highly disconcerting information in this video, which examines an allegedly leaked document from the Canadian government.

When you do, one is faced with the dilemma, referred to earlier, of being smothered by a plethora of (often contradictory) information, which is paralysing, to say the least.

So, from the perspective of the Socratic lesson, that one should not honour the gods of the city — that is, that one should mistrust those serving the most powerful ideologies because it is in their own interest to consolidate and maintain their power over you — what should one do when confronting the very different messages represented by the two sources of information, above? Try to do what Socrates taught us: examine every claim to validity or truth, particularly with regard to the grounds (or evidence) on which these claims are made, and then make up your mind, always recalling Socrates’s cautioning remark, that the only thing we know is how little we know.

In the case before us  —  the apparently contradictory “messages” from the WEF and the video by the animated Irish character, respectively —  consider that the WEF seems to be very open about their agenda, to the point of outlining the three different “components” of the Great Reset, although it is not very clear how they intend getting there. On the other hand, the Irish watchdog-person states clearly at the beginning of the video on the leaked Canadian Report that he has “not been able to … verify the authenticity of this information”, but proceeds to read and discuss it for viewers’ benefit — so that (as he says) they can judge for themselves.

The only problem is that it is very difficult to judge for oneself, in the absence of the means to verify that this account of what happened in the meeting referred to is accurate. It seems “plausible”, as our Irish commentator points out. But is plausibility sufficient? Not without further evidence; remember, “plausible” is not the same as “credible” —  it refers to something that seems probable or reasonable. Hence, although —  as a philosopher, who is not inclined to honour the “gods of the city”, given their power —  I regard the WEF with a great deal of suspicion, I cannot, without further evidence, accept the account of the “leak” our internet activist discusses in the video, above.

Time will tell, but remember Heraclitus’s dictum: “Expect the unexpected!”