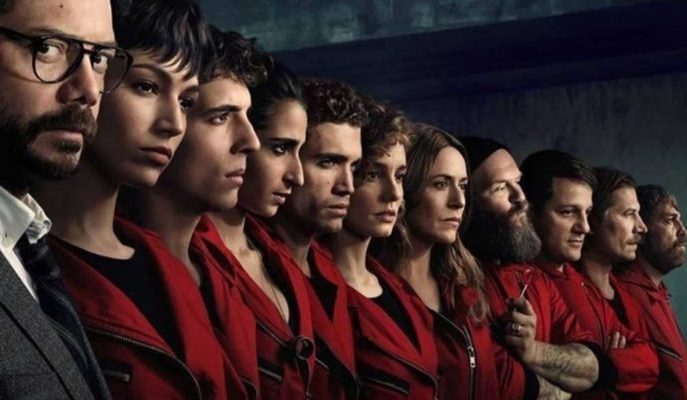 A Spanish song of resistance

One of the great joys in our shared life is that, in the evening after the day’s work — seven days a week for both of us — my partner and I relax, either reading together from a novel, or watching a movie, or a television series. We recently finished that astonishing novelistic feat of magical realism by Colombian author, Gabriel Garcia Marquez, A Hundred Years of Solitude — not an easy read, but a rewarding one — and are now enjoying a much lighter, but still profoundly insightful, literary adventure by literary professor turned novelist, David Lodge.

Intermittently we have been watching several movies and series, by far the best of which has been the Spanish Netflix series Money Heist created by Alex Pina. The badly translated English title obscures the sharp irony of the original Spanish title La Casa de Papel (The House of Paper).

If anyone is like me, it doesn’t make an iota of difference to know how the story of a film or novel unfolds — what matters is how it is done. But if you don’t want to know, don’t read further because there could be some spoilers.

As some who have not seen the series may guess by comparing the two titles, The House of Paper is a reference to the Spanish Royal Mint, where bank notes are printed, or “created”. The “paper” in the title is a reminder that bank notes are just that — bits of paper — which we endow with significant symbolic value. This insight plays a fundamental role in the series narrative, insofar as The Professor, the leader of the band of “thieves”, who meticulously plans and directs the heist at the mint, believes that they are, strictly speaking, doing nothing wrong. After all, during the time that they occupy the mint, together with a number of hostages (mint employees), they print almost a billion Euros’ worth of new banknotes, so no one could accuse them of stealing money from anyone else.

There is a scene sequence where the so-called Professor, who planned and orchestrated the heist from a location outside the mint, confronts the police inspector who unsuccessfully tries to arrest him in his hideout. When she tells him that she does not want to listen to him any longer he says:

“You don’t want to hear me? Why don’t you want to hear me? Because I’m a bad guy? You’ve been taught to see everything as good or bad. But what we’re doing is okay to you when other people do it. In the year 2011 the European Central Bank made 171-billion Euros out of nowhere. Just like we’re doing. Only bigger. One hundred eighty-five billion in 2012. One hundred forty-five billion Euros in 2013. Do you know where all that money went? To the banks. Directly from the factory … to the pockets of the rich. Did anyone say … that the European Central Bank was a thief? ‘Liquidity injections’, they called it. And they pulled it out of nowhere. Out of nowhere.”

The professor picks up a 50-Euro note from his desk. Returning to the inspector he holds it up and asks: “What’s this?”

Then he tears it into little scraps and insists: “This is nothing, Raquel. It is paper. It’s paper, you see! It’s paper. I’m making a liquidity injection … but not for the bankers. I’m doing it here … in the real economy. With this group of … of losers, which is what we are, Raquel. To get away from it all. Don’t you want to get away?”

The complication here is, of course, that The Professor, or Sergio, and the police inspector, Raquel, have fallen in love. While she faces the duty-inculcated task of having to arrest him, he has to deal with the unanticipated consequences of his love for her — the fact that it has adversely affected a near-perfect plan. (Don’t worry, I won’t tell you how the first or second seasons end, although there is more to come.)

Most of the action happens inside the mint where the thieves — clad in red overalls and wearing Salvador Dali masks when dealing with the police  —  have to keep the hostages (also in red overalls) calm and under control. This while Nairobi — all the robbers, except The Professor, had to choose a city name for themselves — commandeers some mint employees to assist her in printing the notes they intend absconding with.

Predictably, not everything proceeds smoothly in the complicated plot of this series, although The Professor anticipated virtually every conceivable contingency and how to respond to it. The person in charge of the mint (Berlin), who is connected to The Professor by an untraceable telephone cable, has to make some difficult decisions that lead to other difficult, life-and-death decisions. In the meantime, the director of the mint  —  who has just discovered that his mistress, who is also his secretary, is pregnant — wants to thwart the robbers.

If this sounds like just another bank-heist series, let me disabuse you of that thought immediately: it is not. It is a “revolutionary” series, a story of resistance (as you may already have inferred from The Professor’s words to Raquel), to the capitalist lie, which is that it is an economic system that everyone benefits from equally.

Ever since the financial crisis of 2008, against the backdrop of which this series must be seen, the gap between the rich few and the many poor — the 1% and the 99% — has been conspicuously widening, and the series plays on this. In her 2017 book on Donald Trump, No Is Not Enough, Naomi Klein highlights this fact with reference to Trump’s reality television show, The Apprentice, as follows:

“What’s interesting about this particular piece of televised class warfare, which aired in 2007, is that the pretence sold to a previous generation — capitalism was going to create the best of all possible worlds — is completely absent. No: this is a system that generates a few big winners and hordes of losers, so you’d better make damn sure you are on the winning team.”

The “robbers” in Money Heist have internalised this hard lesson, and are determined to get their share of the money that is created from thin air for the rich, but arguably minus the exploitation that typifies the system. In fact, as several commentators have remarked, there is a Robin Hood-motif that pervades the narrative — in the first episode of season two the thieves shower ecstatic people in the streets of Madrid with banknotes worth 140-million Euros from blimps above them and, soon after their occupation of the mint, the public gathers outside in support.

But the best thing about the series is that, for some or other serendipitous reason — which is explained in the documentary about the show’s phenomenal success — a certain song was chosen for paradigmatic “revolutionary” and celebratory scenes. The song is called Bella Ciao (Goodbye Beautiful), and dates back to the 19th century when women who worked in rice paddies for rich padrones in northern Italy sang it in protest about the harsh conditions under which they toiled. In Italy, during World War II, the Italian resistance movement (against Mussolini’s fascists) adopted the song, changing its lyrics, and since then it has been sung by many groups and individual artists.

Bella Ciao is a rousing resistance song, and it captures the spirit of the series perfectly; several times The Professor tells his comrades that they should not forget that they “are the resistance”. It is not difficult for anyone — like myself — who detests exploitation or injustice of any kind, to get caught up in the song’s spirit.

One commentator remarked that it was only in the scene where the thieves celebrate breaking through the concrete floor of the mint to start digging their escape tunnel in the soil by dancing and singing Bella Ciao, that she finally grasped what the series was really about.

Published in Lifestyle and Media