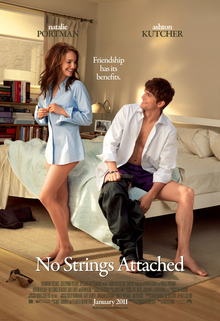 When is sex just sex, and when does it amount to ‘making love’? ‘Making love’ is an interesting construction, of course, and is usually a reference to having sex, but – considering the verb, ‘making’ in conjunction with the noun, ‘love’, implies much more than — even if it includes — sex. Ivan Reitman’s charming romantic comedy (‘romcom’), No Strings Attached (Paramount 2011) takes this issue seriously, in a manner of speaking, by demonstrating just when ‘having sex’ becomes ‘making (that is, generating) love’.

Although the movie appeared eight years ago already, my partner and I only viewed it last night, after a friend recommended it, and were delighted by its inventiveness and psychological insight. Sure, being a ‘romcom’, it was utterly predictable regarding its ending, but the highly entertaining way in which it arrives at the ending was not. And it features one of my all-time favourite actresses, the outstanding Natalie Portman, this time in the company of leading man, Ashton Kutcher. Together, they portray two young people (Emma and Adam) who — at the insistence of Emma (Portman), who cannot deal with the obligations and reciprocities demanded by conventional relationships — enter into a supposed non-relationship ‘with no strings attached’, where they have all the ‘benefits’ of (lots of) mutually enjoyable sex, with none of the ‘disadvantages’ and responsibilities invariably accompanying ordinary, intimate relationships between a ‘boyfriend’ and a ‘girlfriend’.

I won’t reconstruct the entire plot here — most readers probably know it, or else there is Wikipedia; suffice to say that, when Adam discovers that his father is sleeping with his ex-girlfriend, the quasi-incestuous nature of the sex has a devastating impact on his imagination, which he can only deal with by excessive inebriation in the company of his friends. This is followed by an uncontrollable wish to get laid, which he tries to precipitate by dialling the telephone numbers of all the girls on his mobile at random, resulting in his arrival at the apartment shared by Emma and three friends (all of them medical doctors at a hospital in Los Angeles), where he ‘performs’ naked before passing out on the sofa.

When he wakes up the next morning he has no recollection of the previous night’s events, and Emma takes him to her room to get his clothes. One thing leads to another and they end up having sex, Emma having admitted that she thinks a certain crucial body-part of Adam’s is beautiful. The experience is evidently sufficiently memorable to induce in both the need for a second time around, and Emma – who admits that she lacks certain social skills and predilections – suggests that they enter into the eponymous ‘no strings attached’ (non-)relationship, governed by certain ‘ground rules’ (such as no holding hands in public, not cuddling up, not declaring their mutual love, and so on – all the things that ‘normal’ couples routinely do). However, Adam slips up by bringing Emma a present in the shape of a humorous ‘menstrual mix’ CD, which she disapproves of, and this, together with some other annoyances on her part, results in them cooling things for a couple of weeks at her insistence. Ironically Emma is the one who becomes jealous when Adam conspicuously spends time in the company of other women, and they resume their ‘fuck-buddies’ relationship, of which the visual representations are a pleasure for the viewer’s eye, clearly communicating the mutual enjoyment they take in each other. This is crucial for what I want to argue further regarding love and sex.

Although Adam had previously cautioned Emma against falling in love with him, he turns out to be the one to confess his love for her first, after having persuaded her to go on a ‘real date’ with him on Valentine’s Day, and performing all kinds of romantic gestures, to Emma’s chagrin, resulting in a terrible fight between them – which is what leads to Adam’s declaration of love. Predictably, this leads to the end of their ‘agreement’, to which Adam resigns himself, having scored a success at work in having a script of his accepted for filming, largely because of the intervention of someone who likes him – the assistant director, Lucy, of the musical show.

This is a romantic comedy, so it is to be expected that the narrative will follow the usual pattern of ‘boy meets girl, hooks up, breaks up and loses girl, both go through period of ‘suffering’ before getting back together for good’. I won’t spoil the fun for people who haven’t seen the movie by filling in the rather delightful details of this reconciliation, but I do want to employ the narrative to make some observations on its unfolding as it does. After all, this is no ordinary ‘romcom’; it is one that explicitly pits love against sex, through the female protagonist, who perceives them as being mutually exclusive, at least in a certain sense.

But let me be more specific: For Emma, whose self-image is presented, from the beginning (when she and Adam meet as teenagers at a summer-camp), as someone lacking affection for other people, any hint of ‘love-behaviour’ is a distinct turn-off. She comes across as a reliable, very rational person — she is a medical doctor, after all – who eschews all behaviour that smacks of sentimentality and encroachment on another’s privacy and autonomy. She wants to be in control — which is a bit paradoxical, considering that sex is one of humanity’s capacities where too much (and perhaps too little) control could be disastrous – the element of letting-go, of abandoning oneself to what Slavoj Žižek has described (somewhere), rather elliptically, as ‘the richness of one’s instinctual endowment’, is crucial for sex to be the ‘best’ it can be.

There is the rub, as it were: the ‘best’ it can be. Recall that I remarked on the supposed equivalence of sex and ‘making love’ earlier? When sex is really good, whether one wants it to or not – and Emma does not – it surpasses its own bounds; it becomes ‘making love’, that is, ‘generating love’. Emma discovers this to her dismay after about six weeks of not seeing Adam, and predictably, eventually has to admit to herself and to Adam that she has fallen in love with him.

Here we have another giveaway expression that demonstrates the wisdom of language: ‘to fall in love’ – one does not choose to fall in love, you ‘fall’ into that ‘divine madness’, as the ancient Greeks thought of love, willy-nilly, whether you like it or not, as Emma finds out, initially believing that she has lost her man through her own folly. Love is not anything that can be controlled – if you haven’t read it, read award-winning writer, George Saunders’s short story, ‘Jon’ for an exemplary demonstration of the life-giving chaos that love brings into a facility where everything is aimed at optimal control.

What I mean by this is succinctly phrased by one of Canadian novelist and psychoanalyst, Robertson Davies’s characters in his novel, What’s Bred in the Bone (Macmillan, 1985), where he or she (I can’t recall the gender) says something like: ‘Sex is the most wonderful thing that God, or nature, has given us; but handle it carefully, because if you don’t it will bite you!’ Sound advice. Which is why sex is best when it is lovemaking. 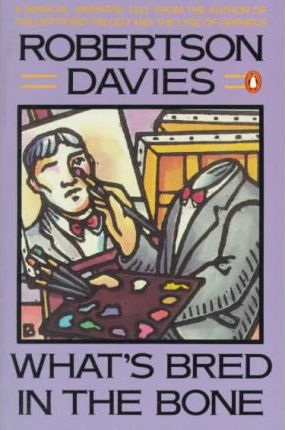