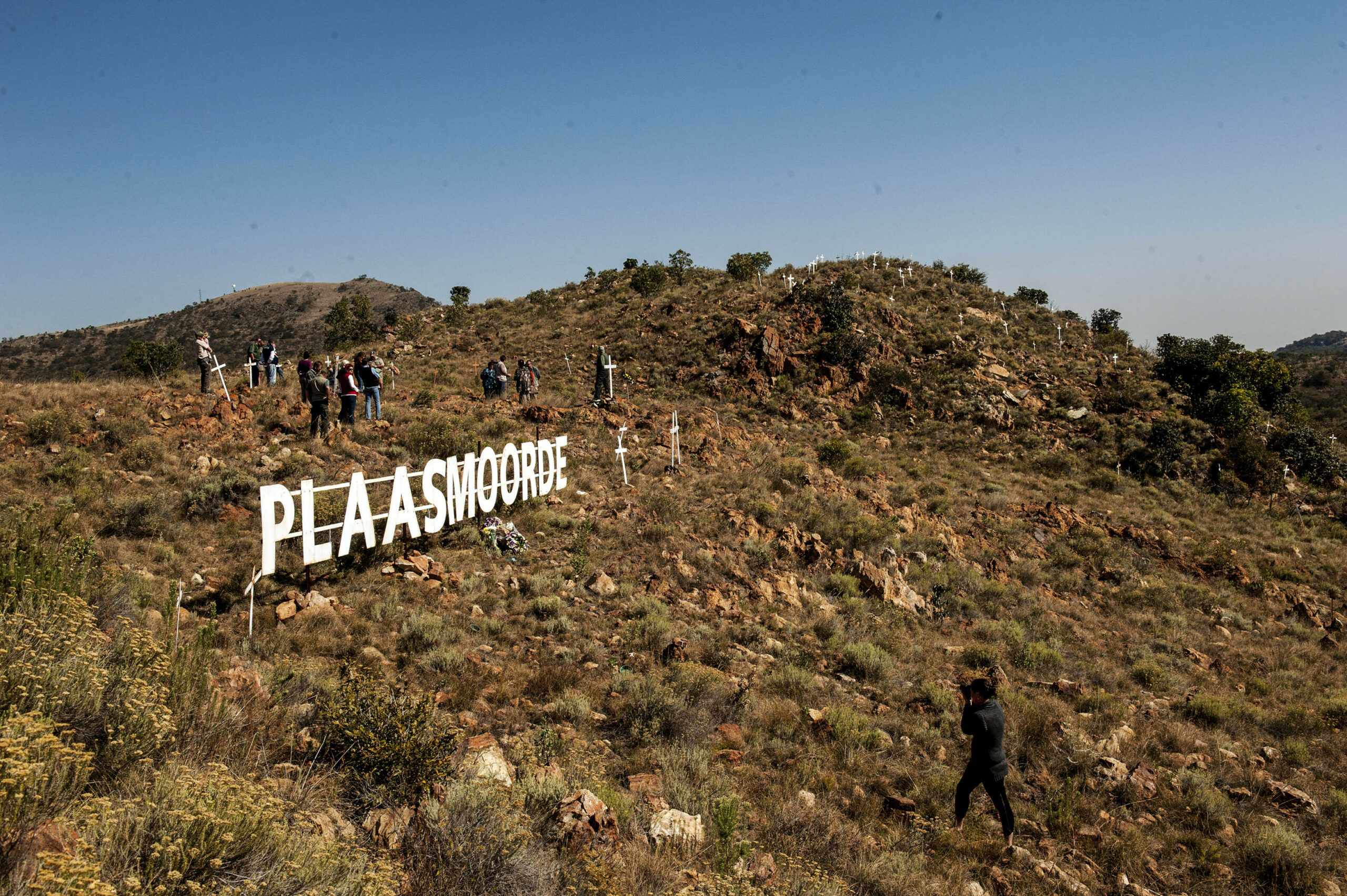 Conspiracy theorists rarely fail to bemuse and astound.  No matter what counter-evidence you provide to try to dissuade people of a certain delusion, proponents of a theory are often steadfast in their commitment. The swiftness with which reality can be denied and the dexterity with which empirical evidence can be manipulated or rendered irrelevant frustrates many people when arguing with advocates of outlandish conspiracies. It is precisely this dynamic in which the intoxicating potency of conspiracy theories is located. They are not primarily concerned with unmasking grand truths or thoroughly assessing the validity of facts: conspiracy theories are about the art of manipulating our political imaginations.

Conspiracy theories can be so alluring because they pierce into our minds, stirring our mightiest fears, confirming the validity of our sociopolitical anxieties, and penetrating the heart of our discontent and dissatisfaction.

When a person bemoans the killings of farmers, they’re often not just expressing innocent shock or sadness. On social media, in certain news outlets and in personal conversations, the reality of farm violence and murders is often twisted to tell us a specific story: white farmers are terrorised by brutal, almost barbaric violence. The cruelty of the killings, often committed by black people, is evidence that the violence is racially motivated.

The ANC government underplays the severity and prevalence of these sadistic killings. Why? Because the ANC, the face of black political power, does not care for the lives of its white citizens. Some people would go further and claim that the ANC, or black political power in general, is actively interested in the demise of white South Africans. The extreme conclusion to this story gravely warns that farm murders signify the beginning of a white genocide.

Violence menaces all sectors and people in our society. The killing of any innocent human being, whether a white farmer, a child, woman or man, can never be justified. The fact that those living in farming communities and rural areas are isolated from urban spaces and police services does mean they are more vulnerable to crime and the violence that often accompanies it. Yet the reality of rural crime and farm murders is being exploited and engineered into a political narrative to advance a sinister agenda.

The violence endured by people employed on farms, as well as the violence endured by black  citizens living in rural areas, are often omitted from the politicisation of farm killings. Placed in a larger context, farm murders can be seen as one of the numerous issues which plague the country. But facts don’t matter to proponents of white genoicde.

What matters to people seduced by this narrative, is how this story mirrors their perception of reality. For an increasing number of white citizens, farm murders are an extreme crystallisation of their discontent and their dissatisfaction with their place in the new South Africa. The narrative of farm murders acts as a horrifying testament to their supposed victimhood.

It’s not unusual to encounter white anxiety. Although anxiety is a universal human experience, this overbearing and frustrating feeling of unease can be stimulated and sustained by sociopolitical forces, specifically forces that trigger tumultuous change. When some white people dub black economic empowerment as “reverse apartheid”, or ramble nostalgically on how the country was a safer place during apartheid, what I hear beneath the ignorance of these statements is the expression of a deeply lodged anxiety.

The end of apartheid, in the political sense at least, meant not just the demise of an authoritarian regime but the loss of power for white citizens. Power has multiple purposes. It can function as an instrument to advance one’s interests, but power is often critical to the building of identity. It grants psychological security to its beneficiaries, telling you who you are and where you belong in a social order. To mask its brutality and justify its irrationality, white supremacy, manifested through the policies and legislation of the National Party (NP), constructed an elaborate world of illusions.

To understand the nexus of white discontent and, therefore, grasp why farm murders are politicised, we need to assess the illusions that are the bedrock of some forms of white identity. Fear is a valuable instrument in the pursuit of power used to control and subordinate. The success and sustainability of apartheid required the passivity of white people in the face of oppression and their eager participation in the project. These dual functions were executed by instilling fear in white citizens.

The NP reminded white people not only of the privileges they had been granted, but of what they stood to lose and the onslaught they were likely to suffer if black people were to gain power. The NP, entangling its ideology into every sphere of public and private life, built on the mythology of black power being a destructive force nourished by a craving for revenge and, therefore, posing an existential threat to white South Africans.

The spectre of black revenge has waned over the years. But it is still a nightmare that looms in the crevices of some white imaginations. The stubborn reluctance of the apartheid government to give up its power was aided by a serious fear of retribution from the ANC, be it through organised violence or harsh economic policy.

As well as offering privilege to white citizens through the subjugation of their black counterparts, apartheid promised protection from the black masses. Through its draconian policing, a mighty military and an efficient surveillance state, dissent and supposedly destructive revolution could be avoided. With the transition to democracy, many white people had to learn to live alongside the “natives” they for so long feared and misunderstood.

The hyperbolic narrative of farm murders feeds on a fear that already exists; a fear that saw its genesis the moment this land and its people were subdued by a conquering settler population.  Rarely is the racialised hue in which these stories are coated questioned. The sight of white bodies bruised, battered and maimed acts to confirm their worst terrors.

I recall once asking a white friend, no older than 21, why she was so eager to emigrate after graduation. With little hesitation and real sincerity, she said that the future for white people in South Africa looked grim. And she didn’t want her kids to be raised in a country where they would face persecution for being white. Somewhat stunned and almost amused, I thought: “What South Africa is this person living in?”

It isn’t a coincidence that often those who proclaim farm murders to be a national emergency or part of a genocidal plot also believe that this country is becoming increasingly inhospitable for white people. Farm murders, as a grossly politicised narrative, act as apparently indisputable evidence of a social and political climate that is unwelcoming of or deliberately hostile to its white citizens. The question must be asked: Are white people victims of persecution? Is genocide on the horizon for the white race in South Africa?

What the stats say

A 2019 report by Stats SA compounds the depressing reality of racial inequality. Black people occupy 46% of the unemployed population, whereas less than 10% of white people are unemployed. According to the same report, the earnings of white people are about three times those of black people. As explained by statistician-general Risenga Maluleke, “The average annual earning among black people was R6 009 in 2006 and R9 186 in 2015, while the figures for the white population were R77 308 in 2006 and R100 205 in 2015”.

These glaring disparities in wealth, income, poverty and employment mean that white people are more likely to enjoy good health, job opportunities, financial stability, upwards class mobility and access to education of a decent or high quality. When visiting private hospitals and schools, walking through pristine suburbs and glamorous estates and seeing who crowds our sites of luxurious leisure, it is abundantly clear that most white South Africans enjoy a level of comfort unknown to the majority of the population.

What then fogs the vision of some white people, luring them into a false belief that their wellbeing in this country is under threat? To those accustomed to dominance, the pursuit of equality can feel like an attack. In our recent history, power ― whether the right to own property or the liberty of political expression ― was once unfairly distributed and concentrated in the tightly clasped hands of a few. Democracy is a project of empowerment, executed through the fair and just distribution of power. For this to happen, the privilege of those who occupied a superior status must be drastically diluted.

This mission of radical empowerment, initiated in 1994, has largely been derailed. Minor attempts have been made to enact justice. Affirmative action policies are an example. As justified and as necessary as these policies may be, they have done little to place holistic and substantial power into the hands of the country’s destitute. Our country remains one divided and stratified by race and class.

One consequence of their relative wealth, security and comfort, is that many white people indulge in an ignorance of and insensitivity to the lives lived by those outside their communities. Whether they are simply oblivious or actively disinterested in the inequities that the country inherited, as well those that burden the new South Africa, a blindness to injustice means white people will often misunderstand efforts to rectify it.

Moreover, talk of racial injustice or oppression often has to deal with the crimes committed by colonialism and apartheid on behalf of white people; crimes that many whites still benefit from today. A reluctance to delve into our country’s past and understand history through the eyes of the formerly subjugated results in white folk wrongly assuming that they’re being bullied or unfairly characterised as the villains of our nation.

For conspiracy theories to grow in popularity and permeate political discourse, they require zealous advocates. Ironically, the most predominant evangelists of white genocide and its connection to farm murders reside outside South Africa. White nationalists and the celebrities of the “alt right”, in co-operation with traditional conservatives, from the United States, Canada, Australia and across Europe, have been responsible for propelling white genocide to being a popular talking point. Populists and propagandists such as Lauren Southern, Katie Hopkins,  and Steven Molyneux have partaken in a relentless campaign to convince white audiences of a plot orchestrated by the ANC or some mysterious black political forces to exterminate South Africa’s white population.

Within our borders, organisations such as the Suidlanders, Afriforum and, recently, the Democratic Alliance (DA) use farm murders to inflate fears and exploit anxieties to pursue dubious political objectives. The DA has declared farm murders a national emergency, and is currently pushing for the incidents to be considered a hate crime by law. I doubt that the party is genuinely concerned about the safety of rural communities. Rather this move is clearly an attempt to draw the votes of a white and conservative voting base. Political commentator Jaime Mighty recently highlighted how the politicisation of farm murders exposes the hypocrisy of these political groups: “The people who talk about farm murders do not talk about township murders and suburban murders.”

What people are willing to believe unmasks how they perceive reality and how they relate to the world around them. The death of political apartheid and the birth of democracy offered an opportunity for white South Africans to confront their history and see what wounds 300 years of oppression had left on the present. But, beyond introspection, freeing themselves from fear or  shattering illusions imposed by white supremacy, democracy meant a chance for white people to contribute towards improving the material wellbeing oppressed people. False narratives, conspiracy theories and reactionary populism delay such necessary progress.