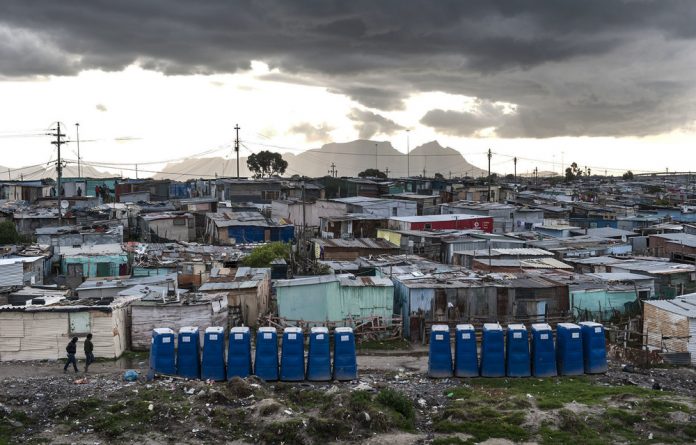 It all began on April 1, perhaps a bad omen. Lockdown had been in force for less than a week when I received a call from a chief director in the department of human settlements, asking me to join a conversation with the minister at 4pm. It came with a draft document that sought to co-opt our NGO, the Built Environment Support Group (BESG), and 14 others, in assisting with the government’s “response” to the coronavirus.  I agreed to participate on a no commitment basis.

My enduring memory of that conversation, in light of events that unfolded over the following days, was a plea: the government needed us to help them navigate in informal settlements, because they might otherwise encounter hostility. My suspicion was already aroused by the strategies outlined in the draft “social compact”, which were the provision of temporary shelter, “de-densification” and resettlement. Press headlines screamed “forced removals” — our first since the dawn of the new dispensation.

These measures were all designed to “enforce social distancing” and “ease congestion” in response to Covid-19. Human Settlements Minister Lindiwe Sisulu asked the civil society organisations (CSOs) what we thought the government’s priorities should be. It was not to relocate masses of people onto land that was not identified, planned, nor serviced, or build more transit camps — “temporary resettlement areas” in the official jargon — which we know are lost and forgotten once they are built.

No, the most immediate priority during a hard lockdown was food and water.

How do you wash your hands when the water station is empty or the tanker does not arrive?  And toilets, when you have 20 people sharing a pit latrine that has not been emptied for years.

Over the Easter weekend, my colleagues and I worked day and night to draft a detailed response to the departments of human settlements and water and sanitation. We set out an action plan with clear time frames: short term (0-3 months, emergency response), medium term (3-24 months, upgrading informal settlements and providing serviced land where needed), and long term (24+ months, things that require legislative/regulatory changes).

The early weeks of the relationship between the departments and CSOs were full of good intent but tumultuous. More headlines spoke of us collaborating with the plan to “de-densify” 29 informal settlements, but they remained wrapped in secrecy for many more weeks.

We had steadfastly rejected any such plan — it was coercive and designed to fail.

I asked, “How much land do we need to achieve a desirable population density?”  No response. Where is all this land that has evaded us in our attempts to house the nation for 26 years? A vague response: “It has already been identified.”

The relationship became strained over three key issues. Firstly, co-option. Not only had the department tried rather clumsily to co-opt us into an unsound agenda, they had tried to colonise our language. The minister responded to public claims of planning forced removals by saying, “It is just a matter of terminology.  We have to get used to talking the language of the CSOs.  We call it de-densification. They call it reblocking.”

It was a complete hijacking. Reblocking is a community-driven planning process that facilitates the provision of basic services in informal settlements. It has nothing to do with reducing population density, as if that alone would prevent the movement of people within their communities, where access is often by narrow footpaths or simple spaces between shacks, mostly with no drainage.

The second issue of contention was evictions and the illegal demolition of structures without a court order, from eThekwini to Cape Town. This persisted in spite of a ministerial directive that all evictions and demolitions should cease during lockdown, and severely strained relations. How can one cooperate with a government that is rendering people homeless when they are supposed to be confined to home?

The third, and most immediate tension, was around travel restrictions to carry out essential services. BESG undertook to monitor the roll-out of emergency water and sanitation in 15 of our partner communities across KwaZulu-Natal. Two of our staff were given essential service travel permits by the department, but that did not stop them being turned back at four roadblocks on their way back from our first planning meeting in my front garden to the CBD.  We were asked to identify two to three champions per community who could facilitate access to emergency services on the ground. After weeks of inquiries, we were told that it would not, after all, be possible to grant them essential travel permits.

One cannot go into a settlement empty-handed when people are starving. We tried linking up with four conduits for food aid, including the Solidarity Fund that was supposed to facilitate the release of 250 000 food parcels within the first two weeks of lockdown. That supply was mysteriously diverted to an NGO that appeared to spring up overnight, the Action Development Agency, with a mandate to distribute food aid across the province. Yet a whole month later, on April 30, local media carried a story showing kwaito stars in a warehouse in Camps Drift, Msunduzi, still packing bulk food into smaller parcels for distribution.

It is estimated that approximately 50% of food aid is sourced and distributed privately, by faith-based groups, retail stores, neighbourhood groups … all of whom were banned from travel during the hard lockdown. The weekly soup kitchen run by Mama Ntombi’s Community Projects in Ezinketheni stopped coming. Pietermaritzburg and District Care of the Aged was told to hand their small food aid distribution to targeted households over to the department of social development —  the very same one that was embroiled in a R22-million tender for blankets for the homeless.

The reality was that only a trickle of food reached the neediest during the worst circumstances that they had to endure. What the pandemic did bring to the public attention was that food insecurity is a daily reality for many households, and when the tenuous sources of food aid are stopped, the situation can become life-threatening.

I was shot down for suggesting that the department of cooperative governance and traditional affairs, which is custodian of the disaster management regulations, was creating conditions where people were starving by severely restricting access to essential travel permits.

Part of the R500-billion Covid relief funding approved by the national joint command was a R20-billion budget to roll out emergency water and sanitation. Rand Water was contracted by the minister to be the national implementing agent. Almost immediately the cracks started appearing in the supply chain. Every water storage tank in the country was diverted into the roll-out, but, due to builders’ merchants being closed, it was impossible to source bricks, sand and cement to build plinths for them.

Once the situation was rectified, more headlines came blazing —  a JoJo tank that cost R5 500 to buy came with a price tag of R27 000 once installed.

The department of water and sanitation presented its roll-out plan in a PowerPoint presentation dated April 21. It stated that 50 water tankers had been purchased for uMgungundlovu District, supplied, and were “in operation”.

The weekly reports we submitted from our communities to the national department painted a picture of haphazard, unplanned and uncoordinated responses, and little evidence of the tankers on the roads.

Of our 15 partner communities, only four reported a reliable water supply.  Most areas received an additional supply of standpipes or water storage tanks, but you still need to put water in them, and ensure the supply is adequate for the population.

The 1 000-strong Nkanini community in Eshowe relies on two standpipes, but they ran dry for two whole weeks during July. Mkondeni Sacca in Msunduzi had their water supply increased by 200% — a marked improvement? Not when there are still only six standpipes shared by more than 1 500 households. Still, these “improvements” in service delivery only came about due to Covid-19.

The situation with sanitation is worse. It is not prioritised and most settlements are too dense to allow honeysuckers access to empty pit latrines.

This is where reblocking comes into play, but it is not a short term solution — it needs careful planning, community buy-in, and alternative land to relocate households in the path of services.

Two communities in eThekwini, Bhambayi and Foreman Road, depend on communal ablution blocks, most of which were closed for repairs. There is nowhere else to relieve yourself but in the bush – in the middle of Durban.

Some were luckier – the community of Denmark in Msunduzi live in formal houses funded by the Danish government. They had their pit toilets emptied for the first time in four years – all thanks to Covid-19.

While the emergency response to the pandemic has brought some relief to indigent communities, anywhere that large sums of public funds are involved becomes a target for the vultures. It created conditions for a bigger, faster gravy train of corruption than we have ever seen before.

Investigations were launched by the special investigating unit, the auditor general, and the premier’s office into inflated tenders for everything from PPE to food aid, water supply, and the supply of “transitional” housing. It is proving to be the biggest test of the presidency, not only of his authority, but also his credibility to deal decisively with the elephant in the room of the governing party.

On the ground, communities see very little has changed — funds that are intended to deliver services are freely looted by the politically connected, and their disillusion just goes deeper.