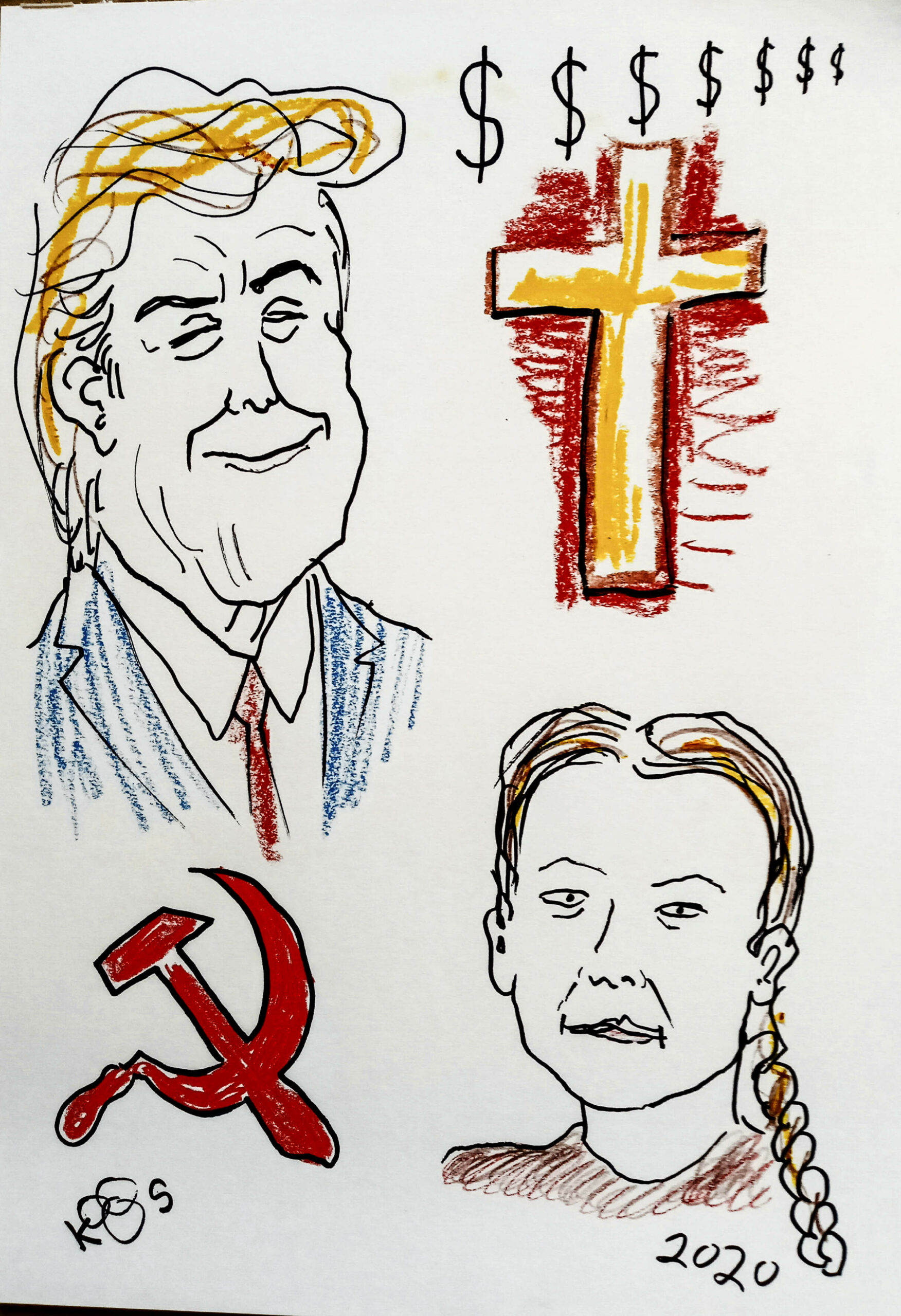 In the year AD323, Christianity became the official religion of the Roman Empire. That is probably why we still imagine, today, that modern history started more or less in the year 0.

It is a sobering thought to ponder how many of our cultural memes, our general education, our values and our inherited collective subconscious, both good and bad, have their historical roots in the moment when Jesus was born in that manger, surrounded by Mary and Joseph, some curious farm animals, and three wise men.

Because there are no pictures or paintings of him, we have long assumed that Christ resembled Jan van Riebeeck with sandals. Only recently did we realise that this is probably not true. We also realised, to our shock, that not even Jan van Riebeeck looked like Jan van Riebeeck.

In the year 2020, we are not very sure of anything any more.

The church has lost its authority. Elvis is dead. Few of us still remember the lyrics of I Wanna Hold Your Hand. We are being bombarded by near-miss asteroids virtually every other week. Climate change is suddenly far more real than we would have liked to believe. The coronavirus pandemic has ruined most of our holiday plans.

What has brought us to this point? Are there any viable ideologies left?

Only two people in the world seem to be absolutely sure of what should be done and where we are heading.

One can hardly imagine two ways of thinking more at odds with one another.

The one ideology is being trumpeted by a 70-year-old man with a lunatic stare and unkempt hair. The other one is proclaimed by a 17-year-old teenager with a mild case of autism.

That’s where we are now. This is the crossroads modern society finds itself in.

Greta Thunberg, of course, is not a politician. In fact, she has gone back to school now (though she has Fridays off). Her views, however, are powerful and compelling. Not only that; she wields tremendous influence. My own children, aged 18 and 20, swear by her. So do all their friends. Young people need heroes, and the sad thing is that right now we have a shortage of heroes. Mac Miller is dead. Steve Hofmeyr doesn’t have a satellite dish any more. Of course, there’s Master KG, but can one song save the planet?

In the midst of all this uncertainty, I decided to go back to my own cultural roots. I decided to go and have one more look at what the Bible, our so-called traditional source of wisdom, actually had to say to us.

A random search first led me to the words of the Apostle Paul in I Timothy 6:10: “The love of money is the root of all evil.”

Somehow, this reminded me of something Greta said in her very first televised speech, the one she got so famous for: “We are in the beginning of a mass extinction and all you can talk about is money and fairy tales of eternal economic growth. How dare you?”

I found this rather unsettling. Is our entire history of Western trade and expansion built on a lie? Was it a mistake of the first American politicians to promote economic free market competition and individualism and to say in the same breath “in God we trust”?

Then I thought about Jesus saying how hard it is for rich men to enter the kingdom of heaven. I looked for, and found, the passage where he overturned the tables of the merchants in the temple and drove them out with a homemade whip. Was Jesus the first-ever commie in history?

Digging deeper into the scriptures, though, I found the pendulum swung back. I was surprised, and a bit relieved, to read in the twelfth chapter of the Gospel of John that the disciples of Jesus actually had an economic budget.

They carried a purse. They had daily expenses and a cash flow. In their small way, they were economic participants in the society of their day.

I was also surprised to read that Jesus supported the idea of paying taxes to the government (even if the government is evil!) and obeying the basic rules of society: “Render unto Caesar…” He probably would not have supported Helen Zille’s proposed tax revolt were he alive today.

In all seriousness, what Jesus was actually saying in Mark 12:17 was that he believed there should be a separation of powers. One must give Caesar his due, but one must also give God his due.

Was that the real reason why he drove the money-lenders and shop owners from the temple? Not because he wanted to destroy their businesses, but simply because he objected to these businesses being run inside the temple?

When he exhorted, in Matthew 19:16-30, a certain rich young man to give away all of his vast resources to the poor, he suggested that this be done voluntarily, as an act of healing restitution. He did not demand that those riches be seized by violence and distributed. Jesus was no Robin Hood, in other words. Socialism and communism would want to grab the wealth of the rich. Jesus emphasised altruism and freedom of decision. Taxes should be paid voluntarily, and likewise donations towards a cause should be paid out of one’s own free will. He was not preaching any form of social engineering, his campaign focused rather on a collective change of heart.

So: is the idea of communism or socialism ever mentioned in the Bible at all?

There is a telling incident in the twelfth chapter of John which describes an awkward social situation in which Jesus had arrived at the house of friends in a rather unhygienic state, prompting Mary Magdalene to kneel down in front of Jesus and open up a jar of expensive perfume to stop his feet from smelling.

Apart from disproving those gnostics who believe that Jesus was a spiritual being who floated a few centimetres above the ground and whose feet were incapable of smelling badly, this passage is the very first critique of socialism that I know of.

Upon seeing what Mary was up to, Judas Iscariot (who, incidentally, also carried the disciples’ purse) bitterly complained (I paraphrase): “Why wasn’t this perfume sold and the money given to the poor? It was worth at least three hundred bucks!”

According to the Bible (and here I use the exact translation), “Judas did not say this because he cared about the poor, but because he was a thief. As the keeper of the purse, he used to take what was put into it.”

Modern socialists, I feel, have a lot in common with this Judas guy. They love playing the “care for the poor” card while they go about enriching themselves.

In fact, this has happened wherever, and whenever, mankind tried to make communism or socialism work.

If the love of money is the root of evil, money is a bit like alcohol.

The evil is not in the thing itself, but in our attitude towards the thing.

If money – or alcohol, for that matter – was wrong in itself, Jesus would never have touched the stuff. He would not have allowed any of the disciples to carry a purse. And he never would have done that famous trick at that wedding when he turned tap water into Chardonnay.

But I am digressing.

What we need in these uncertain times is a new way of looking at our society.

If the Bible is right, we should, instead of abolishing the free market system, look at ways to simplify it, to get our priorities sorted out.

Columnist Sonja Loots wrote in a recent column on Netwerk24 that we are approaching a new world order, in the wake of the coronavirus pandemic, which she describes as “post-materialistic”.

Is this ideal at all possible?

The Ruperts — who are capitalists — gave away some of their cash to aid the fight against Covid-19 in the early days of the pandemic.

If this could happen on a larger scale, something amazing could start happening in our world.

I once arrived at Cape Town airport with my family on the way back from somewhere, when, in the arrivals lounge, my son – then aged about 13 – turned to me and asked: “Are we not facing a shortage of electricity in South Africa right now?”

Then he pointed to a row of about 10 gigantic TV screens, right next to one another, on the wall facing us. Every single TV screen depicted the same scene. They were all visible from every part of the hall we were in. In fact, there were similar giant TV screens all over the airport.

“Then why,” my son asked in exasperation,” do they have so many TVs here? Surely one would have been enough?”

I wonder if the solution to mankind’s survival lies in this simple observation.

We should listen to our young people.

We should listen to Greta Thunberg.

And it sure won’t harm anyone if we did a bit of open-minded Bible study now and then.