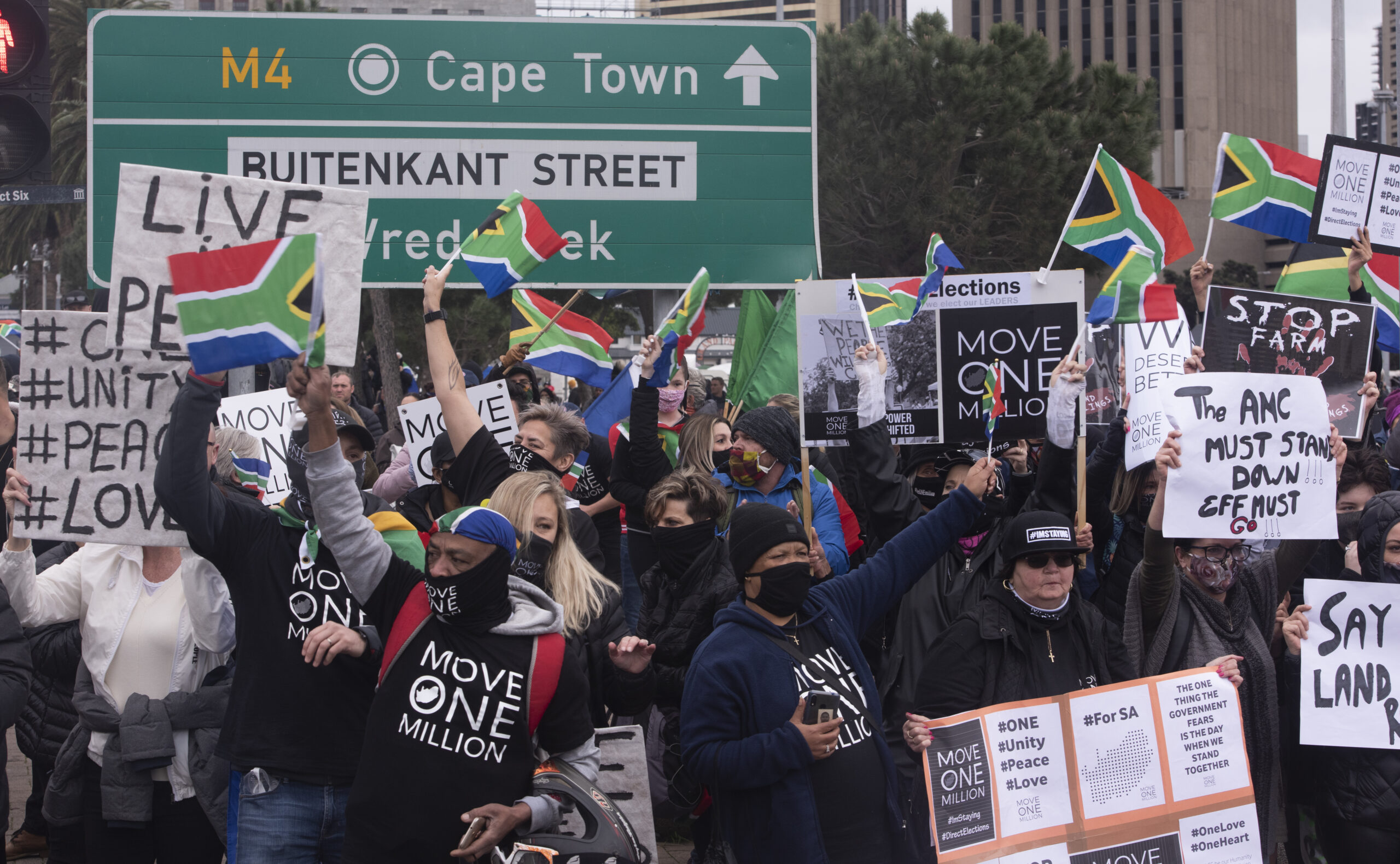 Cape independence is not a new concept. The Cape Party was formed in 2007 and has been contesting elections on an independence ticket since 2009. In 2016, veteran author RW Johnson wrote about the possibility of an independent Cape. In 2018, King Khoebaha announced the secession of the Western Cape, forming the Sovereign State of Good Hope on behalf of the Khoisan nation, serving eviction notices on the ANC. Also in 2018, CapeXit, a group seeking independence via international law, was founded.

Despite this, no one really took independence seriously. The media paid it scant attention, no major political parties supported the idea, and even those that were sympathetic, were half-hearted in their attempts. Peter Marais of the Freedom Front Plus (VF+) called for federal autonomy at the 2020 state of province address, having called for outright independence the previous year.

In 2019, the Cape Party commissioned Pretoria-based VirtuCall to run a poll, subsequently announcing that 66% of Democratic Alliance voters wanted a referendum on independence, as did 46% of all Western Cape citizens. VirtuCall had little polling pedigree, and the Cape Party only secured 9 331 votes in the provincial election, which allowed independence to be filed in the “lunatic fringe” section, despite the vehement protests of those involved in the movement.

In 2020, the Cape Independence Advocacy Group (CIAG), a political pressure group, was formed and set about establishing independence in the mainstream narrative. Based upon information provided by connections within the Western Cape DA, and the Cape Party’s polling data, the CIAG was adamant that the majority of independence supporters actually supported the DA. Further, they contended that support for independence was much more widespread than either the political establishment, or the media, were willing to contemplate.

Support for independence more widespread than many were willing to contemplate

With hindsight, the level of popular support should have been obvious. By mid-2020, CapeXit had collected over 450 000 personal mandates. These alone equate to almost 15% of the Western Cape electorate, but both opponents of independence, and sceptical would-be supporters, fixated on three issues.

Firstly, no-one wanted to acknowledge the connection between the DA and independence. The DA  itself focused on its national ambitions and was just emerging from its disastrous flirtation with racial populism. At a strategic level, it had no thought of independence. Political commentators and analysts also failed to consider the DA/independence axis, lazily equating meagre Cape Party support to voter apathy, and, in many cases, simply seeing what they wanted to see.

The independence movement itself largely failed to grasp the DA link. Both the Cape Party and CapeXit favour Swiss-style direct democracy, with both organisations wrongly projecting their own ideological affinities on to independence supporters, the majority of whom almost certainly could not care less. They just want good governance, political accountability and non-racialism.

Thirdly, independence was primarily perceived, once again with a heavy helping hand from its opponents, as a white project, driven and supported by an unenlightened minority, secretly harking back to some form of neo-apartheid, or volkstaat.

In July 2020, the CIAG commissioned Victory Research to undertake a new poll on Cape independence. The choice of company was significant. Victory Research is a highly respected polling organisation, and their chief executive, Gareth van Onselen, has very close links with the DA. Whatever results they would find were not going to be as easily waived away as were those of VirtuCall the previous year.

Then came the poll results

Those equating Cape Party votes with independence support were instantly discredited. In the 2019 election, the Cape Party secured just 0.45% of the vote, but the Victory Research poll showed that in fact 35.8% of Western Cape voters wanted independence and 47% wanted a referendum.

The myth that independence was a white project was also brutally exposed. In the poll, of those supporting independence, 56% were coloured, 16% were black, and only 28% were white. The poll also investigated why people wanted independence. Perceived advantage for a person’s own race came in dead last, with sound governance, safety, and non-racialism being the main motivations.

During August, while the poll results were being analysed, and in response to the attempts by some to portray independence as legally or politically impossible, several legal experts weighed in on the independence debate, establishing that independence was in fact legally possible.

If the Western Cape does manage to secede, then August 2020 will have been the watershed moment.

So where does this leave Cape independence?

This was a benchmark poll, the first firm reference point. As opponents of independence have been at lengths to point out, thus far it has had no significant political support. The independence campaign has been driven by a handful of small voluntary organisations, with the majority of even its own supporters questioning whether independence was possible. In this context, 36% represents an extremely high level of support, far higher than any credible analyst had predicted. The poll also charted the path forward for the independence movement.

Secession is inherently a political act, the circumstances unique in every case, but the one non-negotiable is the clear democratic will of the seceding people — in this case, Western Cape voters. For independence to become a reality, support would need to increase by 14.2 percentage points. In this regard the poll was extremely encouraging for the independence movement. Apart from the 35.8% of voters who already support independence, a further 10.2% of voters were only “somewhat opposed” to it, while the poll also established that voters were unusually open to favourably shifting their position.

The poll also suggested that the CIAG’s targeted threshold of support required to win an independence referendum, was very close to being met among both black and white voters. As is almost always the case with Western Cape politics, the coloured vote will be decisive. Coloured voters made up the majority (56%) of independence supporters, but to obtain a democratic majority mandate for independence, support within coloured communities, currently at 39%, will need to increase significantly. Even here, the poll had positive news for the independence campaign.

Among both black and white voters, there was a high degree of correlation between perceived outcomes and voting intentions —77% of black voters felt that they would be worse off in an independent Cape and 84% of them opposed the idea. In contrast, 75% of white voters felt they would be better off and 65% of them supported independence. When it came to coloured voters, however, 58% of them felt they would be better off in an independent Cape, yet only 39% supported the idea. Understanding why coloured voters would not want something they believe would make them better off, will be key to unlocking majority support for independence.

Politically, the poll is a potential game changer

The DA is now firmly on the oversized horns of an independence dilemma. Recent media coverage of independence had already shifted the DA away from complete silence to flippant dismissal, but they have done so while defending the democratic rights of independence supporters to advance their views. So, what now for the DA?

When the majority of your own voters want independence, and two thirds of them want a referendum, you can hardly preach democracy and then simply ignore them. Indeed, is not a people’s referendum the very purest form of democracy? Too often, commentators mistakenly view a referendum as a legal activity when that is not its primary purpose. A referendum is not even legally binding, but it is an unequivocal expression of the democratic will of the people. If it is not going to be utterly hypocritical, at some point, when called upon to do so, the DA Western Cape premier is going to have to call for a referendum.

Beyond the DA, the Freedom Front Plus (VF+) has already confirmed it will be supporting Cape independence in the 2021 elections, as have the Cape Coloured Congress (CCC), and, naturally, the Cape Party. The Good Party finds itself sharing the DA’s predicament — 63% of their voters favour independence.

The CIAG now has this melting pot of ingredients at their disposal. Its task will be to use them, both to bring the maximum possible pressure to bear on the DA, and to move the level of support needle ever closer to the critical 50% + 1 mark. The next phase in their campaign is to transition support from social media on to the streets, which will initially involve encouraging supporters to publicly display independence symbols, before progressing on to public events.

Sources inside the DA are already reporting that growing calls for independence are directly affecting attitudes and policies. At their policy conference last weekend, they stated: “The DA will strive to enhance the federal character of our constitutional democracy”, while talking about bringing government closer to the people, and geographically devolving power to the lowest effective level. One DA source described the party as having been “emboldened”, stating that, from an independence perspective, the party was definitely moving in the right direction.

The DA’s avant garde are undoubtedly aware that genuine federalism, if that is their intention, requires a constitutional amendment supported by two thirds of the national assembly and six out of nine provinces. It is not going to be achieved by the DA bringing a motion in the national assembly. In truth, their only realistic hope of federalism is a political compromise, fashioned in the face of a rambunctious independence movement. But is that a beast that, once released, can ever be tamed?

One thing is certain, the next few months are going to be very interesting indeed.